It was bunnies, bubbles and balloons at a garden party Thursday in Victoria where Prince George and Princess Charlotte made their second public appearance during the royal tour of the Duke and Duchess of Cambridge.

Princess Charlotte, 16 months old and ambling like a toddler, bee-lined for some colourful balloons before climbing into her mother's arms to spend time in a petting zoo with goats, rabbits, sheep and miniature horses.

The princess also took a shine to Moose, a large white poodle and golden retriever cross breed that is a cancer therapy dog when he isn't entertaining royals. Charlotte patted Moose's head and then decided to sit on the dog who was lounging in the grass.

Prince George, 3, dressed in red shorts and a blue sweater, held his father's hand, but eventually towed his dad towards a bubble making display where it didn't take him long to get hold of a squirt gun and start blasting out bubbles.

The royal play date was held in a secluded, tree-sheltered green space at Victoria's Government House, where the duke and duchess and their children have been staying on their week-long visit to B.C. and the Yukon. Musicians, puppeteers and entertainers sporting brightly-coloured costumes wandered the grounds.

Inside the petting zoo, enclosed with a white picket fence, were young 4-H Club members who were ready to show off their animals.

The party with the royals was held for the children and families of military service members who have experienced deployment.

Twenty-four families were invited to the party at Government House, the official residence of B.C.'s lieutenant-governor.

Submariner Andrew Matheson, who serves on HMCS Victoria, said his daughters, Lily and Isabelle, and his wife Kristy met the royal couple and their children.

"It was surreal at first, absolutely," he said. "They are both very personable people. At the heart, they are parents. So, I think we had a common ground to stand on as we were trying to watch our kids play and keep an eye out as well."

Asked if they mentioned whether George and Charlotte were enjoying themselves, Andrew said: "They did. They said they were having a great time, absolutely. They enjoy where they are staying here," he said. "They love Victoria. The weather's fantastic."

Lucas Kenward, commanding officer of the ship HMCS Edmonton, said the event felt like a normal, everyday family get-together with friends. He said it was amazing to see George making bubbles and seeing the family interact with their children and others just like other families would on a day at the park.

"For me, I think that was one of the most fascinating things," said Kenward, who came to the party with his wife, Andrea Callaghan and their three-year-old daughter Brielle. "It didn't feel like a scripted or forced event. It was very natural. Children did what children did."

Children's entertainer Paul Kilshaw said he spent several minutes with the family making balloons and watching William and Kate play with their children.

Prince George asked him to make balloons into a spider and a volcano.

"He started talking about volcanoes and then about lava," said Kilshaw, who made a teddy bear for Charlotte.

The young princess laughed and poked at him with a long balloon.

At one point, the young royals were on a blanket and William blew the air out of the balloon into the laughing prince's face.

Kilshaw said meeting the royals "was over the top."

"I was so honoured and so thrilled."

Kilshaw said he had been on edge knowing he would have to entertain royalty, but the Duke and Duchess made him feel comfortable.

"It was almost like talking to a neighbour," he said. "(William) said 'oh we've tried making balloons at home,' and I just love the way he was so interactive with the bubble making and everything. You can tell he really enjoys himself," he said referring to William. 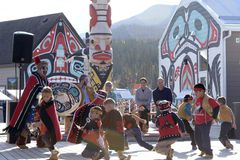 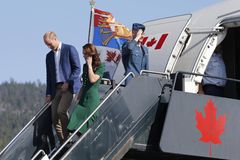 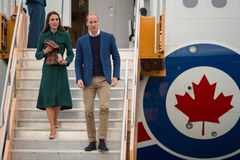