British Columbia Premier John Horgan was formally sworn in Tuesday – the first New Democrat in 16 years to hold the office – as he named a cabinet that must immediately turn its attention to a wildfire crisis that has displaced almost 46,000 people.

Mr. Horgan, whose party worked with the third-place Greens to defeat the former Liberal government following the May 9 election, acknowledged the unfolding disaster that has overshadowed the transition of power.

"As we gather, we're mindful of the tens of thousands of British Columbians who have been forced from their homes," Mr. Horgan said during a swearing-in ceremony at the Lieutenant-Governor's residence in Victoria.

Mr. Horgan said his new government is focused on managing the wildfire situation, which flared up in April and led to the declaration of a provincial state of emergency. The entire city of Williams Lake in the central Interior of the province has been evacuated.

BC NDP takes power: The big issues and the people John Horgan has appointed to handle them

Mr. Horgan, a Victoria-area MLA acclaimed as NDP Leader in 2014, acknowledged the "bittersweet" day as he and 20 cabinet ministers were sworn in. "Of course, [I am] ecstatic to have the opportunity to be the government," Mr. Horgan said.

"But there are big challenges ahead for all of us, and we are all in these challenges together, and I don't think anything typifies that more than to see families evacuated from communities."

Mr. Horgan started his day with a 7 a.m briefing on the state of the wildfires, which will be a key priority for Doug Donaldson, an MLA from Stikine in northwestern B.C., named as the new Forests Minister. All but four of the NDP caucus are from Metro Vancouver and Vancouver Island.

Outgoing Liberal premier Christy Clark was in Kamloops meeting with people affected by the wildfires. She said she hopes Mr. Horgan takes on the wildfires situation with the "vigour" her government applied to the issue over the past few weeks, and also doubles a $100-million fund the government has earmarked for communities and residents affected by the crisis. Ms. Clark said the NDP government should keep BC Liberal MLAs in wildfire-hit areas informed.

"It's not a political issue. I know that people are a little worried that this is … the worst time for the transition to a new government. It is what it is and I am confident the new government is going to keep their eyes on the ball and keep focused on this."

Ms. Clark won the BC Liberal leadership and became premier in 2011, leading the party to surprise re-election in 2013. But her second campaign as premier saw the party reduced to minority status in the legislature, setting the stage for her government's defeat in a confidence vote late last month.

She said she's prepared to serve as Opposition Leader as long as her party and caucus wants her.

Still, Andrew Weaver, Leader of the BC Green Party, whose support allowed the NDP to take power, said there is only so much the new NDP government can do about the wildfire crisis.

However, he noted there are 22 ministries, and not everyone will be focused on the issue.

Tuesday's events end the political machinations that began after the May election in which the BC Liberals were reduced to 43 seats in the 87-seat legislature. The NDP took 41 seats and the Greens won three.

For weeks, it was unclear who would govern with support from the Green Party. However, the Greens eventually struck an agreement with the NDP and the two parties voted last month to defeat the Liberals in a confidence motion.

Mr. Horgan named a gender-balanced cabinet of 20 ministers and two ministers of state. Six MLAs have been named parliamentary secretaries.

Two past leaders were named to prominent posts. Carole James, who led the party in two elections after it was ousted from power in 2001, is the new Deputy Premier and Finance Minister. Adrian Dix, who led the party to defeat in the 2013 election many expected the NDP would win, is the province's new Health Minister.

High-profile critics are also now in cabinet. Lawyer David Eby, noted in NDP circles for defeated ex-premier Christy Clark in her Vancouver riding in the 2013 election, is now Attorney-General. Jinny Sims, a former Surrey NDP MP and president of the BC Teachers' Federation, is the new Minister of Citizens' Services. And Vancouver-Mount Pleasant MLA Melanie Mark – the new Advanced Education Minister – is now the first Indigenous woman to serve in cabinet.

Mr. Horgan said the new NDP cabinet will have its first meeting at 8 a.m. on Wednesday, with an agenda that includes building relationships with other governments. He said he regretted being unable to attend this week's meeting of premiers in Alberta, but that he was tied up with managing the transition of power in B.C.

"It was just impossible to get this done any faster than we did," said Mr. Horgan, adding he has been talking to premiers from Alberta, Ontario, and Quebec as well as the federal government.

In an interview, rookie BC Liberal MLA Jas Johal noted that, with 43 seats, the Liberals are now the largest opposition in B.C. history, and they are poised to transition to a new role of holding the NDP to account.

"We are prepared to hold this government to account. If they don't hold the confidence of the House, we'll see what happens." 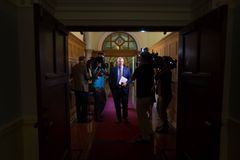 In B.C., Liberals’ crises suddenly became the NDP’s problems
July 18, 2017
BC NDP will take power in the midst of provincial wildfire emergency
July 17, 2017
Follow Ian Bailey on Twitter @ianabailey
Report an error Editorial code of conduct
Due to technical reasons, we have temporarily removed commenting from our articles. We hope to have this fixed soon. Thank you for your patience. If you are looking to give feedback on our new site, please send it along to feedback@globeandmail.com. If you want to write a letter to the editor, please forward to letters@globeandmail.com.
Comments