The stuntwoman killed on the set of the feature film Deadpool 2 in downtown Vancouver this week overshot her mark, struck a curb and was thrown from her motorcycle, says an initial report from the provincial occupational safety organization.

While witnesses have described what they saw, the WorkSafeBC report released Friday provides a more specific account of the accident that killed 40-year-old SJ Harris of New York.

According to the report – based on interviews with employer representatives on the site – Ms. Harris, a well-regarded motorcycle racer in the United States, had rehearsed a stunt that called for her to ride her bike in an area cordoned off by the Vancouver Police Department.

Ms. Harris, aboard a Ducati Hyperstrada 939, was instructed to ride through the open doors of a building, across a concrete pad and down a ramp built over three stairs. She was supposed to stop on the landing.

"During the first shooting of the scene, the stunt driver continued driving beyond the planned stopping spot on the stairway landing, and continued to drive down a second ramp built over the bottom stairs and across the roadway," the report says.

"The motorcycle struck the concrete sidewalk curb, the worker was thrown off the motorcycle and propelled through a plate glass window of the building."

Ms. Harris suffered fatal injuries. Her death is the first of a stunt performer on the job in British Columbia's production sector since 1996.

Kevin Elliott, president of the American Sportbike Racing Association, who knew Ms. Harris, said Friday that her assignment sounded rather easy and that she had the skills to execute it.

"From that description, that's a pretty simple, straightforward manoeuvre," he said from Fort Worth, Tex., after being read a summary of the stunt in the WorkSafeBC report.

Mr. Elliott said the manoeuvre is the kind of thing many aspiring riders might do early on in their training, adding that it sounded very "doable" on a Hyperstrada 939, which he described as being on the "bigger side" of motorcycles.

Asked about Ms. Harris's ability to do the stunt, he said, "It should have been well within her wheelhouse to do that."

Ms. Harris considered herself the first African-American woman to become a professional road racer, beginning her career in 2014.

According to a report in Variety, Ms. Harris's manager got a call from the producers of Deadpool 2 – who include its star, Vancouver native Ryan Reynolds. They were searching for an African-American woman who could start work on the film as soon as possible and ride a motorcycle at high speed. "This was an opportunity of a lifetime for her," Porsche Taylor told Variety. "She was over the moon."

Jason Cameron, a business agent for the Union of B.C. Performers/ACTRA, which represents B.C. stunt performers, said in a statement Friday that the initial report should be a first step in a full investigation. "Our hope is that the outcome of that investigation will provide our industry with the information we need to ensure something like this doesn't happen again."

Filming resumed two days after Ms. Harris's death. Video footage obtained and posted by the Hollywood website TMZ showed Mr. Reynolds leading the crew in a moment of silence. He earlier issued a statement in which he said the crew "recognize nothing can come close to the grief and inexplicable pain her family and loved ones must feel at this moment."

A WorkSafeBC spokesperson said that after workplace accidents, work can often resume in areas of the business unrelated to the incident or incident location. "The movie production team has made it clear that they have no intention of resuming production of any motorcycle scenes," Trish Knight Chernecki said in a statement.

On Thursday, Deadpool 2 star Zazie Beetz, whom Ms. Harris was doubling for, said in a statement that her "heart has been breaking" over Ms. Harris's death.

Deadpool 2, which is being directed by former stuntman and stunt co-ordinator David Leitch, is set for release next June.

Filming of Deadpool 2 in Vancouver presses on after death of stunt driver
August 16, 2017 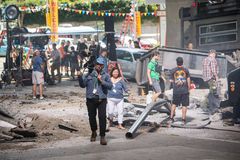 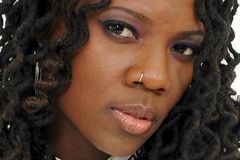 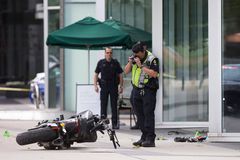