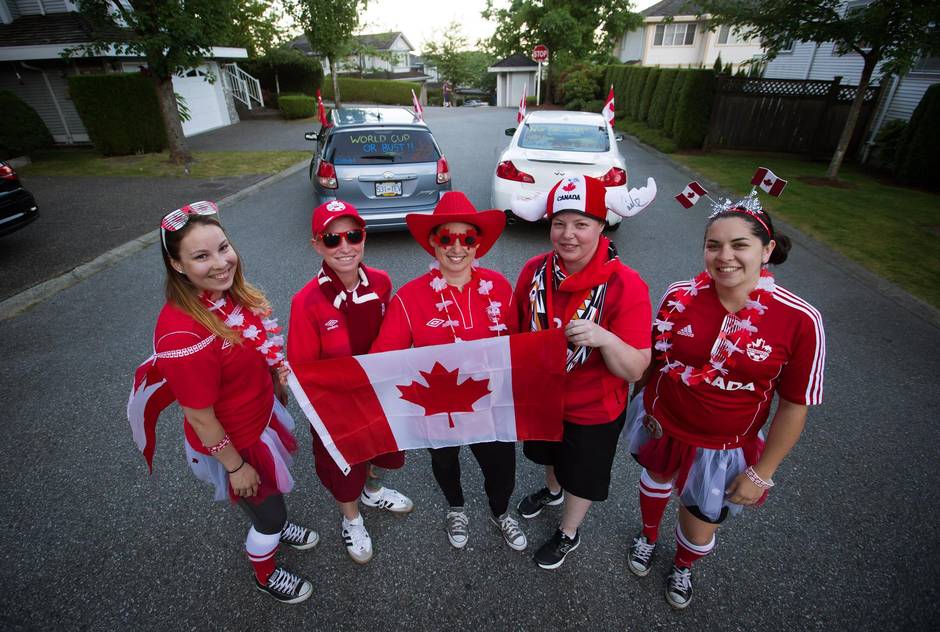 From left to right, soccer players and fans, Nicole Martin, Samantha Christian, Sandra Uno, Melissa Bostrom and Tasha Bradley pose for a photograph in Coquitlam, B.C., on Thursday June 4, 2015, before departing on a road trip to Edmonton for Canada's opening match at the FIFA Women's World Cup. (Darryl Dyck/For The Globe and Mail)


The FIFA Women's World Cup opens in Edmonton and ends in Vancouver, and both cities are gearing up for a world-class party. Kat Sieniuc reports


When Samantha Christian moved to Canada from England as a teenager three decades ago, she did something she couldn’t do back in her home country: She joined a girls’ soccer team.

Despite the U.K.’s fixation on professional soccer, there were no opportunities where she lived for girls to play the sport in an organized setting like boys her age.

“I got to play in the back streets,” Ms. Christian says. “I came [to Canada] and girls could play here. There were no professionals, but I went straight to a community team.”

More than 30 years later, Ms. Christian will be joining soccer fans from across the country in welcoming the sport’s premier event, the FIFA Women’s World Cup, to six Canadian cities for the next month. Ms. Christian and her friends have made the 12-hour drive to Edmonton to watch the first match on Saturday. She also has tickets to all the matches held in Vancouver and another in Edmonton, which will see her travel between Vancouver and the Alberta capital twice in the span of a week.

“To see women especially playing at such a high level now, it’s just like a dream come true,” she says.

And the sport will now be front and centre in host cities, including Edmonton, where the tournament begins, and Vancouver, which will host the sold-out final on July 5 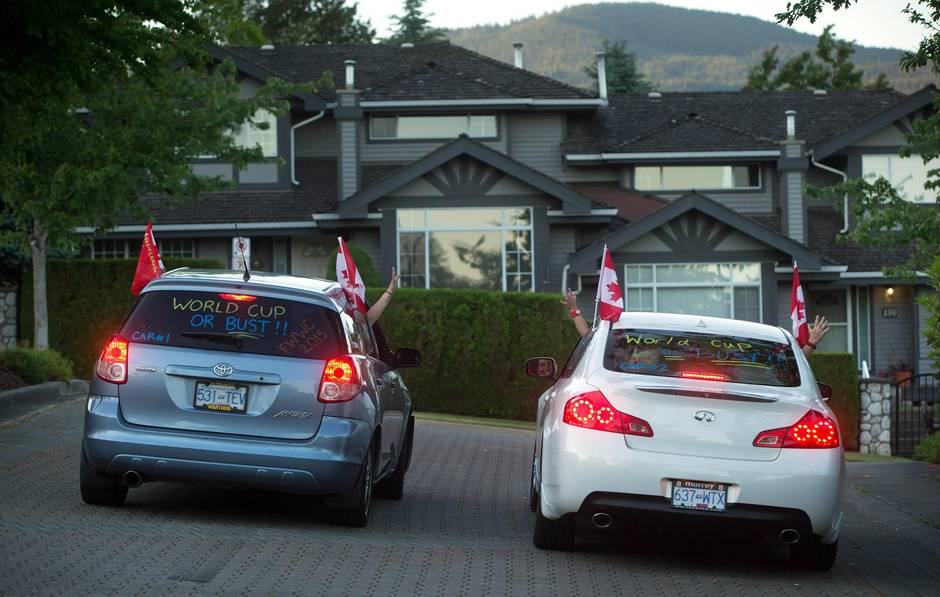 
Rob Notenboom plans to be among the loudest and most co-ordinated group of fans cheering on Canada during the opening match at Edmonton’s Commonwealth Stadium.

Mr. Notenboom, who travelled to Edmonton from his home in Regina, will be in the stands with fellow members of the Voyageurs, the country’s national soccer supporters. They plan to be standing during the match, singing chants and songs.

“Some of [the songs] are references to Canada’s soccer history, some of them are just stolen from English teams – there are all sorts of goofiness that we get into there,” he says.

Mr. Notenboom says he knows of at about 50 people from Regina – Voyageurs and local soccer players – who have also made the trek to Edmonton.

“It’s massive. I don’t think it can be understated – it’s the biggest single sport tournament for women’s sports in the entire world.”

Despite the expected mania for Canada’s opening match, Mr. Notenboom admits there would be far greater hype around the tournament if it was a men’s event.

“However, amongst the people that are really up for this, there’s a lot of people who are getting to the point where they’re pretty sure they’re not going to sleep tonight,” he says. “People are pretty pumped and excited and getting that nervous anticipation phase.”

At BC Place stadium, Paul Sabourin-Hertzog of the Southsiders – a group for Vancouver Whitecaps fans – says there should be many recognizable local soccer fans in the stadiums, as well.

“But we’ll be dressed in red instead of blue and white,” he says.

For Mr. Sabourin-Hertzog, the fact that the tournament is playing out on home soil is a big deal.

“Especially at a time when women’s athletics is starting to get more funding, more sponsorship, more media attention, it’s definitely a cool thing to be a part of and we hope that it will continue with Canada being a global presence in soccer,” he says.

Michael Jackson, the manager of the Granville Sports Corner in downtown Vancouver, says he’s put in a second order to fly in more team Canada merchandise – his wall of official jerseys, scarves, flags, hats and game balls is running low.

“It is really starting to heat up now,” he says. “I’ve got the hotels phoning, the beer reps are coming in.”

Vancouver is setting up an Olympics-style Fan Zone at Dunsmuir and Cambie. It’s expected to draw up to 5,000 daily visitors, who can take part in a beer garden, mini soccer pitches and other kids’ activities, and local music acts, including Mazacote, SideOne and Iskwé.

The official Fan Zone in Edmonton is active on match days at the Commonwealth Stadium, equipped with a photo booth. The unofficial fan area is downtown in Centennial Plaza. 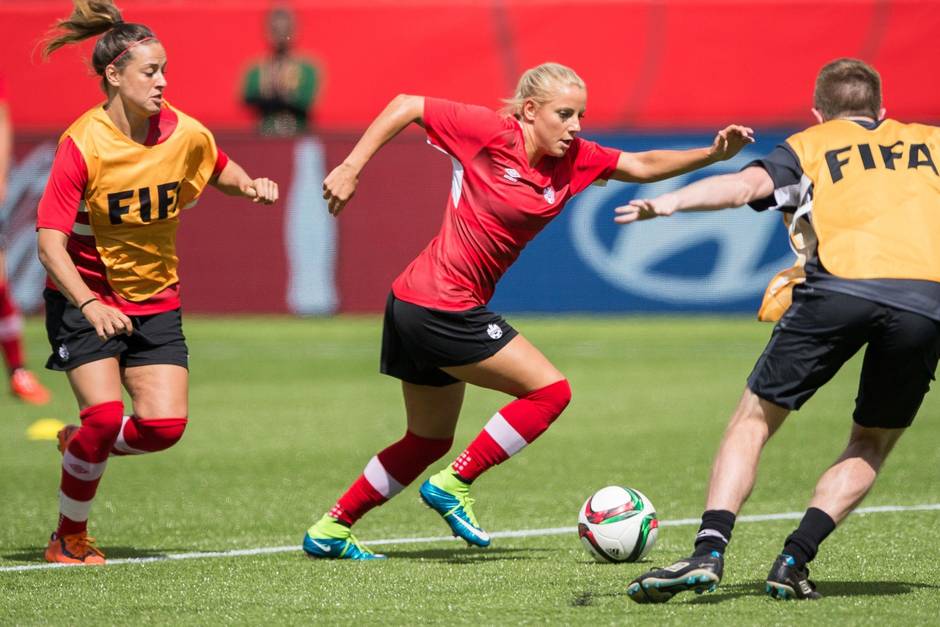 
Soccer Canada says it has sold more than 920,000 tickets across the six host cities, although more detailed numbers for individual games and venues are difficult to come by.

As of last Wednesday, organizers had sold more than 42,000 tickets for Saturday’s opening in Edmonton’s Commonwealth Stadium, putting it on track to set an attendance record for a women’s A-level international game on Canadian soil (the current record is from 2003 at 29,953 tickets, also set in Edmonton). But that still leaves the event far from sold out in a stadium with a capacity of more than 50,000 spectators.

The July 5 final in Vancouver’s BC Place stadium, which can also seat about 50,000, is already sold out, with the highest-price tickets selling for $165. However, tickets for earlier games in both cities are still easy to find.

Compared with the men’s World Cup, tickets to the women’s events are a bargain. For example, tickets for Saturday’s Canada-China match cost anywhere from $50 to $115 – and some can be found for as low as $15 – which is at least 10 times lower than prices for the men’s tournament, said Mario Livich, chief executive officer of Showtime Tickets, an online ticket reseller.

But Mr. Livich predicted the reasonable prices may also help to sell out some of the earlier games.

“People will realize tickets are available, affordable, and people will jump on board,” Mr. Livich said. “Canadians are really good at supporting events in their backyards.”

Constable Brian Montague of the Vancouver Police Department warned spectators to be cautious of fraudulent tickets – a major problem for all concerts and sporting events in the city.

“Unfortunately, a lot of times we don’t know about fraudulent tickets until someone goes to an event and tries to get in,” he said.

It’s a tough problem to combat. Const. Montague said the only way to guarantee a real ticket is to avoid purchasing off of classifieds sites like Kijiji and Craigslist and stick to a legitimate ticket retailer – in this case, Ticketmaster. 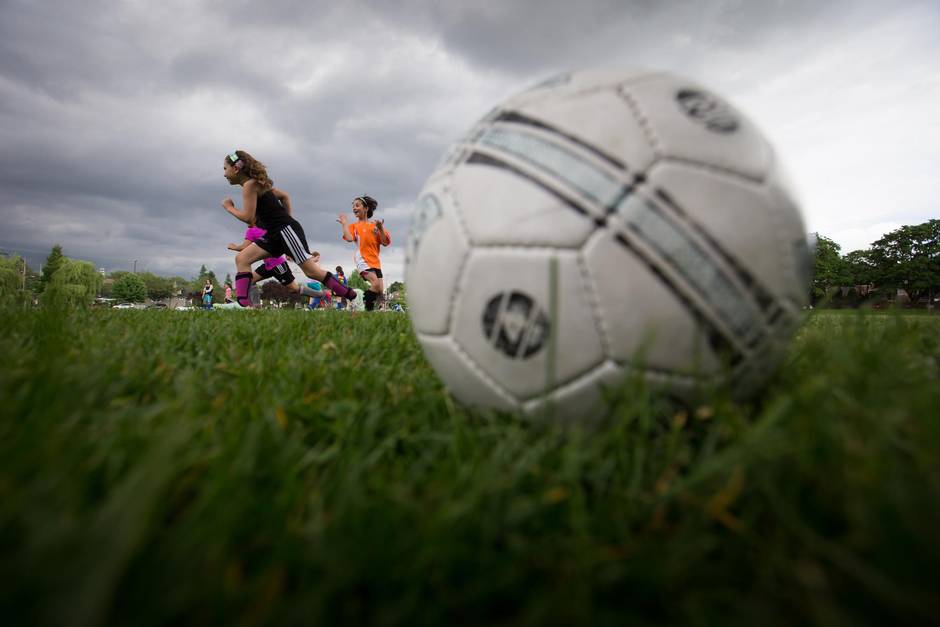 Vancouver Athletic FC minor soccer players participate in team practice in Vancouver, B.C., on Wednesday June 3, 2015. Their soccer club has been selected to participate in the FIFA Youth Programme at the Women's World Cup. The program allows youth players aged six to 17-years-old to participate in the competition either as a member of the player escort team, ball crew or as a flag bearer depending on their age. (Darryl Dyck/For The Globe and Mail)


FIFA fans in Vancouver are in for a throwback: Players from the first Women’s World Cup national team in 1995 will be honoured on June 8 in the Fan Zone. Mayor Gregor Robertson will also be in attendance.

Grouse Mountain will be showing games on their TVs in Altitude’s Bistro.

A number of bars and restaurants will also be televising the live matches, including: Backstage Lounge on Granville Island, P2B Lounge, Chewies, Spencer’s Lounge, Comox Long Bar and Grill – not to mention the 20-foot screen at Steel Toad Brewery and the nine TVs at The Fish Shack. The Fan Zone at Larwill Park is free to the public on all days BC Place is hosting a game or Canada is playing one.

Local attractions are also offering discounts. For example, both the Canadian Outback Rafting and Harbour Cruises are offering 15 per cent off tours to anyone with a valid ticket stub for a game.


June is soccer month in Edmonton. The new mayoral proclamation is part of efforts to create World Cup buzz in the city, where the tournament opens with the Canada-China match on Saturday.

To celebrate, fans of the Canadian Women’s National Team – led by Olympic medalist and Senator Nancy Green-Raine – will be marching to Commonwealth Stadium before the opening ceremonies.

Other tournament-related events held by the city include eight viewing parties at Centennial Plaza for away matches. The city will also be decorated with banners, window displays and interactive cut-outs in municipal buildings, recreation centres and libraries, as well as the airport and local businesses.

City Hall and Muttart Conservatory pyramids will be lit red for the entire tournament, and the High Level Bridge will be red on the eight nights matches are being held in Edmonton. 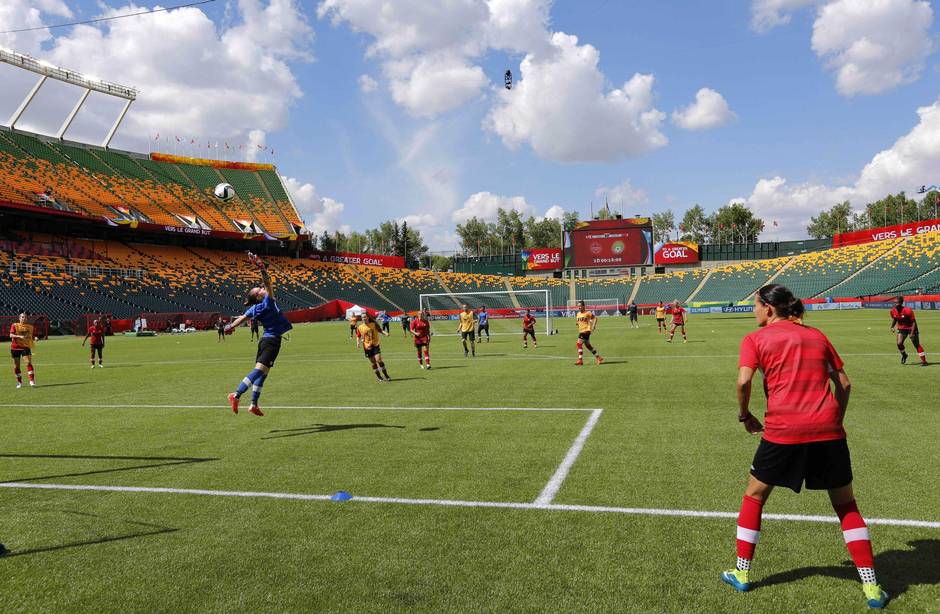 Canada goalkeeper Erin McLeod blocks a shot during team practice on the day before the first game of the FIFA women's soccer World Cup games at Commonwealth Stadium between Canada and China. (Erich Schlegel/USA TODAY Sports)


Vancouver is expecting the tournament to shine an Olympic-sized spotlight on the city.

“The global coverage of this event is actually greater than the Olympics, because soccer is the highest, most participated in sport in the world,” says city manager Penny Ballem. “We expect millions of viewers internationally and ... I think they’re going to see us again as a sports destination.

Indeed, global eyeballs are what cities are banking on to lure in international sales missions and business.

“We’re very fortunate we’ve got the closing game, which means that in the last week of this tournament there’ll be a lot of focus on Vancouver,” Ms. Ballem says.

Vancouver is expecting an estimated $36.7-million impact on the local economy as a consequence of hosting nine matches, including the final. For comparison, the final economic impact from last year’s Grey Cup was $125-million.

The City of Edmonton projects the impact to the visitor economy from the World Cup to be $48.5-million.

Renee Williams of Tourism Edmonton says the city has come to life as it embraces the tournament, which she says is important for attracting future international events.

“Major event organizers are looking to Edmonton right now as a host city, and they’re seeing some of the community involvement,” she said. 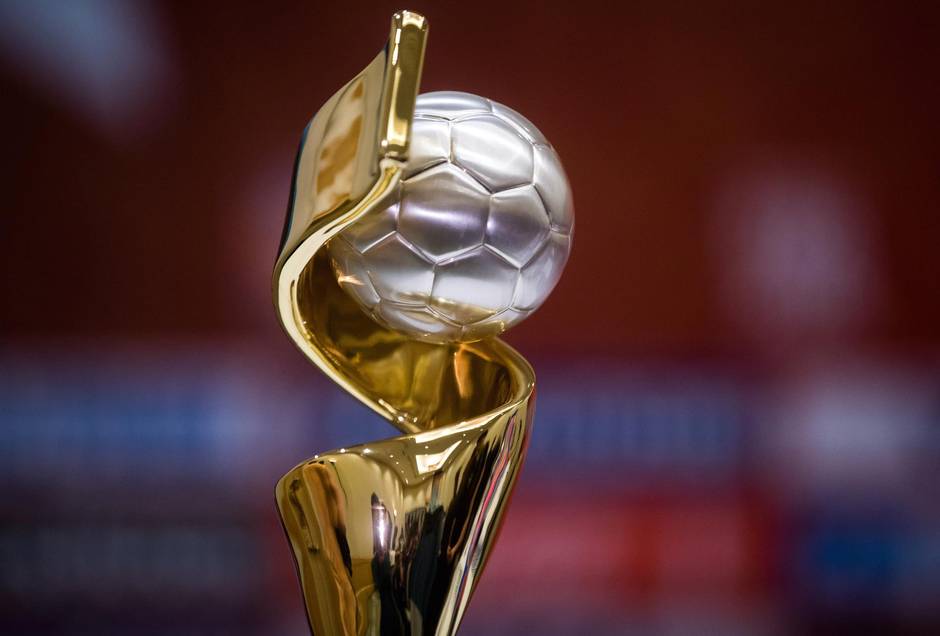 
The World Cup winner must win four playoff games in order to take the championship.

Each of the 24 teams start by playing three matches in the round robin. The top two teams from each group, as well as four third-place teams, advance to the first playoff round, called the Round of 16.

The first team in group A plays against the third-place team in either group C, D, or E.

The winners of the Round of 16 matches advance to the elimination rounds: the quarter finals, the semi-finals, and the finals.

The two teams that lose in the semi-finals play each other for third place.

The odds of Team Canada winning the World Cup on home soil are better than 9 to 1, according to PlayNow.com, an online gambling website run by the B.C. Lottery Corp. If Canada wins, a $10 bet could be worth $95.

The lottery corporation has Team USA and Team Germany slated as the current favourites to win the tournament, each tied at just better than 3 to 1 odds.