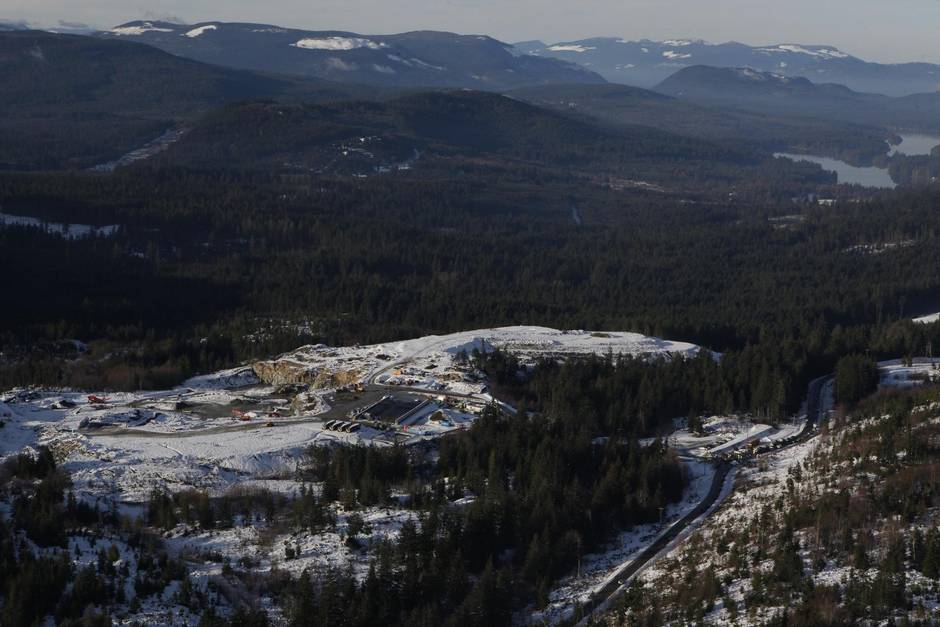 An aerial view of the South Island Aggregates site where tonnes of contaminated soil is dumped every day near a sensitive watershed. In the distance is Shawnigan Lake. (Photos by Chad Hipolito for The Globe and Mail)

Since last May, trucks have been rolling into a site near Shawnigan Lake to unload cargo: soil dredged from a Port Moody property in the Lower Mainland.

Under provincial regulations, the soil isn’t hazardous; if it were, it would have to be disposed of in a provincially approved hazardous waste facility. But it is “contaminated,” meaning the amount of, say, salt, lead or mercury it contains exceeds numerical standards set out in B.C. legislation.

That distinction between hazardous and contaminated means little to Shawnigan Residents Association members and others fighting a pitched battle against the facility, which is located next to a rock quarry about five kilometres south of, and upslope from, Shawnigan Lake.

“It isn’t complicated,” Sonia Furstenau, a Cowichan Valley Regional District director, said in Victoria on Thursday, during a break from court proceedings. “They are putting a contaminated waste dump above a lake that provides drinking water for thousands of people, and that’s a huge, huge problem.” 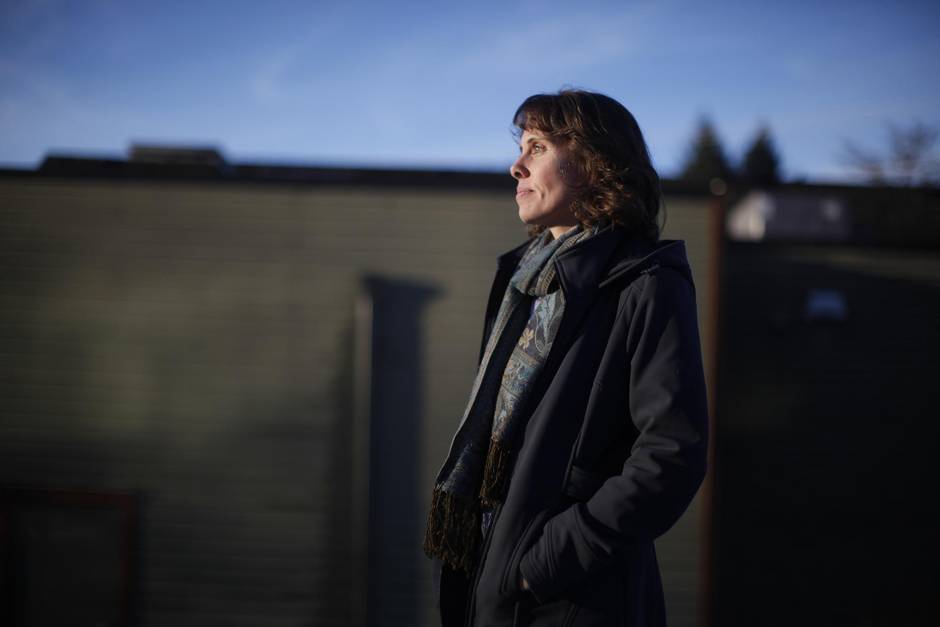 Since the province granted a permit to the facility in 2013, it has been subject to legal challenges, protests and, most recently, a judicial review triggered when opponents objected to a 2015 Environmental Appeal Board decision that upheld the permit. Those proceedings took another turn this week, when the Malahat Nation – whose reserve is located close to the site – filed a court application to support the granting of a stay of the permit.

The Malahat said evidence presented to date in the judicial review left them concerned that “proper, independent science” may not have been considered in the decision by the ministry or the board.

The City of Victoria has also weighed in, passing a motion this month in support of revoking the permit for the facility, which has a permit to receive up to 100,000 tonnes of contaminated soil per year.

The controversy has been a headache for B.C. Environment Minister Mary Polak, who has been the target of social-media postings calling on her to “pull the permit” and “Save Shawnigan Water.” In an interview with The Globe and Mail earlier this month, NDP Leader John Horgan said the province should cancel the permit – even if that means having to pay compensation to the owners.

The controversy around the facility has focused largely on the potential for contaminants to make their way into Shawnigan Lake, which provides drinking water to thousands of people in the watershed. Proponents say the site’s design will prevent that from happening. In a presentation to Port Moody council this month, Todd Mizuik – a spokesman for South Island Resource Management, or SIRM, which operates the facility – maintained it is not contaminating Shawnigan Lake, and he drank water he said came from the site. 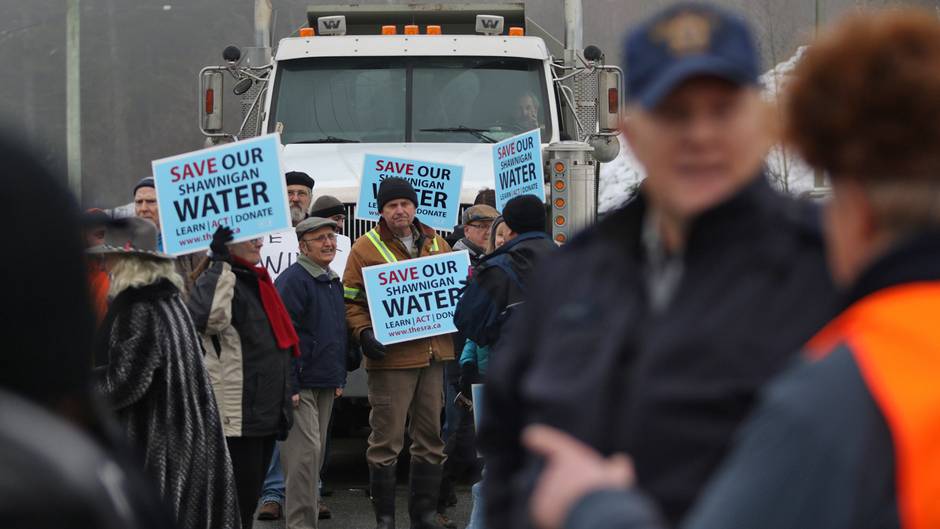 A truck is blocked from entering as citizens of Shawnigan Lake and Save Shawnigan Water Community Action Group supporters protest.

But opponents have also cried foul on how the operation came together, zeroing in on an alleged profit-sharing deal between engineering firm Active Earth – hired to do technical work on the site before it was granted a permit – and the facility’s owner.

Details of that deal came to light through documents anonymously delivered to the Shawnigan Residents Association. In response, Cobble Hill Holdings – which owns the site where the contaminated soil facility is located – has said the deal was never acted on.

In a Jan. 20 affidavit, Malahat Chief Caroline Harry said details that have come up in the judicial review about that alleged agreement are cause for concern.

“I believe that if the allegations regarding Active Earth’s independence had arisen earlier in this process, Malahat would have required greater consultation from the Crown in regard to the project and would have requested that the Ministry of Environment conduct independent scientific testing and assessment of the Project, or require that such independent study be undertaken,” she said in her affidavit. 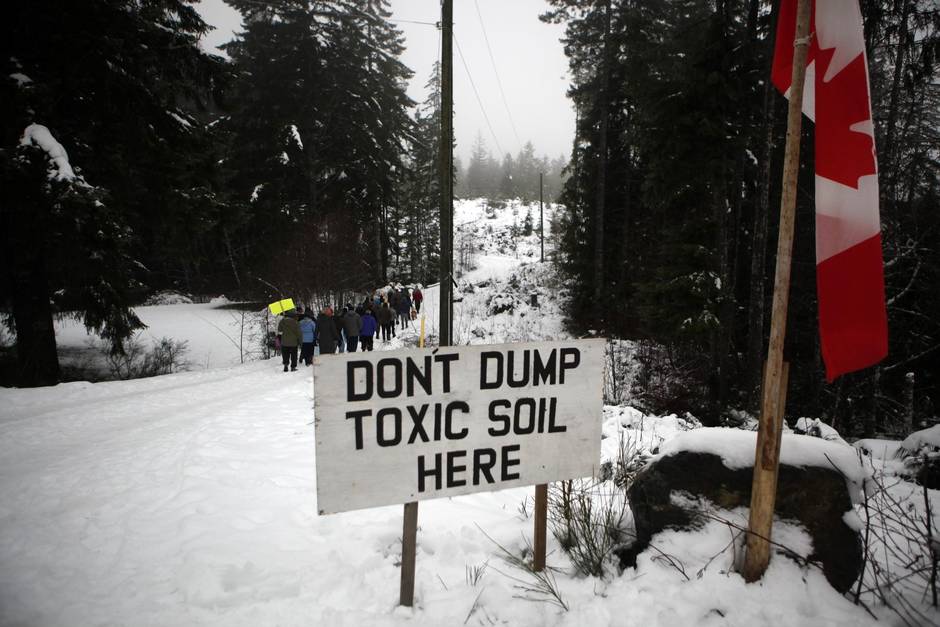 Citizens of Shawnigan Lake with Vancouver Island residents take a guided tour to the contaminated site.

Ms. Harry was elected last November, after former chief Michael Harry resigned after reports of payments being made to him and other Malahat members by proponents of the contaminated soil project.

To date, the facility’s main customer has been Port Moody-based Pacific Coast Terminals. About 31,000 tonnes of soil have been moved to the Vancouver Island site so far, and the company has another 50,000 tonnes that could be moved in the future, Pacific Coast vice-president Wade Leslie said in an e-mail.

“All of the soil comes from our site,” Mr. Leslie said. “It is being removed to build foundations for business expansion activities. … It was originally dredged fill, as our site was created from reclaimed dredged material in the 1950s and 1960s.”

Pacific Coast chose the disposal site through an internal procurement process and a legal review of all options available at the time, he said.

“We place reliance on the [Ministry of Environment] and SIA regular testing by qualified professionals,” he added. “No issues or concerns have arisen from their testing at the SIA site, to our knowledge. This is clearly an emotional issue for many people, however we have faith that the authorities and courts have and will continue to follow due process and arrive at the appropriate conclusions.”

Several people who attended court hearings in Victoria said they lived near or frequently visited Shawnigan Lake, and were concerned about contaminants leaching into streams and the lake – even if that didn’t happen for decades. One of those was Ronaele Hahn, who said her family has had property at Shawnigan Lake since the early 1900s, and that the lake provides recreation, drinking water and other benefits that should not be put at risk.

“I have a vested interest in this – in having clean water that is safe for my grandkids and for theirs after that,” Ms. Hahn said during a break in court proceedings. “The potential for disaster is huge in our minds.”

Editor's note: An earlier digital version of this story incorrectly spelled Sonia Furstenau's surname. This version has been corrected.