For triathlon champion Les McDonald, who lobbied intensely for more than a decade to get the sport into the Olympics, Labour Day weekend had a special significance. While the holiday had its usual appeal for the staunch union man, it also coincided with his greatest victory in a lifetime of sporting conquests. On Sept. 4, 1994, Mr. McDonald received a telephone call from International Olympic Committee chairman Juan Antonio Samaranch, who informed him that triathlon would be included in the 2000 Games in Sydney, Australia.

Mr. McDonald, nicknamed the Red Baron for both his ruddy complexion and his left-wing politics, died in Vancouver on Sept. 4, 23 years after the day of that phone call. He was 84 and had battled Alzheimer's disease for several years.

Mr. McDonald was born in Newcastle, England, on April 30, 1933, and raised in the nearby coal-mining village of Felling. While his father was away fighting in the Second World War, young Les and his siblings were raised by his mother, aunt and grandmother. He would never forget the formative role that these women played in his life.

Les learned to rock climb from a returning soldier who was employed as a school teacher after the war. When Mr. McDonald did his mandatory two-year stint of National Military Service in the British Army in 1953 and 1954, he was sent to Cologne, West Germany, and went rock climbing and skiing in the Alps on weekend furloughs. One one of these furloughs he met Monique Richer, a student, whom he would eventually marry.

Once settled in Vancouver, Mr. McDonald pursued his twin passions for rock climbing and ski racing. He is credited with 13 first ascents of unclimbed mountains in B.C. and Washington State and the first ascent of Good Neighbour Peak on the Yukon-Alaska border in 1967.

With his family settled in North Vancouver, he apprenticed as an electrician and went wherever the work was – Squamish, Port Mellon, Castlegar, Powell River – and witnessed first-hand the gritty battles between unions and B.C.'s industrial giants of the day. In several instances, he rallied fellow workers at job sites to protest conditions and led wildcat strikes, which often resulted in mayhem and picket-line confrontations. He joined the Communist Party in 1958 at the behest of a fellow electrician, Jack Gillett, believing, according to Mr. McDonald's son Ian, that "These were active, committed and interesting people."

During the Lenkurt Electric wildcat strike in the spring of 1966, Mr. McDonald led a week-long occupation of the Vancouver labour hall belonging to Local 213 of the International Brotherhood of Electrical Workers, to protest the union's control over its rank and file. This ultimately unsuccessful action resulted in a 30-year suspension (later reduced to 15) from the union, and forced him temporarily out of a job. (He later found work again as an inside wireman before retiring at the age of 60.)

Ian McDonald says the Lenkurt strike was a pivotal moment in his father's life, when he turned away from union politics and toward organized sport. "There is is no question that his enormous energy, organizational skills and his ability to read and motivate people were instrumental to the inclusion of triathlon on the Olympic program in Sydney, Australia."

The next chapter of Mr. McDonald's life would revolve around Whistler and the Alta Lake Sports Club. Mr. McDonald had purchased a piece of property in 1968, on newly founded Whistler Mountain, where he promptly built a cabin. Every weekend, a gaggle of men, women, children and dogs would endure the white-knuckle three-hour drive to Whistler and ski down the brand-new mountain.

A number of years later, his friend Al Fisher convinced Mr. McDonald to switch over to cross-country skiing, and with school teacher Loreen Barnett, they formed the Alta Lake Sports Club. There followed organized work parties cutting trails around Lost Lake. Today, Mr. McDonald is immortalized on a challenging spot above the lake known as "Les's Leap."

Mr. McDonald was an outstanding amateur athlete in several sports and always keen to try something new. The first Ironman triathlon was organized in 1978 in Kona, Hawaii, and was a gruelling endurance test – 2.4 miles of rough, open-ocean swimming followed by a 112-mile bicycle ride and a 26.22-mile marathon. McDonald was instantly hooked, winning his age group (50-55) at Ironman Hawaii for five straight years starting in 1983.

Of course, such a lengthy race was impractical to hold every weekend, so shorter events were created. Taking his cue from American race organizers Jim Curl and Carl Thomas, Mr. McDonald rallied support around a standardized course based on three Olympic endurance disciplines; 1,500-metre freestyle in the pool, 40-kilometre cycling time trial, and 10-kilometre track and field race.

Mr. McDonald first heard from Mr. Samaranch in 1983. The IOC boss had seen a pro triathlon on television and thought that the nascent sport might make a good fit for the Summer Olympics, which he wanted to modernize by adding more entertaining, viewer-friendly sports.

Mr. Samaranch had a simple request for Mr. McDonald: "Help me get triathlon into the Summer Games." Mr. McDonald believed that inclusion in the Olympics would sustain the sport and spread it to new countries, so he immediately agreed. Canadian IOC delegate Richard Pound was an early ally.

Initially, Mr. Samaranch instructed Mr. McDonald to integrate triathlon into the Modern Pentathlon sports federation, which was controlled by the Russians. But after the Russian chairperson tore up Mr. McDonald's proposed constitution in his face, Mr. McDonald stormed out and immediately called Mr. Samaranch. More fractious meetings followed.

Mr. McDonald set up the sport's own governing body, the International Triathlon Union, in the spring of 1989. The ITU would be based in North Vancouver with McDonald as president and Ms. Barnett as its office manager.

Mr. McDonald's next major tasks were establishing a qualifying circuit, and co-ordinating national organizing committees in dozens of countries in order to win valuable IOC votes. He also organized a series of qualifying races known as the ITU World Cup.

Along the way, Mr. Samaranch connected Mr. McDonald with Swedish IOC official Gunnar Ericsson to help him navigate the byzantine politics of Olympic sport. Mr. Ericsson became a valuable mentor and father figure. At one important schmooze, Mr. Ericsson passed Mr. McDonald his accreditation through a bathroom window and, using rock climbing skills he'd honed in his 20s, Mr. McDonald scaled the building and popped into the party via an outdoor deck.

The first person he met was Princess Anne, whom he had met previously. She looked at Mr. McDonald's borrowed credentials and confusedly said, "Why Gunnar, how you've changed!"

Mr. McDonald took a meticulous approach to lobbying the IOC committee members, constantly making notes and drawing on his encyclopedic knowledge of world history to woo delegates. "Les was always on his best behaviour when he was mingling with the IOC," Ms. Barnett says. In his trademark blue blazer and with a hint of a Geordie accent, "He could talk as equals with Princess Anne of Great Britain and Prince Rainier of Monaco."

An important part of Mr. McDonald's legacy is that he made a point of promoting gender equality in triathlon, Ms. Barnett says. "It was incredible how Les never wavered from making the athletes the centre of the events. Women would receive not just equal prize money but equal television and interview time with the media."

Mr. Samaranch and the IOC rolled the dice when they decided that women's triathlon would be the very first televised event at the 2000 Sydney Summer Olympics, utilizing a circuit-style race course with spectators cheering as triathletes finished each lap. Ms. Barnett recalls, "NBC Sports broadcaster Dick Ebersol told me that these female triathletes diving into the water was the perfect image for the start of the new millennium." The men's race on the following day was won in dramatic fashion by Canadian Simon Whitfield. Triathlon has figured prominently in the past five Olympic Games.

After Sydney, Mr. McDonald was touted as a possible IOC delegate, but Ms. Barnett says, "Les just said no. He was always looking for the next battle. He wasn't interested in celebrating success." After passing the torch to new ITU president, Spain's Marisol Casado in 2008, he received a slew of honorary titles and awards, including induction into the Order of Canada in 2013. 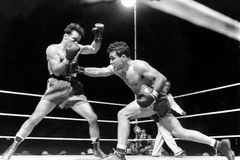 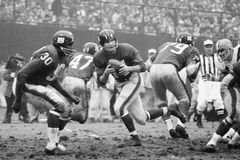