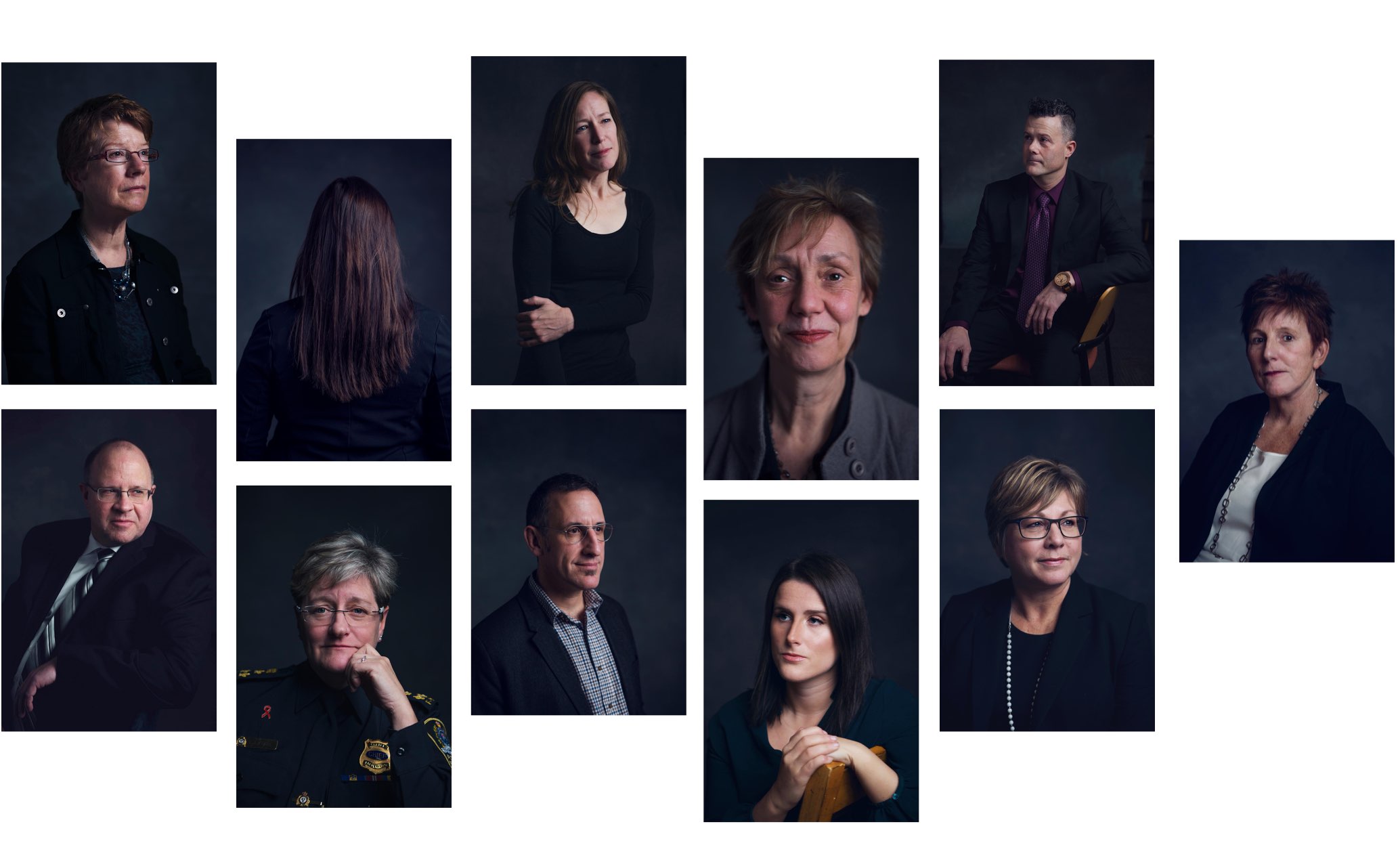 On the front lines of unfounded

The trauma expert leading specialized sexual-assault training. The advocate pushing groundbreaking police oversight. The government lawyer who made that change possible, and the senior police officers who embraced it.

These are among the people who have been on the front lines of the sexual-assault policing reforms happening across the country in response to The Globe and Mail’s Unfounded investigation, which in February revealed that Canadian law enforcement has been dismissing sexual-assault allegations at a rate much higher than for other crimes. Through hundreds of Freedom of Information requests, it was determined that police were closing one out of every five sexual-assault files as “unfounded,” a term that means the investigating officer does not believe a crime occurred – nearly double the rate for physical assault.

On Saturday, The Globe reported that, since the series launched, at least 100 Canadian police services have reviewed closed sexual-assault files. In total, 37,272 cases are being reviewed – about half of which had been dropped as unfounded. Police say 32 per cent of the unfounded files reviewed so far had been misclassified, a Globe and Mail survey of Canada’s 177 police services determined.

That same survey revealed that police services in more than half of the country are planning – or have already implemented – new, specialized training for investigating sexual-assault cases, which details how trauma can alter brain functioning and affect victims’ behaviour during an attack and their ability to recount it later. Further, the survey showed that 51 per cent of Canada is being policed by a service that is doing – or considering – some form of case review inspired by the Philadelphia Model, under which police provide sexual-assault files annually to advocates who work in the area of violence against women (VAW) for review.

Making these changes happen is a vast network of people, many of whom have been pushing for these reforms for a long time.

Understandably, a lot of police services have been uncomfortable or had questions about advocate case review, because it’s not something we’ve ever done in Canada before. … Some police services, obviously, still have questions or wonder whether it’s useful to them or not. I would just say that I haven’t worked with a community yet where the police haven’t said that they found it extremely useful and are looking forward to continuing.

Sunny Marriner has been campaigning to bring the Philadelphia Model to Canada for years, and in May of 2015, she spoke about its virtues before the Ontario government’s Select Committee on Sexual Violence and Harassment. The committee later recommended that the province consider implementing a similar oversight mechanism. Ms. Marriner is now leading VAW case-review training around the country, and a three-year pilot project funded by Status of Women Canada that has seven police services adopting the model.

For quite some time, the Kingston police department has been looking at how to handle sexual violence better, Deputy Chief Antje McNeely said. So last year, when the Ontario government offered grant money to help police forces with that very issue, Kingston applied. The service received $108,381 to host a conference on the neurobiology of trauma, fund better community outreach, and convert its interview rooms into “soft spaces” with couches, pillows and light blue walls so victims would feel more comfortable and less like they were being interrogated. Deputy Chief McNeely said the Philadelphia Model seemed like a natural extension of what the force was doing. The Kingston force is part of the Philadelphia Model pilot project, and its VAW review committee met for the first time in November, 2017.

Lawyer with the Office of the Ontario Information and Privacy Commissioner

We knew quickly that we could provide concrete guidance on the privacy issues that might otherwise have been misunderstood as an insurmountable barrier to going ahead.

The first push to bring the Philadelphia Model to Canada began in Ottawa about four years ago through the lobbying efforts of a coalition of local advocacy groups. In February of 2015, the Ottawa police asked the office of Ontario’s Information and Privacy Commissioner (IPC) for guidance on privacy concerns related to giving civilians access to police files. The talks fizzled about a year later, but after the Unfounded series, the IPC asked if the Ottawa force was interested in resurrecting that work. It was. Police in Kingston contacted the IPC for the same reason.

Working with the Kingston service and Ms. Marriner, IPC lawyer Stephen McCammon developed a legal roadmap for VAW case review that navigates Ontario’s privacy legislation. This framework is being widely shared with other Ontario police services, and can serve as a jumping-off point in other provinces.

A woman whose “unfounded” rape allegation was reopened, leading to an arrest

There is a sense of relief, but at the same time, there hasn’t been the type of accountability brought down that I really expected to have happened. … The individual who has been charged was phoned and asked to come in [to the police department] and sign papers and then walked away. So this person did not even so much as hear the click of a handcuff on his wrist.

When she was a youth, this Indigenous woman told a municipal police service she had been raped. After a minimal investigation, the case was closed as unfounded. After The Globe’s series, it was reopened, and Ottawa resident Brian Lance, 46, was charged with sexual interference, invitation to sexual touching and sexual exploitation of a young person. This is one of several files The Globe is aware of in which a criminal charge has been laid after police returned to closed cases after our investigation.

The woman cannot be named because of a publication ban.

I’ve been actively involved in violence against women issues for most of my career and I’ve had a long-standing working history with the Fredericton Sexual Assault Crisis Centre. When I saw the Unfounded story, they were one of my first phone calls to talk about how to move forward … [VAW case review] seemed like the right thing to do.

The Globe’s Unfounded series revealed New Brunswick had the highest unfounded rate of any province, with 32 per cent of sexual-assault allegations ending up in that category. In response, the province and the New Brunswick Police Commission, an independent oversight body, urged police services to review cases. Perhaps no service east of Ontario has taken up the calls for reform more enthusiastically than the Fredericton Police Force (although its unfounded rate was only 16 per cent). Chief Leanne Fitch has spoken in favour of collaboration with community partners, a trauma-informed approach to investigations and, most recently, her department has committed to implementing VAW case review based on the Philadelphia Model. It appears to be the only police service in the Maritimes taking that step. Chief Fitch said it is still working through some of the privacy issues – the legislation varies from province to province – but the hope is to be up and running by next year.

Professor of criminology at University of Ottawa

I think people are finally taking notice after researchers and advocates have been yammering away on this for a long time. … People are asking is this a turning point? It may be.

In addition to being a vocal proponent of the Philadelphia Model and an academic authority on the unfounded issue, criminologist Holly Johnson has done some of the most extensive research in the country into how sexual violence cases move – or don’t move – through the criminal-justice system.

A law professor at the University of Ottawa

What we need to see is a change in charging. So until we see that, we can’t claim this is a success. … [The Philadelphia] Model should deliver a higher charge rate, not just reclassification, and it also should deliver better investigations, more thorough investigations.

When the Ottawa Police Service was debating the merits of VAW case review, law professor Elizabeth Sheehy co-wrote an op-ed in the Ottawa Citizen with former attorney-general of Canada Allan Rock praising the model. She is an expert in sexual-assault law, and edited the 2012 book Sexual Assault in Canada: Law, Legal Practice and Women’s Activism, which included a reference to the original study of unfounded rates that inspired the Globe series.

I don’t know that I’m 100-per-cent convinced yet that all of the police services that say they’re serious [about reform] are sincere about it.

It was a small study of unfounded rates by lawyer Blair Crew with researcher Teresa DuBois that was referenced in Ms. Sheehy’s book. Through Freedom of Information requests, the pair obtained unfounded statistics from seven Ontario police services from 2003 to 2007. The results showed a dramatic disparity in the rate at which police were using the unfounded classification. For example, the Windsor Police Service dismissed one of every 50 sexual-assault allegations as unfounded. In London, Ont., police dropped one in three cases this way. Mr. Crew has since emerged as a leading expert on the unfounded issue, and regularly counsels sexual-assault victims on how to navigate the legal system.

I really believe it’s the era of the advocate groups coming forward and working with the police and actually helping us to provide better service to the community as a whole.

Despite having an unfounded rate of just 10 per cent, the Calgary Police Service in May became the first major force to commit publicly to ongoing case reviews by front-line advocates. The department followed Ontario’s North Bay police force, the earliest vocal supporter of the model. Staff-Sgt. Walker said that even though the Globe investigation found the service to be doing well, “we can always do better.” Calgary is part of the seven-service pilot project for VAW review that Status of Women Canada is funding.

25-year-old law student, who has filed a civil case against the London Police Services Board and the detective who dismissed her rape allegation as unfounded

Having people message me and say, ‘Something like that happened to me’ – that really made me mad and it felt like I had enough support behind me and I was strong enough that I would go public.

Identified only as “Ava,” Ms. Williams was featured in the first Unfounded story. In 2010, when she was 18, she told the London Police Service she was raped at a keg party while severely intoxicated. The detective who interviewed Ms. Williams suggested the incident was consensual. He falsely told her it was not possible to remember some parts of the night but not others. Her case was dismissed as unfounded. Ms. Williams’ lawsuit alleges gender discrimination against the board and the detective. The litigation has the potential to balance liability concerns around negligent police investigations, lawyer Blair Crew says. Law enforcement can be held liable for wrongfully charging someone. If Ms. Williams’ action is successful, police might be held liable for “wrongfully unfounding” an allegation. Additionally, Ms. Williams’ police interview is being used in police training as the textbook example of how not to conduct a sexual-assault investigation.

A big training I just did recently … I showed the Ava interview and the RCMP detective said: That’s not how we should be interviewing victims. That’s how we interrogate criminals.

Lori Haskell is Canada’s pre-eminent expert on the neurobiology of trauma, specifically as it relates to sexual violence. In the past year, she has held 20 training sessions with police services about the trauma-informed approach to investigations, and already has another 20 booked for next year.

There has been a shift in policies in the year since The Globe’s investigation into how police handle sexual assault complaints was published. Those who work daily with sexual assault victims, in policing, academia and victim support service, share what they’ve experienced as this change in culture continues.

— with a report from Michelle Zilio

Robyn Doolittle is a reporter with The Globe and Mail’s investigative team. robyndoolittle@globeandmail.com

View more from the unfounded series