Larry Fisher garnered national media attention in the late 1990s, when DNA evidence proved that he, not David Milgaard, raped and murdered Gail Miller, a Saskatoon nursing assistant, in 1969. The revelation led to Mr. Milgaard's exoneration after 23 years in prison. For Mr. Fisher, a serial rapist who died at the age of 65 on June 9, at the Pacific Institution in Abbotsford, B.C., it meant the rest of his life would be spent behind bars.

With intense brown eyes and a rugged face, Mr. Fisher was conventionally attractive. While still a teenager, he married his first wife, local girl Linda Pambrun, in North Battleford United Church on Dec. 16, 1967.

The newlyweds lived in Saskatoon on Avenue H with Ms. Fisher's uncle, Clifford Pambrun. Over the next year, the couple moved around Saskatoon's working-class west side and on April 25, 1968, Linda gave birth to a daughter, Tammy Fisher.

In November, 1968, the young family rented a basement apartment at 334 Avenue O South on Saskatoon's west side, where they lived for about a year.

On Jan. 31, 1969, when news of nursing assistant Gail Miller's murder was announced on the radio, Linda Fisher immediately thought of her husband.

In the midst of a heated argument about Mr. Fisher's recent whereabouts, Ms. Fisher flung out an accusation: "My knife is missing. You're probably responsible for killing that girl."

According to Ms. Fisher's statement to police, her husband's face drained of all colour and he didn't have a ready response. He just stood in front of his irate wife, outfitted suspiciously in colourful dress clothes rather than his usual beige work garments.

Ms. Fisher said he didn't go to work that morning, which was unusual for him. He was a construction worker and typically rode the same bus to work as Gail Miller, his neighbour.

Ms. Miller had lived in a rooming house on Avenue O South and worked across town at Saskatoon City Hospital, in the pediatric ward. On the day she died, her shift started at 7:30 a.m. and she encountered Mr. Fisher on his way home from a long night of drinking.

Her body was discovered at 8:30 a.m. that day in the back lane of Avenue O South. A young girl on her way to school found the petite 20-year-old face down in a snow bank and dead. Ms. Miller had been raped and stabbed, her throat slashed.

During that same morning, 16-year-old David Milgaard stopped briefly in Saskatoon. He was on a road trip from Regina to Vancouver with his friends Ron Wilson and Nichol John. The group stopped in Saskatoon to pick up Albert "Shorty" Cadrain.

Larry and Linda Fisher lived in Mr. Cadrain's basement apartment. The travelling friends later told investigators that Mr. Milgaard had blood on his clothes and was behaving strangely.

Based on these statements and circumstantial evidence, Mr. Milgaard was arrested in Winnipeg on March 2, 1969, charged with the murder of Gail Miller and found guilty on Jan. 31, 1970.

That year, Mr. Fisher moved to Winnipeg and in September, he was arrested during the act of raping a woman. He was subsequently charged by the Provincial Court of Manitoba with two counts of rape, one count of robbery and one count of possession of a weapon.

Some months later, Mr. Fisher pleaded guilty in Regina to three additional counts of rape and one count of indecent assault that all took place on Saskatoon's west side. Serge Kujawa, director of public prosecutions, represented the Crown the day when Mr. Fisher was sentenced to 14 years in total for the Saskatoon and Winnipeg rapes.

Prior to Mr. Fisher's guilty plea, RCMP officer Edwin Rasmussen had filed a report to the Attorney-General's Office that advanced the theory that several rapes in Saskatoon during the autumn of 1968 might be connected to Ms. Miller's murder. But Mr. Kujawa never read the report because the Miller case belonged to his underling, T.D.R. (Bobs) Caldwell.

David Asper, who worked alongside criminal lawyer Hersh Wolch on the Milgaard appeal in the late 1980s to early 1990s, attributes this miscarriage of justice to "tunnel vision" at the Saskatchewan Ministry of Justice. The investigators and prosecutors were convinced they had their man and proceeded based on that false assumption.

Joyce Milgaard, however, maintained her son's innocence and spearheaded a national PR campaign proclaiming his innocence and demanding his release. It was her relentless advocacy that eventually elicited Linda Fisher's crucial testimony against her husband.

In 1980, a decade after Mr. Milgaard's wrongful conviction, Linda Fisher received a flyer that Joyce Milgaard had circulated to solicit information on the Miller murder. It triggered Ms. Fisher's recollection about her missing paring knife. But when Linda Fisher made a statement to Saskatoon Police about her ex-husband (they split up in 1978), her suspicions were ignored.

By this time, Larry Fisher had been released on mandatory supervision from a lengthy sentence at the Saskatchewan Federal Penitentiary in Prince Albert.

On March 31, 1980, just three months after his release after serving time for the Saskatoon and Winnipeg rapes, Mr. Fisher raped and slashed a 56-year-old North Battleford woman. He was convicted and sentenced to 14 years in prison for mandatory supervision revocation.

In 1988, Mr. Fisher married Lillian Dredger in a jailhouse ceremony. He completed his sentence in 1994 and was released once more. He and his second wife divorced two years later.

Despite Mr. Fisher's multiple convictions for similar crimes and his proximity to the scene of Ms. Miller's murder, Winnipeg lawyer David Asper says it's conceivable that the truth might have never been known. "We almost had to use a welder's torch to break through the institutional resistance to the very idea that it could have gone this wrong."

Mr. Asper recalls that several police officers suspected that Mr. Fisher was more likely the perpetrator. "But they just wouldn't say anything because there was this pervasive belief that Mr. Milgaard had done it. There was this innuendo that he was some kind of weirdo killer. And people who thought differently were almost intimidated from saying anything," Mr. Asper says.

After Mr. Milgaard's 1970 conviction, his lawyer, Cal Tallis, tried unsuccessfully to have the conviction overturned. Saskatchewan Justice continued to advance its Milgaard theory. Bobs Caldwell even wrote to the National Parole Board urging that Mr. Milgaard be denied release in 1972 and again in 1974.

Twenty-two years later, Joyce Milgaard and her legal team had the case reviewed by the Supreme Court of Canada. The five Supreme Court judges deemed that if Mr. Milgaard were tried and convicted a second time, he'd be granted a pardon. Mr. Milgaard was released on bail in April, 1992, after serving 23 years in prison for Larry Fisher's crimes.

New DNA evidence was introduced into the mix by Mr. Milgaard's legal team in July, 1997. This new science exonerated Mr. Milgaard and implicated Mr. Fisher. Larry Fisher, who fled Saskatoon upon hearing news of the DNA report, was arrested in Calgary on July 25 and charged with the sexual assault and murder of Gail Miller.

The Fisher trial was moved from Saskatoon to the more neutral location of Yorkton, Sask., in October, 1999. Linda Fisher, who first voiced her suspicions of her husband's guilt in 1980, was among the Crown's key witnesses.

Crown prosecutor Dean Sinclair recalled the tone of the proceedings. "It was kind of intense. We were prosecuting a 30-year-old case. Not quite 30 but going on 30. Following hard on the heels of a wrongful conviction," Mr. Sinclair, now the director of appeals at Saskatchewan Justice, says. "Mr. Milgaard had been wrongfully convicted of the murder, so this was important. We had gotten the wrong guy and it was important to get the right guy."

Mr. Sinclair never spoke directly to Mr. Fisher and he says Mr. Fisher never uttered a single word. "He was very calm and he was very interested in the proceedings. He was very attentive. He wasn't fazed by much that happened in court."

Mr. Sinclair says the guilty verdict against Mr. Fisher was a just outcome. "The DNA evidence was irrefutable," he says. 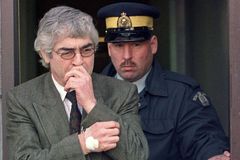