When she saw the Fort McMurray wildfire on television, Sibongile Zwane admits she found it frightening. In all her firefighting experience in the South African bush, she had never seen flames leaping across roads and climbing to the tops of tall pine trees.

But on Sunday, after a 10-day boot camp by Canadian trainers, she was one of 300 South African firefighters flying into Alberta to help fight the massive blaze near Fort McMurray. Their chartered Air Canada flight from Johannesburg arrived in Edmonton late on Sunday night after a 24-hour journey.

"I'm not afraid any more," the 21-year-old firefighter says. "They've trained us on what to expect. I'm strong now. I'm a firefighter and we have to help."

The mission is the biggest ever non-military deployment of South Africans to help a foreign country. For the exhausted Canadian firefighters, the impressively fit and well-trained South Africans will be a welcome relief.

The South African government sees it as repaying a debt to the Canadian people for their support for the anti-apartheid struggle. But it's also a strategy for changing the lives of unemployed South African youths. The jobless young men and women were recruited for a government-funded organization called Working on Fire, which has trained 5,000 firefighters to serve on 200 bases across South Africa.

Ms. Zwane, from a small town near Johannesburg, has never travelled outside South Africa before. Indeed she has never even been on an airplane before.

But last Monday, the call came from Canada: Firefighters were needed in Alberta. The huge wildfire, which forced 80,000 people to flee from Fort McMurray this month, now covers more than 5,200 square kilometres of forest. After more than a month of gruelling work, the Canadian firefighters need a break now, and the South Africans will help to step into the breach.

"That fire is so big and they can't extinguish it and they need help," Ms. Zwane said. "I'm excited to go. The Canadians taught us how to extinguish those tall fires with special hoses."

With a shortage of water and specialized equipment here, the South African firefighters often use "firebeaters" – wooden sticks with a leather pad attached – to beat out a bush fire. But at their boot camp this month, the South Africans learned new water-handling techniques for the Canadian fires.

Those who were chosen for the latest mission are the fittest and most skilled of the 5,000 in the organization. After a month in Canada, they will take home the equivalent of about $1,500 each. It doesn't seem like much, but it's 10 times more than their normal monthly stipend in the training program. It will help many of the firefighters to get out of shacks and build new brick houses, get driver's licences or enter postsecondary education.

At a farewell ceremony on Saturday at their temporary camp near Johannesburg, the 300 firefighters danced and sang the morale-building songs that they sing daily in the bush. "We are confident, we are excited," they sang in the Zulu language.

"It means a lot to us that you would travel so far to help us," she told the South African firefighters. "Our firefighters are tired. They've fought for a month without a break, and the worst of the fire season is still ahead."

Barbara Thomson, the South African deputy Minister of Environmental Affairs, recalled Canada's help for the fight against apartheid. "As South Africans, we feel indebted to the Canadian people," she told the ceremony.

"Remember that these are the people who stood on our side in our times of trouble. So today we are paying back."

The firefighters were mostly recruited from rural areas with high unemployment. So as part of their final preparations before flying to Canada, they were given a two-day course in financial management, to help them avoid making mistakes with their limited wages.

"For them, just to get to an international airport is a life-changing experience," said Llewellyn Pillay, managing director of Working on Fire. "To put them on a plane and send them to a foreign country fundamentally changes their lives."

How 80,000 Fort McMurray residents will be reintroduced to their fire-ravaged city next week
May 27, 2016 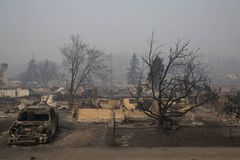