At 73, Doug Tebow's bashed-in skull - a result, he says, of a childhood spent behind locked doors at an institution for the developmentally disabled in Orillia, Ont. - has healed as much as it's ever going to. The deeply recessed scar could easily cradle a golf ball.

The physical abuse he says he and other residents suffered during his 17 years at Huronia Regional Centre isn't the only thing that haunts him. "I never learned to read or write," he says, explaining he received no formal schooling after he and three of his Guelph-born siblings were dropped off at the facility in 1945.

Mr. Tebow, who now lives in Peterborough, Ont., on a small disability pension, is among thousands of prospective residents and family members covered by a class-action lawsuit against the Province of Ontario, as the operator of Huronia Regional Centre, for systemic neglect and abuse over 133 years, until its closing on March 31, 2009.

On Wednesday, Mr. Justice Maurice Cullity, who issued a ruling in April giving the case the conditional go-ahead as a class action, is expected to formally certify the lawsuit. It's the first time the courts have allowed a class-action lawsuit against a government-operated residential institution for the developmentally disabled in Ontario and, if it goes to trial, a first in Canada. The province will file a statement of defence once the action has been officially certified, but Brendan Crawley, spokesman for the Ministry of the Attorney-General, said for now he wouldn't comment further.

Since 1876, when it opened as the Orillia Asylum for Idiots, the institution has at times been used as a "dumping ground" for children with minor disabilities or even behavioural issues, as well as wards of the province, says Kirk Baert, who is representing the plaintiffs. Mr. Baert was also the plaintiffs' lead lawyer in the aboriginal residential schools case.

Over the years, allegations of abuse, neglect and deaths at Huronia and similar institutions surfaced, including a scathing government-commissioned report by Walt Williston in 1971 and another report arising out of a government inquiry into Huronia in 1976.

Despite numerous calls for reform and its closing, few changes were made to the institutional system, Mr. Baert says. In 2004, after years of trying to encourage deinstitutionalization and moving many residents to community-based living arrangements, the Ontario government announced plans to shut down Huronia, "These were invisible people," Mr. Baert says. "There were reports saying this is a severely problematic place, yet it took them three decades to get around to doing something about it."

Marilyn Dolmage, whose brother, born with Down syndrome, died of untreated pneumonia at Huronia when he was eight years old, worked as a social worker there from 1968 until 1973 and has kept in touch with several of its residents.

"They had all of their citizenship rights stripped away. They had no control over their lives. They were lined up to eat, they were lined up to shower," says Ms. Dolmage. adding that she also witnessed residents being tranquillized, kept in caged cots and sprayed with a water hose after eating. As litigation guardians for the two lead plaintiffs, Ms. Dolmage and her husband Jim are the main champions of the lawsuit.

Lead plaintiffs Marie Slark and Pat Seth, who are friends of the Dolmages, both say they entered Huronia at age 7 after they had been diagnosed as "mildly retarded."

"I felt like I was being punished," says Ms. Seth, 52, who now lives in Toronto. "[My parents]put me in there thinking they were going to make me normal. How can a place like that make you normal?"

In 1968, at its largest capacity, there were 2,600 people living at Huronia. By 1996, due to the government's move toward deinstitutionalization, there were 583 residents, and by 2004, when the government announced it planned to eventually close Huronia, there were fewer than 350 people, says Gordon Kyle, director of government relations for Community Living Ontario. Most of the remaining residents, whose average age was 49, were moved into smaller group homes or retirement homes; some were able to live independently or with family support, he says.

Mr. Baert says he will subpoena cabinet documents from the 1960s and 1970s if the province doesn't willingly hand them over to establish why the government of the day apparently opted not to correct the problems outlined in the Willard and other reports.

For Mr. Tebow and others, the Ontario lawsuit is a chance to have his story heard, though he dislikes remembering his days at Huronia.

"It was like a prison," says Mr. Tebow, who, with just $20 to his name upon discharge, says his life has since improved.

"I was happy when they opened that big door."

1876: The Orillia Asylum for Idiots opens on the shores of Lake Simcoe, for the care and treatment of intellectually disabled children and adults. It is later renamed Ontario Hospital School, then eventually named Huronia Regional Centre.

1971: In a government-commissioned report, Walton B. Williston issues a scathing indictment of inadequacies at Ontario institutions and calls for widespread reforms.

2004: The Ontario government announces plans to shut down Huronia Regional Centre by 2012. There are fewer than 350 residents remaining; their average age is 49.

2004: The Province of Ontario says it will shut down Huronia Regional Centre by 2012.

2006: The government announces plans to speed up the closing by three years. Worried family members protest because the centre is the only home their relatives have ever known.

Summer, 2008: At the request of Siskinds, Toronto law firm Koskie Minsky agrees to take the case and begins to interview former residents.

April 19, 2010: Judge Cullity conditionally approves a class action lawsuit against the Province of Ontario by residents of Huronia Regional Centre and their families, subject to meeting certain requirements.

July 28, 2010: Expected to be the final hearing in the certification process.

A life ruined by abuse and 'bashed around' by the courts
September 28, 2009 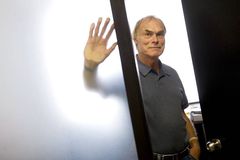 Disabilities not a reason to send a person to 'jail'
April 2, 2009
Follow us on Twitter @globeandmail Opens in a new window
Report an error Editorial code of conduct
Due to technical reasons, we have temporarily removed commenting from our articles. We hope to have this fixed soon. Thank you for your patience. If you are looking to give feedback on our new site, please send it along to feedback@globeandmail.com. If you want to write a letter to the editor, please forward to letters@globeandmail.com.
Comments