These were indeed the best Games ever - at least if the measure is Team Canada's medal haul.

Thanks to a remarkable final few days of competition, Canadian athletes won 14 gold medals in Vancouver - twice as many as the team won in Turin, and more than any nation has ever won at a Winter Olympics. The previous record for gold medals was 13, set by Norway in 2002 and the Soviet Union in 1976.

This unprecedented success at the podium, punctuated by the men's hockey team's win Sunday, was about more than mere athletic achievement. It was also hard-won vindication for the Canadian Olympic Committee, which had endured persistent criticism about the way it funds the country's Olympic participants.

Sunday, COC officials claimed victory despite falling short of their initial target of winning more total medals than any other country - the objective of their controversial $110-million Own the Podium program.

"I don't think we set the wrong target at all," said COC president Michael Chambers, who is stepping down from the post. "By setting the target that we did, we won [14]golds. You reach for the stars and you grab what you get. We happened to grab [14]of the brightest stars up there."

Incoming president Marcel Aubut was more direct: "As I said in the opening press conference, we were going to own the podium and we did."

Canada ended up with 26 medals, third behind the U.S. and Germany. That was two more than the team won during the past Winter Olympics but short of the 30-plus medal target COC organizers had set.

Mr. Aubut said the success of the Vancouver Games may impact the COC's prediction for the 2012 Summer Games in London. Currently the COC is forecasting the team will finish 12th in London with more than 20 medals. Canada won 18 medals at the 2008 Olympics in China and finished 14th.

"I think these Games [in Vancouver]are an incredible boost for the summer athletes," he said. When asked if he would change the COC's targets for London, he replied: "It's possible, very possible."

The medal haul this year was so high that the Canadian Olympic Committee will be doling out far more than it expected for medal bonuses. The COC awards $20,000 for gold, $15,000 for silver and $10,000 for bronze. Officials said they'll be paying out $1.7-million in bonuses. "I'm happy to spend that money," Mr. Chambers said.

Winning so many gold medals came as a relief to many Canadians who have long lamented the fact that this country had never won gold on home soil. That was something even International Olympic Committee president Jacques Rogge noted yesterday.

"I was present as an athlete in Montreal and I heard everyone complaining, 'We have no gold medals,' " recalled Mr. Rogge, who competed in sailing for Belgium at the 1976 Olympics. "I was a team leader in Calgary and everyone was whining, 'We have no gold medals.'" He added that the perception of the Vancouver Games changed among Canadians "when [Alex]Bilodeau won the first gold on home soil."

Despite the success of the Vancouver Games, the future of the Own the Podium program remains in doubt. Roger Jackson, OTP's chief executive officer, said the program needs an additional $22-million annually from the federal government to make up for funding that ends now that the Olympics are over.

Mr. Jackson pointed to recent polls that suggest Canadians support the program, saying he hopes politicians will respond. About half of OTP's budget comes from the federal government, with the remainder from provinces and corporations. The federal government has committed to keeping up its share, but most of the provinces and corporations have not.

Mr. Jackson also defended the name Own the Podium, saying it was not an attempt to present Canadians as arrogant or unwelcoming at the Games. Competitors from several other countries criticized the name and some used it as a rallying cry for their teams.

"It was a bold statement of what we should strive to do," Mr. Jackson said.

Mr. Rogge came to the defence of the Own the Podium program. "There has been a lot of criticism [about OTP]" he said yesterday. "But you can legitimately ask whether there would have been any gold medals without Own the Podium."

Canadians took to the streets Sunday after the gold-medal win by Canada's men's hockey team in Vancouver. Share your party pictures and we'll publish our favourites at globeandmail.com

2. Upload with our online tool: 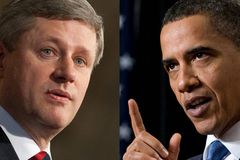 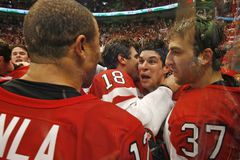 We're now aspiring for more
March 1, 2010
Follow Paul Waldie on Twitter @PwaldieGLOBE
Report an error Editorial code of conduct
Due to technical reasons, we have temporarily removed commenting from our articles. We hope to have this fixed soon. Thank you for your patience. If you are looking to give feedback on our new site, please send it along to feedback@globeandmail.com. If you want to write a letter to the editor, please forward to letters@globeandmail.com.
Comments