As night falls across surrounding corn fields and pasture, the abandoned farm where eight outlaw bikers were shot to death more than three years ago is a spooky place.

Along Aberdeen Line, a half-hour drive west of London in the municipality of Dutton/Dunwich, carved pumpkins and other Halloween fare decorate the neat homes dotted up and down the road.

But in their midst are what's left of a real house of horrors, the long-time lair of Wayne Kellestine, the most notorious of six Bandidos motorcycle club members convicted yesterday of murdering eight of their brethren.

It was at the Kellestine farm that the killings took place in April, 2006.

One of the eight died in a gun battle, the trial heard.

But all the others were held captive overnight in the huge barn adjoining the farmhouse before being taken out to their cars at intervals, forced inside and shot dead.

Then their bodies were hauled a short way up Highway 401 to the nearby hamlet of Shedden, dumped and almost immediately discovered.

From a few hundred metres away, the crime scene looks like any other Ontario rural property on a late fall afternoon: Rolling fields, a clutch of buildings, cows grazing in the distance.

But up close, inside the wire fence and double-padlocked gate that encircle the property, it feels decidedly more sinister.

Local residents give the place a wide berth.

Plenty had a passing acquaintanceship with Mr. Kellestine during the 19 years he lived here up until his arrest, 36 hours after the murders.

"He didn't bother us too much most of the time, but everybody knew he was trouble, there was often biker types around, and there was always talk that he had killed people," said a retired farmer, who like other neighbours was adamant his name not be included in any article about Mr. Kellestine.

Inside the compound, padlocked shut by the Municipality of Dutton/Dunwich after a lien was placed on the property in lieu of unpaid taxes, is a tableau of decay: A thicket of waist-high grass, a rusting red tractor, children's swings and toys, a listing flag pole.

His live-in girlfriend Tina Fitzgerald and their young daughter were allowed to return there and live after police spent weeks combing the property.

But 18 months ago the house caught fire - from careless smoking, neighbours say - and earlier this year it was demolished.

Now Ms. Fitzgerald and her daughter live in a rented apartment in nearby West Lorne.

Three other structures, however, still stand: A mobile home on wheels, in which bikers have been seen staying, although not recently; a tumbledown garage; and the enormous post-and-beam barn that was the main venue of the massacre, towering above the flat farmland.

On its north wall, easily visible to anyone driving along Aberdeen Line, is a white, circular emblem displaying a fist clutching a black-and-red dagger redolent of a swastika; the logo of the Annihilators, a long-gone biker gang to which Mr. Kellestine once belonged.

Inside the barn, where the Bandidos prisoners lay on the floor for hours before being executed, is a vast dusty jumble of old furniture, farm machinery and other detritus.

And still on one wall hangs a large Confederate flag.

Now 60 and facing at least 22 more years behind bars, its owner is unlikely to see any of his stuff again.

And no one from around here is going to miss him much.

"Time to put this all behind us and move on," said an auto mechanic who lives up the road. 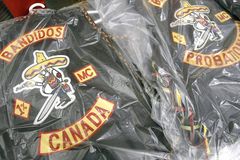