Indigenous people who were taken from their families as part of the Sixties Scoop packed an Ontario courtroom for a milestone class-action hearing that hinges on the value of cultural identity – and whose obligation it is to protect it.

The hearing in Toronto on Tuesday was so well-attended that the jury box was used to seat elders as well as the lead plaintiff, who contends the $1.6-billion lawsuit is as much about the historical mass adoption and foster-care placement of thousands of indigenous children into non-indigenous homes as it is about the need to protect the children of today, no matter their ethnicity. Only the plaintiff provided its arguments Tuesday, with the government's lawyers slated to present their case in early December.

"We take it for granted that … we can eat borscht, drink Guinness, practise halal or bar mitzvah, wear a turban or a kilt," Jeffery Wilson, the plaintiff's lead counsel, told the court. "And not one of us would ever reasonably conceive of denying our children the opportunity of knowing their family's and extended family's traditions, customs, culture, language – the core of their identities."

Speaking in Algonquin, he said that "we must never let this happen again." He turned to the indigenous people in attendance and said that he and his co-counsel, as Canadian citizens and lawyers, apologize for the harm they have suffered. After seven years of delays and appeals, Mr. Wilson is asking Superior Court Justice Edward Belobaba to consider the evidence and make a decision about liability, without going to trial.

It is unclear whether Justice Belobaba will have to make that decision. Prime Minister Justin Trudeau has pledged to rebuild the relationship between Ottawa and indigenous people, and he has directed Justice Minister Jody Wilson-Raybould to ensure the government's litigation strategy is consistent with its commitments. Just last week, Indigenous Affairs Minister Carolyn Bennett said Canada is willing to settle the Sixties Scoop lawsuits that have been launched across the country.

All the while, however, the government's lawyers tried to delay Tuesday's hearing and then filed thousands of pages of disclosure in the days leading up to it. Justice Belobaba referenced a possible settlement at the conclusion of the hearing, saying the proceedings will continue on Dec. 1 and Dec. 2 – unless an agreement is reached. Gail Sinclair, one of the government's lawyers, told The Globe after the roughly two-hour-long hearing that the defence will be providing its response in December. Asked about the prospect of a settlement, Ms. Sinclair declined to comment.

The class-action lawsuit stems from a Canada-Ontario agreement in which upward of 16,000 indigenous children were placed with non-indigenous families between 1965 and 1984. Mr. Wilson argued Tuesday that Canada failed to uphold one of the agreement's key provisions, which said First Nation bands must be consulted – and provide their consent – before provincial child-welfare services were extended onto their reserves. That failure, he said, amounts to a breach of fiduciary duty.

"The case is precedent-setting because it is the first in the Western world testing the state's obligation to protect and preserve the cultural identity of children, in this instance First Nations children," Mr. Wilson said in an interview after presenting his oral arguments.

At a rally near the courthouse before the proceedings, Ontario NDP MP Charlie Angus questioned why the hearing was taking place if Canada is, in fact, willing to settle. "This government talks very positively, but they still have the thugs in the justice department … fighting these court actions on a daily basis," he said. "This is a day of justice, a day of reckoning."

The lead plaintiff, Beaverhouse First Nation Chief Marcia Brown Martel, said the government's public statements give her hope that a settlement can be reached. "I have optimism," she told The Globe at the rally, where hundreds of adoptees and their supporters let out a war cry, drummed, sang and burned sage. "Actions," she added, "are the footsteps that happen after honourable words." 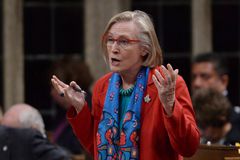 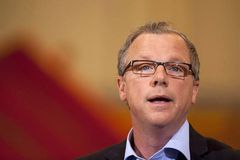 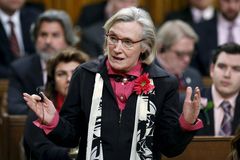