A man charged in an alleged plot to attack a Via Rail passenger train says he wants to be represented by a lawyer who agrees the Koran should be used as a "reference" in his case.

Chiheb Esseghaier appeared in a Toronto court by video link from jail Thursday morning and said he has made an application for representation by legal aid, but is seeking a lawyer who can co-operate with his need to use the Muslim religious text in his defence.

"I am agreed to have a lawyer, no problem," said the 30-year-old Montreal man, who appeared wearing an orange prison jumpsuit. "But I wish this lawyer can co-operate with me, because I need the holy book as reference for my judgment. I don't want a book written by humans," he said.

He told court during an earlier appearance he does not recognize the authority of the secular Criminal Code.

The RCMP has called the case the first known alleged plot in Canada directed by al-Qaeda. Police have alleged the suspects were conspiring to derail a passenger train.

The justice of the peace told Mr. Esseghaier he would have to discuss his need to use the Koran with his lawyer once one has been assigned.

He was scheduled to return to court June 3 to provide an update on his legal aid request.

Mr. Jaser also appeared by video link and was scheduled for another court appearance on June 25 as his case goes through the disclosure process.

One of his lawyers, Brydie Bethell, said outside court that she has not heard Mr. Jaser making similar remarks about the legitimacy of Canada's criminal laws.

Ms. Bethell said Mr. Jaser "denies all of the allegations against him" and said he is under stress but "considering the circumstances he's doing okay." 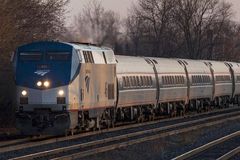 FBI arrests Quebec student linked to Via terror suspect
May 9, 2013