Amid the sullen juvenilia that cluttered his Facebook page, there was a sign this summer that a young Quebecker's teenaged angst was crystallizing into jealousy and anger at a specific person.

One evening in August, the 17-year-old boy wrote: "That strange feeling when you call your girlfriend and her mother says she's at her boyfriend's but oddly you're home alone :("

The young man and a friend of the same age are now each facing three murder counts after two sisters and the boyfriend of the younger sister were shot to death on Tuesday in a residential district of Trois-Rivières.

Police found the bodies of the two sisters, aged 22 and 17, and that of a 17-year-old youth in the sisters' family home on Sicard Street at 8 a.m.

According to local media, two youths had arrived by bus, carrying hunting guns in their bags. The sisters' mother was also targeted but had left for work when the two shot their way into the house. The older sister was killed as she called 911 and a recording of the call will be entered as evidence in the court case. The youths wanted to wait for the police to engage in a gunfight, raising the prospect that they wished to be killed in what is colloquially known as "suicide by cop."

However, the Journal de Montréal reported, the youths got impatient and were leaving the crime scene when patrollers intercepted them. A photo from a neighbour, which was posted on social media, showed one suspect, standing in the middle of a snow-blanketed street, with his hands on his head while the police keep him at gunpoint near the victims' home.

The Trois-Rivières police believe that one of the suspects is an embittered jilted suitor. He was interested in the younger of the two sisters but had been rebuffed.

In addition to the charges of first-degree murder, the two suspects are each accused of three counts of conspiracy to murder the mother of the two sisters and to murder a number of police officers.

Clad in white forensics coveralls, the two suspects appeared at the provincial courthouse on Wednesday. Before a packed courtroom, prosecutor Hippolite Brin said the Crown would seek adult sentences should the defendants be found guilty.

The names of the suspects and victims cannot be made public, according to the Youth Criminal Justice Act, because four of them are minors and naming the 22-year-old woman would identify her sister. However, their identities are known to many in Trois-Rivières, a former paper-mill town midway between Montreal and Quebec City. 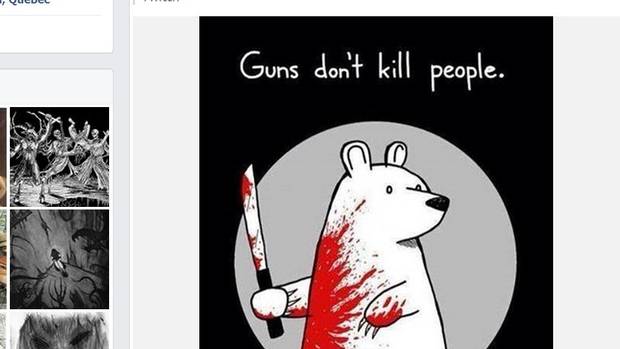 Shock, grief and anger spilled onto social media, with many young people posting insults and threats on the Facebook pages of the two suspects.

Many also highlighted passages in the account of one of the suspects that featured morbid, menacing references that seemed to foretell the tragedy. 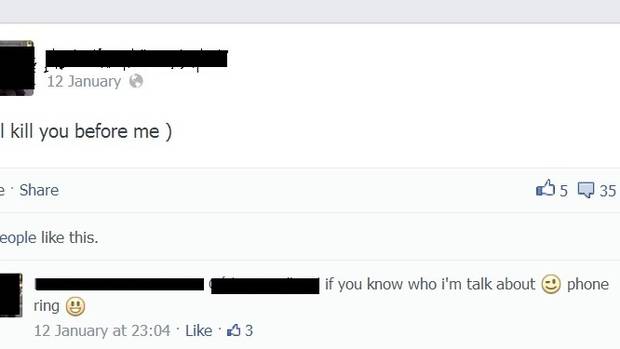 The 17-year-old, a francophone, penned many posts in literal English translations of his native language.

Just a month ago, for example, he wrote: “I’ll kill you before me.”

He then added, to the attention of the other suspect, “If you know who I’m talk about, phone.”

The grim message was accompanied by two emoticons, one winking and the other smiling. 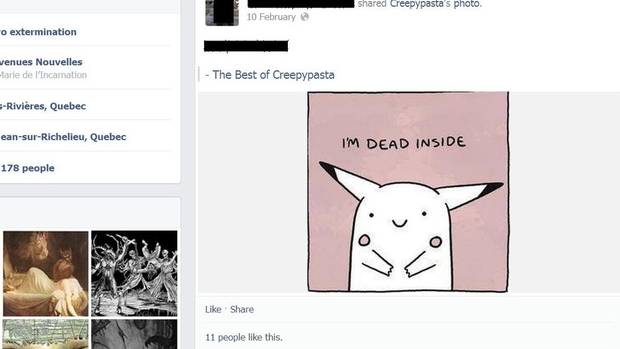 The posts, often written late at night, brim with ghoulish images, such as drawings of grim reapers and hanging bodies, and self-pitying notes, writing, for example, about “being alone” on a Friday evening.

In the last post, the night before the triple homicide, he posted a cartoon to the attention of his alleged accomplice. It said: “I’m dead inside.”