The accused killer who allegedly ruined the Parti Quebecois election-night celebration is speaking out from his jailhouse — just as the new government is being sworn in.

Montreal radio station CJAD is reporting that Richard Henry Bain phoned its newsroom today from his prison infirmary to say that he believes the city should separate from the province.

It says they interviewed him for half an hour, but chose to only run a brief snippet of the interview on the air.

In a clip that aired, Mr. Bain is heard sharing his view that Montreal should separate from the rest of Quebec because, in his opinion, that might help ensure greater peace between anglophones and francophones.

"My vision is that the island of Montreal separate to become its own province," Mr. Bain said.

The radio station says Mr. Bain placed the call without his lawyer's knowledge.

The businessman faces a charge of first-degree murder in connection with the shooting that took place only metres from where PQ premier-elect Pauline Marois was giving her victory speech.

One man was killed and another was wounded in the election-night shooting.

Ms. Marois was sworn in today as the 30th premier of Quebec — and is the very first woman to hold the job in that province.

The 62-year-old Bain also faces 15 other charges — including three counts of attempted murder and arson in the attack outside the Montreal nightclub.

Mr. Bain's next court appearance is set for Oct. 11. Quebec shooting was an attack on all of Canada
September 6, 2012 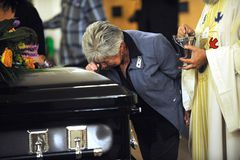 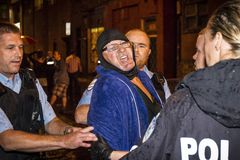 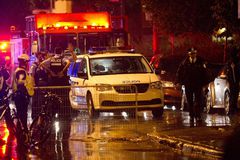