Burnley (Rocky) Jones had a smile that could light up a room, a leadership style that inspired a generation of young black people in Nova Scotia and enough political grit that he was once considered a threat to national security.

Mr. Jones, a high-profile Halifax lawyer who focused on racial equality and labour law, died Monday in hospital after a heart attack in his home. He was 71. A co-founder of the Black United Front of Nova Scotia and the National Black Coalition of Canada, Mr. Jones was named to the Order of Nova Scotia in 2010.

Rev. Rhonda Britton of Cornwallis Street Baptist Church in Halifax said Mr. Jones was a human rights crusader and a champion of Nova Scotia's black community. But he was also a down-to-earth man whose infectious smile and relentless optimism made him a joy to be around, she said.

"He was such a likable person," Rev. Britton said. "He was very friendly, very warm, always engaging, always approachable. He had such a warm smile."

Rev. Britton worked closely with Mr. Jones on the Ujamaa community development initiative, set up a few years ago to empower African Nova Scotians through public-private investments and partnerships.

"He was always encouraging people to be the best that they could be and wanting to see people advance – not just black people, all people," Rev. Britton said. "He spoke in this very caring, empathetic, persuasive, charismatic kind of a way."

Born in Truro, N.S., Mr. Jones's political awakening came in the early 1960s when he was living in Toronto, where civil-rights protests were often led by white demonstrators. He got involved and soon realized he had a gift for public speaking.

"I discovered I could motivate groups," he told the Halifax Daily News in 1995.

On returning to Nova Scotia in the 1960s, Mr. Jones put his skills to work, taking aim at the province's entrenched system of segregation and racial discrimination. He helped set up Kwacha House, a project that gave inner-city youth a place to discuss their challenges.

He also led protests and, at one point, invited members of the U.S.-based Black Panthers to visit Halifax. His activism attracted the attention of the RCMP, which regarded him as a dangerous radical.

"We knew the phone was tapped and we knew we were under general surveillance," Mr. Jones told the Daily News, citing documents he obtained through Access to Information requests.

According to one document, the Mounties thought Mr. Jones was attracting followers by teaching eight-year-olds to make Molotov cocktails.

"Now, we can laugh about it," said Rev. Britton, recalling that Mr. Jones used to joke about being followed by plainclothes officers. "But this is what happens when you start speaking out against the powers in place. You become a threat."

But Mr. Jones's actions made it clear he thought education, not radicalization, was key to helping improve the lives of black Nova Scotians. In the 1970s, he set up the Transition Year Program at Dalhousie University in Halifax, which helped blacks and natives move on to higher learning.

Carolann Wright-Parks attended Dalhousie in the early 1970s, because of the program.

"He was my mentor," said Ms. Wright-Parks, who now works with Ujamaa and as an economic development manager at the Greater Halifax Partnership.

"A lot of us are now in really strategic, influential positions, either in government or as lawyers," Ms. Wright-Parks said. "He was influential in next-generation leadership … He had an amazing impact."

After graduating from law school in 1992, Mr. Jones worked as a legal aid lawyer, then opened his own firm.

Maureen MacDonald, the province's African Nova Scotian Affairs Minister, issued a statement Tuesday saying Mr. Jones's prominent voice was part of many of the civil-rights discussions in the province.

"Rocky was a staunch and respected leader … for the last four decades," Mr. MacDonald said. "He dedicated his life to championing racial equality and justice through his chosen profession, law, and as a citizen of the world."

"A love for humankind is just written on his face," Rev. Britton said. 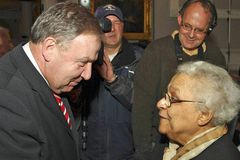