Advocates of a bill that would ban restaurants from making waiters give a portion of their tips to their employers say the decision by Ontario's best-known golf courses to stop sharing service charges with servers shows the need to move forward with legislation that has languished for years.

Last month, ClubLink, the company that owns high-end golf courses in Canada and the United States, including DiamondBack, Glen Abbey and Glencairn, told its wait staff it would no longer distribute most of the service charge it collects at corporate dinners, weddings, baby showers and other special events. Instead, serving staff would receive wage increases of $4 to $7 an hour, depending on seniority. Many of those affected are students who work there for the summer and are concerned the increase will not make up for the lost gratuities.

"The tips were more than half of the summer's income," said the father of one server who wanted to remain anonymous. "If you are planning a wedding, and there is a service charge, you assume you're tipping those people."

The company said it is surprised staff are upset.

"We've been pretty adamant that we're not in this to take money from the server. They should know, because we can show them, over the course of the year it will work out. They should not be making less," said Neil Osborne, vice-president of the company.

ClubLink has also changed the tipping policy in its restaurants so that it no longer automatically includes a service charge, a change some waiters said they expect will give them more money even after they pool a percentage for kitchen staff.

"I think that's fair because kitchen staff should get more," one waiter said.

Had Bill 12, a proposed law that would ban the practice of waiters having to give a percentage of their sales to management, been in place, Clublink's policy would have likely contravened it.

"If they are charging a non-discretionary 15 per cent on the bill and calling it a gratuity, I think it would run afoul of the bill," said Arthur Potts, MPP for Beaches-East York, who introduced Bill 12. "If they were putting in a 15-per-cent increase in food and beverages and saying they don't accept tips, there is nothing wrong with that."They may find themselves caught out in that they would be paying their employees more, and the employees would get that gratuity."

The impact of Clublink's new service policy on its bottom line will not be apparent until summer revenue is tallied. This year, the Canadian Open will return to Glen Abbey after a one-year absence, which should help it recoup some of the 3.2-per-cent decrease in food revenue at its Canadian golf courses last year.

Bill 12 is scheduled for hearings in the fall, and so it would not help students this summer.

"Students are a little more vulnerable in that they are only with that employer for a couple of months, two or three months, and if you're desperate for work, you can't shop around and find an employer who would not do this," Mr. Potts said.

Waiters said almost all restaurants where they have worked, including in Alberta and B.C., have adopted "tipping-out," which gives kitchen staff and buspersons a cut of the tips. While it seems fair, waiters say they have frequently not been sure that all the money they put into a common pool reaches those workers.

One employee of a downtown Toronto hotel said waiters must pool their tips and the hotel management distributes half at the end of each week. "It's never been clear how they do that, if it's equal, or based on when you worked," he said.

"The norm in the restaurant industry is that a third of tips may go out, including the payout to the kitchen and managers," said Lis Pimentel, president of Unite Here Local 75, the union representing an increasing number of hotel and hospitality workers in Ontario.

The arrangements for large events such as banquets are part of the collective agreement, with the union negotiating the split of the service fee between servers, the employer and kitchen staff.

The bill is not the first time the idea of regulating what happens to tips has been proposed. Quebec, New Brunswick, PEI, and California and New York among other U.S. states, ban the practice of employees "sharing" tips with management.

Bill 12 started life as the one-line Bill 49, Protecting Employees' Tips Act, which stated simply, "An employer shall not take any portion of an employee's tips or other gratuities."

First introduced in 2010, the bill has died three times on the order paper. It has also grown to multiple paragraphs in response to consultations with the restaurant industry and employment lawyers.

As it stands, the bill would allow sole proprietors, partners and "shareholders" in a restaurant to share tips if they do much of the same job as waiters. 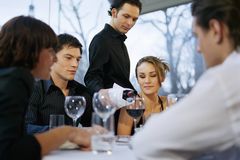