When Jordan Mallon looks around his campsite near the South Saskatchewan River, he sees old farm buildings and country roads. Nearby, the grass-covered prairie gives way to the wind-blasted landscape of the Alberta badlands.

But in his mind's eye, stepping back about 76 million years, he can imagine a very different scene.

"This was beachfront property," said Dr. Mallon, a paleobiologist with the Canadian Museum of Nature in Ottawa.

At the time, he said, this part of Alberta, near the Saskatchewan boundary, was a coastal plain near a shallow, mid-continental sea. Lush vegetation was abundant, as were crocodiles, flying reptiles and even some of our own mammalian ancestors. But dominating the scene would be herds of horned, plant-eating dinosaurs, roaming the landscape in the same way buffalo once covered the prairie.

Dr. Mallon and a small team of his colleagues have come to this area to uncover some lingering glimpses of that prehistoric world. On Sunday, they set up camp near the small town of Hilda, Alta., about 15 minutes from a "bone bed" where it appears that at least a dozen centrosaurs – a type of horned dinosaur with a bony frill and a single rhino-like horn on its nose – all perished together.

"It seems to be from a single event," said Dr. Mallon, who explained that if the fossils had accumulated over a long period of time, they would more likely have included the bones of other species. Instead, the eroding cliffs are yielding only the jumbled bones of centrosaurs of different ages, like a geological snapshot of a group of animals caught up in a sudden cataclysm.

Other clues suggest that the bone bed is merely one section of a much bigger find that stretches across two to three kilometres and may contain the remains of a entire herd of centrosaurs wiped out in one fell swoop.

"We're talking about tens of thousands of individuals dying at once," Dr. Mallon said. "It would have been an epic disaster."

Exactly what killed all those centrosaurs is an open question, but given the much warmer and more volatile climate that prevailed in western North America at that time, it's easy to picture a violent storm surge or a similar severe weather event sweeping in from the nearby sea.

Whatever happened, the outcome was captured for scientists to study today because so much sediment was washing down from the newly formed Rocky Mountains to the west and quickly accumulating in low-lying areas where dinosaurs were abundant.

"You ended up with pretty much the perfect conditions for dinosaurs to be preserved," said Jon Noad, a geologist and consultant based in Calgary who has studied the region.

The area near where Dr. Mallon and his colleagues have set up shop was first identified as a promising site for dinosaur fossils in the 1950s by Wann Langston Jr., a celebrated American paleontologist who was working for the Canadian Museum of Nature at the time. Subsequent work by researchers at the Royal Tyrrell Museum in Drumheller, Alta., reinforced that picture.

In 2013, Dr. Mallon decided to revive the scientific exploration of the region and he has returned every year since then. Last summer, the Ottawa team's persistence paid off with the discovery of the centrosaurus bone bed and, in an older layer of rock, the complete skull of a less common type of horned dinosaur called Chasmosaurus kaiseni. This year, the paleobiologist hopes to extract the skull and have it lifted from the site in a single 1.5-tonne block by helicopter.

And while the chaos of the bone bed may look less dramatic than a single well-preserved skull, it is potentially more useful in revealing the life cycle of horned dinosaurs and their role in a changing environment.

"You can learn about how these animals changed as they grew up, about the differences between males and females. You can learn about the population structure of the herd," he said. "And that's just the tip of the iceberg. We can certainly work this bone bed for years to come." 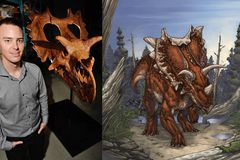 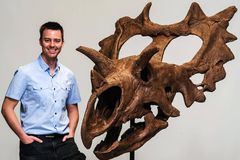 T. Rex would have had lips, Toronto paleontologist says in new research
May 19, 2016 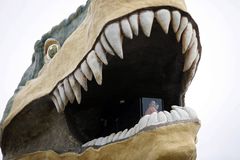