Eight years after it was first urged to do so, the Alberta government has declared grizzly bears to be a "threatened" species - a move critics say is largely inconsequential and does little to protect the animals.

Sustainable Resource Development Minister Mel Knight announced Thursday the government would move the iconic grizzly into the category, meaning it's "a species likely to become endangered if limiting factors are not reversed." There are only about 760 bears left in the province, according to government estimates released this year.

The move "just highlights and heightens the need to continue to work on the conservation of the species," Mr. Knight said.

But much of the procedure that accompanies a "threatened" designation has already been done, including the development of a plan to preserve the population, which was done two years ago. The government has also, in 2006, suspended the once-annual grizzly hunt.

No new conservation funding will be awarded, and no new protection given to the animals, because of the new label.

"What this really is doing is dragging out the process and continuing to fail to take real action," said Rachel Notley, a New Democrat member of the Alberta legislature. "You have to protect the habitat."

Critics say the only way to actually help the grizzly population is to scale back the number of roads, largely used by snowmobile and other recreational riders, reaching into the bears' traditional turf along the province's western edge. The government made vague references Thursday to limiting access but didn't provide specific initiatives.

So, with a plan already complete and the bear population failing to rebound, critics said Thursday's announcement doesn't move the province ahead.

"They've taken all these steps, but what they haven't done is anything that actually helps grizzly bears," said Nigel Douglas, a longtime advocate with the Alberta Wilderness Association.

In his announcement, Mr. Knight acknowledged much of what a government would do to protect a threatened species has already been done, but hinted he'd look at reducing the number of sport trails.

"We have done a tremendous amount of work. Once the recovery program was initiated, many of the things you would do under 'threatened' status have already been completed. But the ongoing work will address the situation with respect to access. There's going to be some more focus put on access," Mr. Knight said.

Pressed by reporters, he said a rancher would still be allowed to shoot a grizzly to protect people, land or livestock, and the government won't take a "heavy hand" to enforcement in such cases.

The minister made the announcement one week after a coalition of environmental groups released a report about the decline in the number grizzlies, which pegged roads and trails as the main culprit. Next to him stood a map marking towns where the government is expanding its "BearSmart" program to help reduce grizzly-human interaction, which often leads to the bear being killed by a vehicle, hunter or wildlife officials. June is Alberta's busiest month for grizzly sightings.

"By and large I do think people really understand that this is a species we want in Alberta," Mr. Knight said.

Alberta's Endangered Species Conservation Committee first recommended labelling the bears as threatened in 2002, two years after it said they were at risk. The grizzly bear hunt was suspended in 2006 and, two years after that, the province published a recovery plan to help restore population numbers.

Mr. Knight estimated the current breeding-age grizzly population of about 350 to 400 bears would have to more than double in size to reach a sustainable level.

The province has budgeted $1-million for its 2010 grizzly management program. Mr. Knight said "there's no indication we're going to withdraw from that" annual figure in future years.

In 2002, the government estimated there were still 1,100 grizzly bears alive in the province. Environmental groups said at the time it was closer to 700. It's unclear whether the current estimate of 760 represents a drop in bear numbers or a more accurate estimate.

"If it's a sign that there's a renewed will to recover them, then that's great news," he said. "We've known for years that grizzly bears are in trouble because there's so much motorized access into grizzly bear habitat. Until we actually deal with accessing grizzly bear habitat, everything else is, I guess, preparation for the actual work." 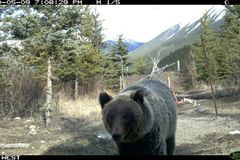 Follow Josh Wingrove on Twitter @josh_wingrove
Report an error
Due to technical reasons, we have temporarily removed commenting from our articles. We hope to have this fixed soon. Thank you for your patience. If you are looking to give feedback on our new site, please send it along to feedback@globeandmail.com. If you want to write a letter to the editor, please forward to letters@globeandmail.com.
Comments