Faced with slumping resource revenues and a growing deficit, Alberta's Progressive Conservative government skipped the traditional Throne Speech upon its return to the Legislature, with Premier Alison Redford suggesting she would rather cut to the chase and deal with the budget.

The province's legislative session resumed on Tuesday after a three-month break. The budget is expected on Thursday, and Ms. Redford said it is the province's top priority, so she extended last year's session into 2013 to allow her to dispense with the formalities. "These are challenging times for Alberta. We need to focus on our fiscal situation, and it's important for us to carry on the work that we started last year," the Premier said.

It all leaves observers, including opposition parties, flying blind. A Throne Speech typically lays out priorities of a session – Ms. Redford had two last year, before and after the spring election. To skip it by simply extending the previous year's legislative session is unusual.

The last calendar year in which Alberta did not have a Speech from the Throne was 1912. Ms. Redford's party argued there's little point with all eyes on the budget. "Everybody knows what the session is about," Government House Leader Dave Hancock said.

Aside from bucking tradition, however, critics say Ms. Redford is undermining her opponents – at a time when her poll numbers are sinking. Without a Throne Speech, she avoids having to tip her hand about her plans for the upcoming months to opposition researchers, meaning they will not be able to get a head start on responses to policies. It also means the opposition will be denied the public attention afforded by replying to the speech.

"She's taken away every opposition party's ability to criticize that plan and lay out their own plan. It takes away the air time," Liberal House Leader Laurie Blakeman said.

With little new to discuss on Tuesday in the first Question Period of the year, debate picked up where it left off – with Ms. Redford sparring with her top rival, Wildrose Leader Danielle Smith.

Because of the budget woes, Ms. Redford has suggested she'll have to backtrack on spending promises made during, and since, last year's election. But she also plans to keep spending on infrastructure, avoid deep cuts and immediate tax hikes, and plan for the future. "How can all of this be possible?" Ms. Smith asked in the House, after earlier telling the Premier, "Don't promise what you can't deliver."

"Anyone who actually understands how an economy works understands it's a heck of a lot more complicated than that," Ms. Redford retorted, later adding: "You know what else hasn't changed since the last session? The tone from the opposition."

Ms. Redford declined on Tuesday to give a glimpse of her budget plans, saying only, "We know we can drive this province forward. That's exactly what we're going to do when we table the budget on Thursday."

The exchanges led to few answers, only thundering applause from each leader's backbenches. Government didn't table any bills, making only one small announcement – people in continuing care will be bathed a minimum of twice a week. Last year, revelations that some seniors were being bathed only once a week dogged the government.

Ms. Smith said Ms. Redford's legislative agenda is thin for a Premier one year removed from an election win. "She laid out a lot of promises during the campaign. She campaigned on a lot of things during the [2011] PC leadership. You would expect to see some substantive legislation, and the fact that she doesn't have any raises questions about why not," Ms. Smith said.

New Democrat Leader Brian Mason said Ms. Redford is backtracking on the social-programming promises that won her support from non-conservatives.

"It's very clear that she's unable or unwilling to deliver on those promises. So those people are abandoning her, as rightly they should, because quite frankly they were lied to in the election," Mr. Mason said.

The sitting is scheduled to run until June. 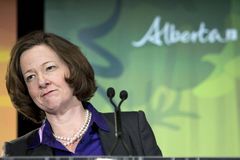