The Alberta Liberals have released a document that they say outlines the Progressive Conservative government's plans for greater health care privatization as well as a political strategy for bringing those changes in.

"This shows clear evidence that the government is entertaining notions of private insurance, a two-tiered system, and a move that we believe is going to undermine the very foundations of the Canada Health Act," said Opposition Liberal Leader David Swann.

The document on government stationery is dated July 12 and appears to prescribe a series of reforms to health care in the province.

The first phase describes building public confidence through a series of public consultations, reporting and inspections.

Phase two contemplates changes that would likely be highly controversial, such as allowing medical professionals to work in both the public and private system at the same time. The document describes a "policy shift" that would "allow government the flexibility to regulate health provider commitment in the public system."

"New legislation will enable government to consider benefit models that go further than the current, narrow scope and explore other funding models (eg; insurance and cost-savings accounts)," it says.

MLA Raj Sherman, who was suspended from the Tory caucus last week after he criticized his party over health care reform, said he saw the document at a cabinet policy committee for health.

"This was introduced by (MLA) Fred Horne in caucus as phase one and phase two," Mr. Sherman said. "My understanding is that phase two is coming after the next election.

"I said, 'Whoa - minister, this is the Third Way,"' Mr. Sherman said, referring to a series of proposed reforms under former premier Ralph Klein that were withdrawn after public protest.

"This is basically privatizing health care."

Health Minister Gene Zwozdesky acknowledged the document was genuine. But he said that it was a summary of feedback that Mr. Horne received as he was leading a round of public consultation on health care, not a description of policy or strategy.

"There's absolutely no agenda to privatization whatsoever," Mr. Zwozdesky said. "Let's be clear about that."

Mr. Horne has denied authorship of the document.

Mr. Zwozdesky pointed out that the proposed Alberta Health Act now before the legislature contains guarantees of public consultation before any major changes are made to health care.

"It's the first time I've seen in print from this government any evidence that they're considering this private approach to health care. They've actually got a plan."

"This document is in fact the smoking gun," he said. "This is the proof of what we've been saying for so many years, which is that you can't trust the Progressive Conservative government with our health care system."

Meanwhile, that system took another shock Monday when a fourth member of the board that runs its day-to-day operations stepped down over concerns the health minister was encroaching on its responsibilities.

Three other members resigned following the termination of board CEO Stephen Duckett, whose contract was ended after what members described as clear direction from Mr. Zwozdesky.

Mr. Zwozdesky maintains the board will continue to function and that health services won't be disrupted.

"(The board is) responsible to the minister of heath and I am the one responsible and accountable for health services," he said.

"From time to time you will find that ministers will have to provide some direction. And that's what I'm doing." 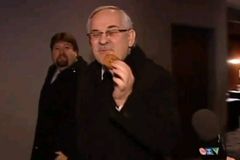 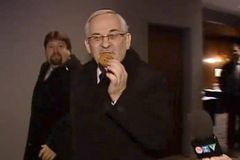 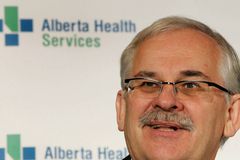 The cookie crumbles, the doctor is cast out
November 23, 2010
Follow us on Twitter @globeandmail Opens in a new window
Report an error
Due to technical reasons, we have temporarily removed commenting from our articles. We hope to have this fixed soon. Thank you for your patience. If you are looking to give feedback on our new site, please send it along to feedback@globeandmail.com. If you want to write a letter to the editor, please forward to letters@globeandmail.com.
Comments