A wave of fentanyl deaths across Alberta is creating a public health crisis, according to health authorities and police officers, who say they have never encountered a drug as deadly as the fast-acting opioid.

In the first half of 2015, 145 Albertans died from fentanyl, far outpacing the number of deaths in previous years. According to police in Calgary and Edmonton, the rate at which officers have responded to overdoses since then has only accelerated and shows no sign of abating.

Staff Sergeant Martin Schiavetta, the head of the Calgary police drug unit, said that over the past year, his officers have responded to overdose victims across Calgary – from the inner city to the outer suburbs. The youngest victim so far was 15 years old. In the past month alone, the city's police force has responded to 26 overdoses.

"This is the worst drug I've seen in my career," said Staff Sgt. Schiavetta, who can't mask the frustration in his voice when he talks about fentanyl. "This is absolutely the worst drug I've ever seen because of how toxic it is. The equivalent of two grains of sand will kill you, quickly."

Fentanyl is a cheap and powerful drug, 50 times more potent than heroin. It's easy to manufacture and is toxic in small doses – two milligrams are enough to kill the average person in less than 15 minutes. The drug's spread across Western Canada has coincided with a slowdown in the oil and gas sector that has seen thousands of people lose their jobs.

"The graph for deaths related to fentanyl just goes straight up, it's just a huge rise," said Edmonton Police Detective Guy Pilon. "I don't think we've come anywhere near the peak of this yet."

After years of falling crime rates in Calgary and Edmonton, both cities have experienced spikes in violent crime over the past year. Along with the slowdown in the provincial economy due to depressed oil prices, Staff Sgt. Schiavetta says fentanyl is to blame. Calgary police have linked 40 per cent of bank robberies over the summer to fentanyl addiction.

"We have a public health crisis in our community with fentanyl. It's just frustrating. We are losing so many people in Alberta at the prime of their life to a drug that is so addictive," the 19-year police veteran said.

The provincial health service has activated an emergency command centre to respond to fentanyl and has allocated $300,000 for dispensing kits with an antidote known as naloxone. While Dr. Ada Bennett, Alberta's acting chief medical officer, couldn't reveal how many of the kits have been distributed so far, she said the province is encouraging the families of opioid users to order the kits from health providers.

"It's a sad situation because we know that so many of the victims are young people," Dr. Bennett said. "We want people to know that fentanyl is dangerous. People need to know that one pill is enough to cause an overdose. If you are going to do the drug, it is best to have someone nearby so that they can help out."

But there are limitations to the strategy. Fentanyl isn't a party drug, and Staff Sgt. Schiavetta warns that most people who use fentanyl do so alone. The drug lowers respiratory and heart rates quickly while causing users to drift in and out of consciousness, meaning that someone who is experiencing an overdose typically cannot self-administer naloxone.

Health authorities have asked the federal government to make naloxone available over the counter, while policing agencies have requested federal rules to regulate the purchase of commercial pill-presses required to produce fentanyl.

Calgary police officers have sent accounts of the current situation to Alberta's Justice Minister. The force has also created eight stark posters warning Calgarians about fentanyl. However, without a dedicated advertising budget, Calgary police haven't been able to post the warnings in public.

Alberta Justice Minister Kathleen Ganley faced daily questions last week in the provincial legislature about her office's limited reply to fentanyl. After telling MLAs on Monday that provincial police chiefs were happy with her support, she told the legislature at the end of the week she had met with the province's police chiefs to discuss the situation.

When asked by The Globe and Mail whether Ms. Ganley was working on a strategy to combat fentanyl, her office responded by e-mail that she "continues to monitor the fentanyl situation." 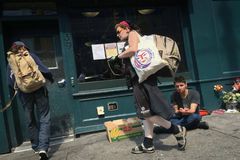 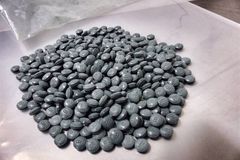 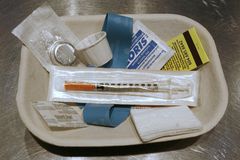