Jim Prentice's voice cracked moments after he took responsibility for an election loss that stunned Canada and has led many to question whether Alberta's Progressive Conservative Party can ever recover.

"I am sorry I let you down as your leader," Mr. Prentice said on Thursday night in Calgary during a gloomy speech to party supporters that is likely to be his last as Premier. "I will carry those decisions and the electoral consequences of it for the rest of my life."

He had been Premier only seven months when he called an early election that humbled what was once one of the most dominant forces in Canadian politics. The Tories had held power with little opposition for 44 years. They lost 60 of their 70 seats, dropped to third-party status and watched their leader resign as Rachel Notley's NDP swept the province.

In his first appearance since his concession speech on May 5, the departing Premier stuck to his script from the election. He said he needed an early election to get the "moral authority" from Albertans to push through his austerity plan – despite polls showing most Albertans rejecting the early election call, the austerity plan and Mr. Prentice.

"We have all been humbled by the decisiveness of [the electorate's] decision," he said. "I made mistakes. And there can be no doubt that 44 years was indeed a long time. However, the sun will shine again."

Ric McIver, elected on Monday to serve as the party's interim leader, warned that a tough rebuild was ahead for the party. Mr. McIver, who had been the labour minister, also took aim at his predecessor moments after he walked off the stage. "At times we were arrogant and complacent. And sometimes we forgot to apologize like we meant it."

He said the party was "too quick to blame others" – an apparent reference to a statement Mr. Prentice made on a radio program in early March, when he said Albertans only had to "look in a mirror" to understand why the province was facing a budget deficit.

"No one has a divine right to govern," Mr. McIver continued. "Many of the people who can determine whether this is a four-year misconduct or a lifetime expulsion [for the PC party] are in this room today."

The Tory party says it sold 1,550 tickets, mostly before the vote, for the Calgary reception. Only 208 coats and umbrellas were checked on the rainy night; however, as many as 1,000 may have been in attendance, party staff said. The annual dinner was once a highlight of the city's social calendar and most in attendance on Thursday were drawn from corporate Calgary.

The PCs had considered cancelling the $500-a-plate fundraiser after their electoral disaster. Requests for refunds were rejected. In the end, the dinner was transformed into a reception that was largely standing tables and finger foods.

"I've supported the party in the past, but it's a bit like looking at a car crash; you can't take your eyes off it," said Al Block as he mingled with others at the downtown event. "Someone said to me earlier this evening, 'You're going to the funeral tonight.' I should have worn black."

Winston Gaskin said he's a long-time Tory, but conceded the cancellation of a golf game helped explain why he was at the reception. "I've never been part of a rebuild that isn't difficult, but there's an opportunity for the Tories going forward," he said.

While the mood was sombre, both Mr. Prentice and Mr. McIver said they believed the party could rebuild. The interim leader's decision not to spare the outgoing Premier from criticism was seen as proof by some that the Tory party might be ready to ask tough questions.

"We're going to need to make serious decisions. The party's tent may have grown a little too large," said Thomas Lukaszuk, a departing Edmonton-area MLA and former deputy premier. "The only dessert that should be served after dinner here is humble pie."

The morning after Mr. Prentice apologized for the historic defeat, nearly all of the party's staffers were fired. A committee of the party's board of directors relayed the news to the 12 staff members early Friday morning, although many present at the fundraiser on Thursday were aware the axe was coming. One staff member will remain on.

"It's a tough day for us, there are a lot of emotions," said past PC president Bill Smith. "But we have to ensure that our cash flow is sufficient to meet our obligations."

Kelley Charlebois, the party's executive director, is among those who lost their jobs.

The party has offices in Edmonton and Calgary, with staff in each, but Mr. Smith says that setup can't continue. The party still has bills and donations arriving in the mail after a month-long election campaign, and its financial picture won't be clear until the end of the month.

On Thursday night, many of the well-heeled at the Calgary convention centre were trying to figure out where the party had stumbled.

It may have been the instability of four premiers in five years, or the party's inability to balance the budget in good economic times. It could have been former premier Alison Redford's scandals over office and travel expenses, or the mass floor crossing of Wildrose MLAs last December that decapitated the Official Opposition. Or maybe it was Mr. Prentice's bad-news budget and his willingness to hike taxes on everyone except corporations.

Thursday's turnout was an

improvement from election night, where only a few dozen supporters made their way to PC headquarters to watch as the party's ministers and MLAs fell one by one.

After a 28-day campaign in which the long-governing party struggled to gain any traction in polls, the mood was grim on May 5 as an Orange Wave rolled over Alberta. For decades the hall would have been packed with agenda-setters. But as Mr. Prentice worked in a backroom on his concession speech, packs of electoral posters remained wrapped in plastic and bags of balloons sat unopened – there just weren't enough supporters around.

As Mr. Prentice took to the stage to concede, he saw rows of unoccupied seats. Those in the front marked "reserved" remained largely empty.

Alone on the stage in a sparse hall, Mr. Prentice resigned as party leader and as an MLA, cementing a result that had seemed unimaginable for decades. The New Democrats were now in charge of Alberta, winning 54 seats.

Opinion
Time to rebuild conservatism in Alberta
May 14, 2015 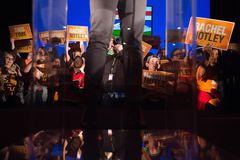