Days after a deadly shooting in Toronto sparked a debate over police use of force, Alberta's police watchdog is looking into three separate incidents that saw officers use their firearms or a Taser.

The latest incident in Alberta happened Saturday night when police say an officer with the Wetaskiwin RCMP detachment pulled over a suspected impaired driver near Ma Me O Beach, south of Edmonton.

RCMP say there was an altercation and the officer shot two men who were in the car.

On Friday, RCMP used a Taser on a 27-year-old man during an arrest in Leduc, Alta. The man died Sunday morning.

On Thursday, RCMP in Grande Cache shot and wounded a man who has since been identified by family as Curtis Hallock, a regular character on the reality TV show Mantracker.

The Alberta Serious Incident Response Team, which reviews incidents involving police that result in death or serious injury, is conducting independent investigations into all three incidents.

The head of the agency cautioned about reading too much into the incidents when asked by a reporter whether the public should question its confidence in police.

"I don't think generally speaking the public needs to be concerned about being stopped," Clifton Purvis told a news conference on Sunday.

"In fact, I think probably in Canada we're one of the very few jurisdictions worldwide where your first reaction when you get pulled over by police isn't fear, it's 'Oh gosh, I got a ticket.' " The debate over how much force police should use was propelled into the national spotlight last week after the fatal shooting of Sammy Yatim, 18, in Toronto last month. Yatim died after being shot by police aboard an empty Toronto streetcar he had cleared out by brandishing a knife.

Video of the incident has been viewed by many people online and his death has sparked protests and prompted an online petition calling for criminal charges to be filed against the officer who fired the shots. The officer was suspended and the case is being reviewed by an independent agency.

Purvis said Saturday's incident began when an RCMP officer who was alone in a marked police cruiser pulled over a vehicle with five males inside on suspicion the driver might be impaired.

Purvis said that while the officer while arresting one of the males, an altercation occurred with the other four, and that the officer shot two members of the group.

One male was pronounced dead at the scene and the other was taken to hospital. The remaining males were taken into custody.

"Because this is an ongoing investigation, and it is still in its very early stages, I cannot comment further at this time in relation to the circumstances of that incident," Purvis said.

RCMP said the man who they used a Taser on during the arrest Friday was a suspect in a series of assaults, theft of automobiles, driving complaints and hit-and-runs. They said they stopped him at a gas station, but they said there was a physical confrontation and that's when the Taser was used.

Mounties said he was then handcuffed but went into medical distress and was transported to hospital in Edmonton in life-threatening condition before dying on Sunday.

Purvis said his team isn't linking the use of the weapon with the man's death.

"There will be an autopsy conducted on that male later this week, and it's hoped the results of the autopsy will confirm the cause of death," Purvis said.

The identities of the men who died have not been released.

Purvis also said he couldn't provide much detail about the shooting Thursday near Grande Cache, since he said a suspect is facing charges, though he didn't know if they have been formally laid.

RCMP have released few details about the shooting, but they have said two officers were trying to pull over a suspected impaired driver when a confrontation ensued and a man was shot.

He fled, but was caught a short time later and taken to the local hospital.

A relative said Friday that Curtis Hallock was shot in the leg and arm.

Mantracker airs on the Outdoor Life Network and features an expert tracker and his sidekick on horseback who pursue two contestants in the remote wilderness.

Purvis said the police vehicle at the shooting Saturday was equipped with a video camera and his investigators hoped the recording would assist them.

Purvis also said there was cellphone video and a number of witnesses to the incident with the Taser in Leduc and is hoping they will contact his team, and he noted that forensic investigators with his team were at the location of Thursday's shooting near Grande Cache.

Results, he said, will take time. 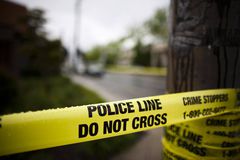