The car loaded, Un Ho Choi, his wife Christine and 15-year-old son Danny will wave farewell to the city and battle traffic early Saturday morning to reach their coveted campground along Lake Erie. Among their personal firsts: nights spent in a tent, roasting marshmallows over a campfire and covering themselves with mosquito repellant.

"I really want an understanding of the Canadian culture and to enjoy this good country," said Mr. Choi of his first camping adventure, only three months after moving from Korea to Canada and into his home in Oakville, Ont.

Parks across the country are hanging high hopes on families like the Chois. Facing dwindling attendance, park officials want to draw new Canadians and children of urban families into the great outdoors. And the demand is there - new programs that gently ease fledgling campers into the experience have had a positive response, inducting newcomers into the quintessentially Canadian world of canoes, sleeping bags and black flies.

The number of visitors to Canada's national parks has dropped 22 per cent from 1995, while the country's population has increased nearly 18 per cent - prompting Parks Canada to ask why. One realization: Not enough attention has been paid to the needs of the nation's transforming demographic.

Your camping and cottage photos Roughing it this summer? Share your best images

"We have to change with it," Ms. Wilson said. "We have to understand better what type of equipment people need, what type of instruction, what language they need to communicate in, how to package the programs on the Web."

Using information gleaned from focus groups, Parks Canada is "working with what we've heard from current visitors and potential visitors, what they define as camping, and that's not always as rustic as sleeping in a canoe under the stars, which is maybe what we saw 30 years ago," said Ms. Wilson. Some, she added, "are looking for something safer. That's definitely what we've heard from new Canadians. They want to explore, but sometimes in a more bounded kind of way."

Parks Canada is setting up new pilot projects to address the issue. Some parks are offering alternative styles of accommodation (such as yurts and teepees), "all-inclusive" turnkey camp experiences (No cooler? No problem), and learn-to-camp tutorials. One camp in Manitoba organized trips to introduce target groups to traditional Canadian camping.

At the same time, new Canadians are adding their own twist to the Canadian camping experience. Vivek Shetty and his wife, Rashna, who moved from India to Mississauga, Ont., in 2008, left late Friday to reach their pristine campground on the southern shores of Lake Simcoe. But when the Shetty family gathers for mealtime, it won't be an intimate gathering around the campfire, cooking hot dogs. Fifteen other relatives and friends will join them at Sibbald Point Provincial Park for traditional Indian meals - chicken curry, rice and naan.

"I've been told that it is fun," Mr. Shetty said of his first camping trip. "I like adventure so I would like to explore."

The Mohanraj family, with their nine-year-old daughter, Oviya, were so taken by their camping experience over the Canada Day long weekend that they're leaving for Tobermory on Saturday, with seven other families. They bought a bigger tent this time (a six- to eight-person one), and along with the hamburgers, hot dogs and corn, they'll also pack tandoori chicken and curry.

"If I told my parents about camping they would say, 'Why are you paying to sleep on the pavement and on the grass?' They think I am crazy," said Ramachandrarajah Mohanraj, who arrived from India in 2003 and now lives in Scarborough, Ont. "But we really enjoy camping."

Last weekend, Andreas Ruvio, who arrived in Canada from Colombia nearly three years ago, was one of more than 40 new Canadians invited to visit Riding Mountain National Park, outside Brandon, Man. Although this was Mr. Ruvio's second time camping in Canada, for more than half of the visitors it was a first. The trip was an outreach activity organized by Mark Young, the park's aboriginal affairs manager who had been watching an influx of immigrants coming through a workers program run by Brandon's Maple Leaf plant.

"I thought, why not schedule a bus and bring people from the plant out, give them an overview of the park. [Last year's]trip was booked up in half an hour," he said. This year, the response to the overnight trip was even greater.

Georgian Bay Islands National Park in Ontario is in its second year of offering a program called all-inclusive camping. Last fall, the program ran at about half its capacity, and this year there's already a waiting list for the six tents available on four weekends in the fall.

"We were looking for a way to have people come in and enjoy the park in a way they're comfortable with," said Victoria Evans, the park's interpretation co-ordinator.

The all-inclusive packages include parking in Honey Harbour, the boat fare to get across to the campground on Beausoleil Island, a roomy tent, a table, chairs, two inflatable cots and Therma-rest sleeping pads, a fully equipped shared camp kitchen and the first night's dinner. Park staff are on hand at all times to lead guided tours and to answer any questions: Ms. Evans said most people want to know how to start a campfire - and about bears and snakes.

Jasper National Park is in its first summer of offering three "cottage tents," which come with an optional one-hour "Camp 101" tutorial. "We wanted to find a way to reach people not comfortable with [traditional]tents," said Gloria Keys-Brady, the park's interpretation co-ordinator. "And we decided to also give [people]a program about how to set up a campsite, build a fire, set up food lockers, use a gas stove …"

At the start of the summer the interest was slow to build, Ms. Keys-Brady said, with people booking only one- or two-night stays on weekends. But from mid-July until after the Labour Day weekend the cottage tents are all fully booked.

At other parks across Canada, the alternative accommodations aren't quite so all-inclusive: Most include only a structure and leave it to visitors to bring all their own equipment. Forillon National Park in Quebec, for example, offers three basic yurts, and Waterton Lakes National Park in Alberta put in five teepees this year. Bruce Peninsula National Park in Ontario and the Bay of Fundy National Park in Nova Scotia are all planning yurts for next year. And Ms. Wilson said there are more trial projects to come, including ready-to-go tent trailers.

"On an agency-wide level we have to figure out how to do this better, so we reverse the declining trend and get better at meeting the needs of people who come," Ms. Wilson said. "We were doing it well 20 years ago, but needs changed and we didn't. There's no better way to get people to connect to their national parks than to have them stay overnight."

Lisa Paul is special to The Globe and Mail 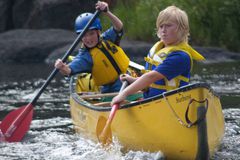