As her husband became incapacitated by Parkinson's disease in his final years, Maureen Pickering became his dedicated caregiver and advocate.

After his death, as she struggled with Alzheimer's, Ms. Pickering, who didn't have children, moved to the Caressant Care nursing home in Woodstock. She died on March 28, 2014, at 78, and her funeral notice made a point of thanking the staff "for their wonderful care."

Her last moments are now under scrutiny with police alleging she and seven other elderly people didn't die naturally, but were drugged to death by a registered nurse.

Before they suddenly shared a common label as alleged murder victims, the eight had led diverse, busy lives in their corner of southwest Ontario.

They had been war veterans. They had been active in their communities. There were entrepreneurs and housewives and a factory foreman. Some had no children, while another had six kids.

Seven of them died at the Caressant home in Woodstock while the last one died at Meadow Park home in London. For years, their relatives were unaware that their grief might have had a common cause.

The first suspicious death was that of James Lancing Silcox, who was 84 when he died on Sunday, Aug. 12, 2007.

His children assumed it was from natural causes – their father was sickly, suffering from Alzheimer's, diabetes and a recently replaced hip.

"When someone that old passes away, you just assume it's something natural," said son-in-law Glen Smith.

He said Mr. Silcox was a well-rounded man: a Second World War veteran who rode motorcycles in Italy and North Africa, a long-time tool and die foreman at Standard Tube in Woodstock, a handyman who "was always doing little things and inventing little things," a doting dog owner and a loving paterfamilias.

He had been married to his wife, Agnes, for 64 years.

"I just thought it was his illness," his daughter Connie Dreyer said Tuesday, wiping tears from her eyes. She said her 84-year-old father had pancreatic cancer.

Mr. Granat loved working on engines and doing auto-body work on cars. "He was a tinkerer of all things," said his long-time friend Sam Lamb. "He would fix anything."

Mr. Lamb often visited Mr. Granat in his small shop in Tillsonburg, a half-hour drive south of Woodstock, where he would work on his projects while smoking cigarettes he had rolled himself.

"He was a real nice, happy-go-lucky guy, very easy to get along with," said Mr. Lamb, a retired foreman and truck driver.

Mr. Granat lived by himself in a flat close to his shop. When he lost the apartment, he took to sleeping on a cot in the shop, Mr. Lamb recalled.

One of Mr. Granat's granddaughters, who did not want to be named, said she was angry to learn that his death was an alleged murder. "He was a good person. Every time with him was special."

She was a long-time member of Knox Presbyterian Church in Woodstock as well as other community groups.

Born in Nova Scotia, she was the mother of two and her husband had passed away 14 years before her.

A widow, Ms. Matheson lived on her own with help from her son until she became frail and began getting confused and moved to the Caressant home.

She had been a lifelong member of the United Church in her village of Innerkip, about a 15-minute drive from Woodstock. She served on several committees and was a driving force of the women's group, helping with fundraisers and serving lunches at funerals.

"She was kind and gentle, petite, well-respected, a long-time presence in the village," said Rev. Maya Landell, minister of the Innerkip United Church.

Days later, there was another death. Mary Zurawinski was the oldest victim. She was 96 when she died at the Caressant home in Woodstock on Monday, Nov. 7, 2011.

According to the charge sheet filed at the local courthouse, Ms. Wettlaufer is alleged to have administered the drug that killed Ms. Zurawinski some time between Sunday and Monday.

Born in Edinburgh, she had served in the Royal Air Force during the Second World War. It was in London that she met a Canadian soldier, Peter (Sandy) Young.

They married and moved to Calgary before settling in Woodstock. In the funeral notice, her niece, Sharon, described her as a "true sturdy Scottish lass, who did not hesitate to speak her mind on any and all subjects."

As for Ms. Pickering, the notice thanked "the caring and patient staff of Caressant."

"She was a really warm, loving person, a really wonderful woman. It's troubling that someone did this to her," said a family friend who did not want to be named.

The friend said Ms. Pickering had taken care of her ailing husband, Hubert, a former Bell Canada manager. They travelled despite his Parkinson's. "She tried to make his life as fulfilling as possible."

Mr. Horvath, who once ran a tool and die company in London, was a big trophy hunter.

Taxidermist Laurier Houle said Mr. Horvath had a room full of stuffed animals that he had shot during his travels around the world. Mr. Horvath and his late brother Frank came to Canada after the Hungarian revolution, Mr. Houle said.

For 29 years, he was the head of the Hungarian Club of London.

Mr. Houle said Mr. Horvath's death had not raised doubts because he suffered several strokes and had Alzheimer's.

With reports from Eric Andrew-Gee in Woodstock, Ont., Rick Cash and Stephanie Chambers

Former nurse stands accused of being one of Canada’s most prolific serial killers
October 25, 2016
Friends of former Ontario nurse charged with murder stunned by allegations
October 25, 2016 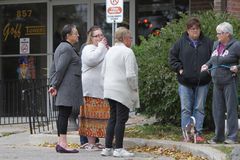 A history of nurses charged with killing patients
October 25, 2016
Follow Tu Thanh Ha, Jill Mahoney and Colin Freeze on Twitter @TuThanhHa @jillsmahoney @colinfreeze
Report an error Editorial code of conduct
Due to technical reasons, we have temporarily removed commenting from our articles. We hope to have this fixed soon. Thank you for your patience. If you are looking to give feedback on our new site, please send it along to feedback@globeandmail.com. If you want to write a letter to the editor, please forward to letters@globeandmail.com.
Comments are closed