As the world digests the latest news of atrocities against women – the gang rape of a Swiss tourist in India, the shooting death of South African model Reeva Steenkamp, the missing aboriginal women here in Canada, the rape of an inebriated Ohio teenager by two football players – award-winning Canadian journalist and former member of the UN's International Women's Commission Sally Armstrong sat down with The Globe and Mail editorial board. Just over a decade since the release of her acclaimed book, Veiled Threat: The Hidden Power of the Women of Afghanistan, Ms. Armstrong discussed her new book, Ascent of Women, and explained why she sees a brighter future for women in countries near and far.

On what has changed in her 25 years covering women in conflict zones:

Probably about three years ago, I began to see the earth shifting. I began to see the curtain lifting. Why did that happen? There's an increase in education, but mostly there's an increase in talk. I've always felt that if you can't talk about it, you can't change it. When you talk, you start asking questions you never asked before. Women are now saying, "Show me where it's written in the Koran that my daughter can't go to school."

On what sparked her to write the book:

I was doing a story about a group from Canada who went to meet with women in Kenya, Malawi and Ghana and started a thing called Three to Be Free. They wanted to change the law against marital rape. The women in Kenya have almost no rights when it comes to sexuality. It was in writing that [piece] that I came across the story that really made me decide to go ahead with this book: The story of 160 little girls in Kenya who are suing their government for failing to protect them from being raped. The case went to court on Oct. 11. [The decision] has been postponed until April 30.

On Malala Yousafzai, the Pakistani activist attacked by the Taliban for promoting girls' education:

The Malala story would never have hit the paper two years ago because it wouldn't have even left the village. She's become the world's daughter. For so many years, including in India and South Africa, we looked the other way because the thugs in power would say, "It's not your culture. It's none of your business." We were politically correct and we backed off. But it is our business.

On the recent rapes in India:

What [the high-profile December 2012 gang rape aboard a Delhi bus] did was rip the lid off 50 years of secrecy. It's such a huge black eye for India. The world is on their neck and their own women are on the street.

On what western leaders can do:

During the G20 summit in [2009] in Strasbourg, President Hamid Karzai from Afghanistan announced to the G20 leaders that he had just signed Shia family law, which clawed back the rights that Shia women gained in Afghanistan. According to the Guardian newspaper in Britain, Prime Minister Stephen Harper said, "If you support that, I can't support you." Within 20 minutes, all of the other G20 leaders stood in the same line in the sand. In a nanosecond after that, Karzai backed down. The most important thing western countries can do is speak back.

On the new Pope and the church's exclusion of women from leadership:

I don't feel qualified to speak about why millions and millions of high-paid, well-qualified, wonderfully educated people follow a religion that refuses to see women as equals.

On how her book fits into all the chatter about the "end of men" and the so-called death of feminism:

Condensed and edited for length and clarity.

Malala resumes her studies in Britain
May 11, 2018 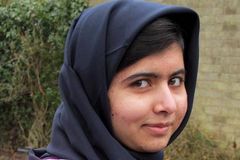 India shocked by another gang rape, this time a Swiss tourist
May 11, 2018