The first use of chemical weapons on a battlefield took place 100 years ago in Ypres, Belgium, on April 22. Chlorine was released from pressurized canisters and, aided by the wind, caused insufferable pain and eventual death among Allied troops in the First World War.

What followed was a cycle of chemical warfare used by both sides, and a century in which governments and scientists made even deadlier weapons of mass destruction – not just chemical, but nuclear and biological. Here is a brief look at the pursuit of such weapons – the catastrophic events, the victims, those who fought to ban them and how WMDs entered popular culture.

Also: One hundred years ago this week, a weapon of mass destruction was used for the first time, writes Doug Saunders

An allied correspondent stands in the rubble of what had once been a movie theater in Hiroshima, Japan, Sept. 8, 1945, one month after the first atomic bomb was dropped. (AP Photo)

German Chemist, Professor Fritz Haber, who has been honored by the Association for Chemical Industry in England posing July 17, 1931. (AP Photo)

German scientist Fritz Haber’s experiments put the use of poisonous gases to deadly effect on the battlefield during the First World War. Relying on the wind to carry gases over fields and across enemy lines could be imprecise. Mr. Haber’s idea was to load chlorine – widely used in German industry and manufacturing – into shells. German generals resisted the idea of poisoning enemy troops, but Haber argued that the use of gas could end the war and save lives. Instead, the war dragged on and other deadly gases were introduced, such as phosgene and sulfur mustard.

Creator of the gas mask 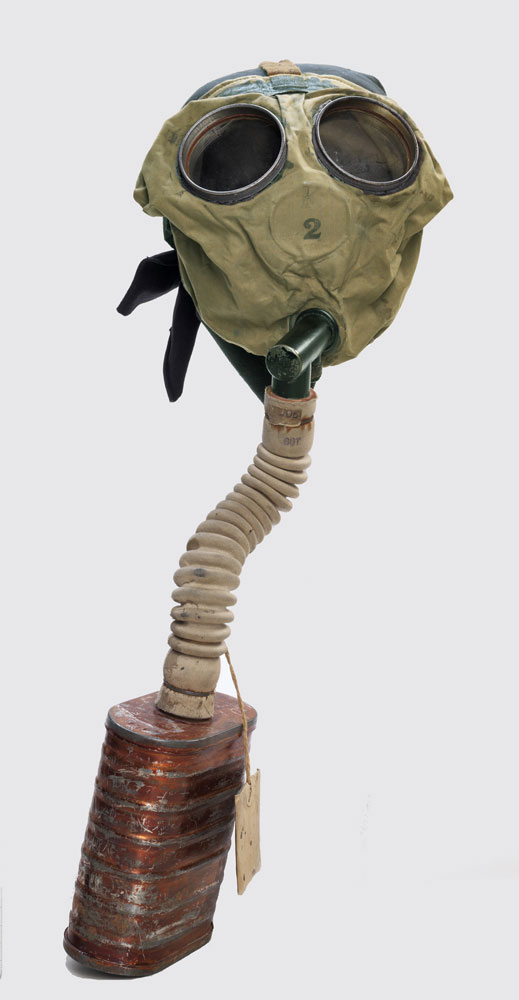 Cluny Macpherson, a medical officer with the 1st Newfoundland Regiment, had a simple idea to combat the Germans’ poison: He took the helmet of a captured German soldier and attached a canvas hood with see-through eyepieces and a breathing tube. The helmet could be soaked with chemicals that absorbed chlorine gas. The Newfoundlander’s invention was recognized as saving thousands of lives.

On Aug. 6, 1945, a U.S. plane dropped the world’s first atomic bomb on the Japanese city of Hiroshima. The bomb, dubbed Little Boy, obliterated nearly 10 square kilometres and killed an estimated 66,000 instantly. Three days later, the U.S. dropped a second bomb, Fat Man, on Nagasaki, killing an estimated 40,000. Japan would unconditionally surrender later the same month, and by year’s end many thousands more had died from the atomic attacks.

U.S. president Harry Truman saw in the science that led to the atomic bomb the hope of a new energy source. But in the decades that followed, it was the nuclear weapons race that dominated.

The 1980-1988 war between Iran and Iraq saw one of the most significant battlefield use of chemical weapons since the First World War. Iraq began using mustard gas as early as 1983 and sometimes put its own troops at risk. Iran claims that it suffered tens of thousands of chemical weapons-related casualties.

In 1988, Iraqi jets dropped bombs mixed with mustard gas and nerve agents on the town of Halabja. Iraq was aiming to retake the town from Kurdish rebels. The chemical weapons attack killed an estimated 5,000 people, many of them women and children.

A U.S. military intelligence report gives details about how, in one instance, Iraqi troops used chemical weapons in an attack against Iranian forces holding a mountaintop position – and not realizing that mustard gas is heavier than air. “The Iraqis discovered this as they attempted to counterattack up the mountain only to be met and overwhelmed by their own weapon,” the report states.

Hydrogen cyanide was used to fumigate California fruit trees against the threat of insects. In the First World War, it appeared on the battlefield as the French tried to use it as a poison gas – with little success.

Research into pesticide gases would continue after the war. Agriculture was the focus, and German researchers made significant strides. One insecticide developed in the 1920s, with the help of scientists connected to Fritz Haber, would later be used to horrific effect: Zyklon B, a type of hydrogen cyanide, was used by Nazi Germany in the gas chambers.

The foremost officer, saluting is Lieutenant General Shigeru Honjo commander in chief of the Japanese forces in Manchuria, acknowledging the salutes of a procession of Japanese residents of Mukden celebrating the Establishment of a new nominally Independent State of Manchuria, Mukden on March 12, 1932. (AP Photo)

Japanese soldiers occupying northeast China before and during the Second World War carried out a clandestine program of biological warfare by attempting to spread infections and toxins over a large population.

When Unit 731 wasn’t infecting and studying the spread of disease among prisoners, it was targeting the general population. Wells were intentionally poisoned to spread cholera and typhoid, and planes dropped porcelain bombs filled with plague-infested fleas.

A U.N. chemical weapons expert, wearing a gas mask, holds a plastic bag containing samples from one of the sites of an alleged chemical weapons attack in the Ain Tarma neighbourhood of Damascus in this August 29, 2013 file photo. (Reuters)

Syria is the latest battlefront where chemical weapons have played a significant part. Chlorine and sarin nerve-gas attacks going back to March, 2013, have killed more 1,000 Syrians and brought swift international condemnation and the threat of U.S. air strikes.

In September, 2013, Syria agreed to hand over its chemical stockpiles. This was a complicated undertaking: The chemicals were carried by truck to a Syrian port, loaded onto Norwegian and Danish ships, shipped to Italy and transferred to a U.S. Navy-leased vessel, MV Cape Ray, which sailed out to find a safe place to dispose of the chemicals with mobile hydrolysis units. The process of destroying 600 tons of sulfur mustard and sarin-gas precursors was completed in August, 2014.

But the destruction of Syria’s chemical weapons program is not yet finished – one of 12 facilities has so far been destroyed. And on the ground, the threat of chemical weapons persists; video of a chlorine gas attack in March in northwest Syria showed doctors trying desperately to revive three children under the age of four.

The founder and president of the Pugwash Conference, Joseph Rotblat, right, and the Secretary-General Francesco Calogero, display their Nobel medals and diplomas during the Nobel Peace Prize ceremony on Oslo Town Hall Sunday Dec. 10, 1995. (AP Photo)

One of the major protest movements against weapons of mass destruction started in Canada in Pugwash, N.S., in 1957 – and went on to win a Nobel Peace Prize in 1995. The award, according to the committee, honoured the Pugwash Conferences on Science and World Affairs and one of its co-founders, Joseph Rotblat, for their role in trying “to diminish the part played by nuclear arms in international politics and, in the longer run, to eliminate such arms.”

That first meeting, hosted by philanthropist Cyrus Eaton in 1957, attracted 22 researchers from around the world when the Cold War was at its height and many scientists were moved to speak out against the threat of nuclear arms.

The Nobel committee recognized the movement for its role in encouraging communication across the Iron Curtain and helping bring about nuclear-test-ban and non-proliferation treaties.

Sci-fi author H.G. Wells saw the prospect of a nuclear age coming in his 1914 novel The World Set Free. “When he could look down again it was like looking down upon the crater of a small volcano,” Wells wrote in the book, set in 1956 during a global conflict. The passage describes an explosion from a nuclear bomb hoisted over the side of the plane. “In the open garden before the Imperial castle a shuddering star of evil splendor spurted and poured up smoke and flame towards them like an accusation.”

The phrase “weapons of mass destruction” was first used in 1937 during a sermon by the Archbishop of Canterbury. Reflecting on the Sino-Japanese conflict and Spain’s ongoing civil war – including the deadly aerial attack on the town of Guernica – Cosmo Gordon Lang said: “Who can think without horror of what another widespread war would mean, waged as it would be with all the new weapons of mass destruction?”

A nuclear strike is ordered by a deranged U.S. general in Stanley Kubrick’s 1964 black comedy Dr. Strangelove or: How I Learned to Stop Worrying and Love the Bomb. Of all the films stoking Americans’ nuclear anxieties, Mr. Kubrick’s stands out: The late film critic Roger Ebert described it as arguably the best political satire of the last century because it “pulled the rug out from under the Cold War.” World powers in a standoff, with each holding a nuclear deterrent, is upended by U.S. Brigadier General Jack D. Ripper.