Serene images of sea lions, spirit bears and cormorants are hardly cause for controversy, but they have created quite a stir in the oil and gas capital of Canada where they have been deemed too "political" as part of an anti-pipeline art exhibit.

The B.C.-based Raincoast Conservation Foundation, which is behind the exhibit that has been on tour for months, is auctioning the items (most have already been sold) to raise money for its ongoing anti-pipeline campaign.

On Tuesday, city officials told organizers that the atrium "will not be used for political events," but nonetheless allowed the show to stay until Wednesday - its planned end date after a three-day visit.

The display would never have been approved if the city was aware of the "connection to a political cause," according to Sharon Purvis, director of corporate properties and buildings.
She said the city will look at changing its application forms so groups with political messages won't be approved down the road.

Brian Falconer, Raincoast's marine operations coordinator and exhibit curator, said the display was initially approved by the city and isn't meant to be political.

"It's a question of interpretation," he said.

"We're not a bunch of radicals; not a bunch of extremists," he added. "We're just Main Street people who love the Coast and who are terrified for this project."

The threat of large numbers of oil tankers converging on the West Coast is hotly debated among British Columbians who are concerned that if approved, Enbridge Inc.'s Northern Gateway pipeline could result in oil spills that could devastate the region's maritime scenery and resources. A similar dispute is raging in the United States, where the proposed Keystone XL pipeline by another Canadian company, TransCanada Corp., would bring crude from Alberta's oil sands to the U.S. Gulf Coast.

One Calgary city councillor was working hard Tuesday to have the exhibit kicked out of City Hall.

"I'll declare my bias," said Diane Colley-Urquhart. "I'm all for the Northern Gateway pipeline and the Keystone pipeline, and City Hall is no place for them to be making their political statement."

She called the art "beautiful," but described Raincoast's methods to receive approval from the city as "extraordinarily deceptive" since there is fundraising involved. Sales are prohibited in the atrium, which is supposed to remain neutral.

Alberta's Justice Minister Jonathan Denis, a Calgary MLA, joined the fray on his Facebook page, writing that "if we're going to allow one side of the issue on display in a public place, equal opportunity should be given to the other side as well."

Alberta's Deputy Premier Thomas Lukaszuk said the artists are free to express themselves. Asked if the paintings should have been removed, he replied, "No, God no."

Alberta Premier Alison Redford told reporters this week that she has no concern about people expressing their opinions, but hoped any fundraising connected to the project should be used for "fact-based" communications.

Mr. Falconer, said there's nothing to actually buy on site. There is through the organization's website.

"It is obviously a challenging issue here in Alberta and an attempt to bring a reasonable conversation to it is tough," he said "It's an emotional issue for Albertans who have a lot of skin in this game."

The show, which is accompanied by the film, Reflections, was screened at the nearby city library, Monday night, including by Paul Fisher, Enbridge's vice-president of western access, who dropped by as a courtesy and then stayed to chat for 45 minutes.

"I don't think it makes sense just to continue butting heads and us saying yes and them saying no and never the twain shall meet," he said. "I think we need to understand what their issues are. They need to understand where we're coming from and look for some middle ground."

As for the controversy over the art display, he called it "unfortunate."

"I'm sympathetic to the councillors that want to ban it," he said. "They're actually helping the cause of raising the profile of the show, which is OK, because otherwise the show might get ignored."

Mr. Bateman is no firebrand on hydrocarbons. He said, "this wonderful, beautiful life" he has led is "all because of oil." It was oil that powered the Grumman Goose up the B.C. coast so he could paint the eagle and unsullied coast in the piece he submitted for the exhibit.

"I've always been a champion of nature. So my bottom line is nature – and I think this pipeline proposal could be too risky for nature," he said.

Hundreds of people have visited the exhibit, including Helena and Berend Jonkers of Calgary who were drawn to it when they heard all the hubbub.

They see both sides of the issue; Canada has benefited from oil, but they'd like to see more pipeline inspections.

"The pipeline is not wrong, but it must be done in a better way," Mr. Jonkers said. 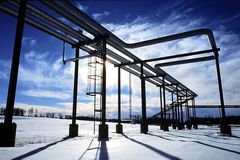 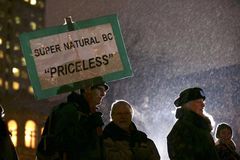 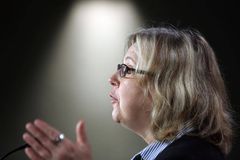