It seems like a perfectly ordinary, single-family suburban home. But just inside the front doorway, a shoe shelf brimming with footwear of all sizes suggests this is one busy household. Toronto Argonauts Chad Owens and Andre Durie are living here together with their families during this Canadian Football League season to stretch their salaries and ease the logistics for the Owens family, who live a whole different life in Hawaii during the off-season.

It's 4:45 p.m., and the house is abuzz. Parents and kids spill out of the big restaurant-style booth in the kitchen and grab their coats. The two players have nine-year-old boys who also play football together, and it's rare that the two fathers can make it to the kids' games, so tonight is special. Chad Owens Jr. and Cian Arendse-Durie excitedly lace up their cleats and clump, clump, clump toward the door in full gear. An oversized Argonauts hat bounces around on young Durie's head as he banters with little Owens, who is sipping on a blueberry power shake, just like his dad often does.

Both families empty out into the driveway in a steady stream. Mr. Owens, a star receiver and return man for the Argos, loads his boy into an SUV with his wife, Rena, and their two daughters, Areana, 7, and Sierra-Lynn, 4. Mr. Durie, a Mississauga-born-and-raised running back and slotback for the Argos, gets into his vehicle with his son and his fiancée, Tova.

The Owens family has spent the past seven seasons moving back and forth between their home base in Honolulu and some city or another in the National Football League, Arena Football League or CFL. So this year, to save both families money and make life a little easier on the travel-weary Hawaiians, the Duries are sharing their home with the Owenses. That's four parents and four kids in the same digs for the entire season. As little Durie quite animatedly describes, the house "used to be quiet, but now it's very, very loud."

Rooming with teammates is something several CFL players do. The league doesn't release salary figures, but a receiver typically pulls in low six figures. CFL players aren't making mega-millions like their NFL counterparts but, more importantly from a logistical standpoint, many players want an easy six-month lease during the season because they live and work in another city in the off-season.

Mr. Durie, 31, also works for Community Living Mississauga, doing outreach programming for people who are physically or mentally challenged. Immediately after the CFL season, Mr. Owens and his family return home to Hawaii, where he is a part-owner and trainer at an athletic training facility. The kids often tag along with him to work and train, too.

Mr. Owens, 30, and his wife have been together since they were 12-year-olds in the same Honolulu neighbourhood – their first "date" was shooting hoops at the playground. She has watched a lot of football and followed him to many a new city. When he was drafted by the Jacksonville Jaguars in 2005 out of the University of Hawaii, they made what Mr. Owens now calls the "NFL rookie mistake" of immediately buying a Jacksonville home … just before the U.S. housing market took a dive.

Mr. Owens spent three seasons in the NFL, then ended up with the Arena Football League's Colorado Crush. His young wife packed up the contents of the Florida home and moved it all to a Colorado storage facility, where it still sits today. She joined him with two kids in tow just weeks before delivering their third. The family also joined him for his brief stint with the Montreal Alouettes. He says he feels at home now in his third season in Toronto, leading the CFL in return yardage and chasing the top spot in receiving yards, too. He just became the first player in pro football history to amass 3,000 combined yards in three different seasons. Yet the family still tries to travel light.

"There I am every year surfing on Craigslist from Hawaii, calling around to some city in a different time zone, looking for a six-month lease, then constantly packing and unpacking – it's been that way for many years," Rena Owens said. "This year was so much easier – the Duries had everything already here."

Last season, Mr. Durie shared his house with a player from – gasp – the Hamilton Tiger-Cats, Toronto's long-time rival. Mr. Durie had befriended Ticats placekicker Justin Medlock when he had been an Argo during the previous season. When Mr. Medlock moved to the NFL this season, Mr. Owens reached out from Hawaii and asked Mr. Durie if he wanted some new housemates. Mr. Durie said sure. After all, he had just finished his basement, adding a new bathroom and bedroom, so there was extra space in the now four-bedroom suburban Burlington home.

"I said to Durie, are you sure, man? It's not just me and wifey, you know, there are three kids too. But he said, 'Yeah, it's all good, we'd love to have you guys,' " Mr. Owens said. "We pay rent – but not as much as we were paying on our own in Mississauga last season – and it helps them with their mortgage, too. Plus we all get to hang out together, so it's been awesome."

They don't divide the place up by family – they say the whole house is open to everyone. But the kids typically sleep downstairs. They play video games, help each other with homework and watch lots of football; the two boys are starting to develop a keen eye for the X's and O's.

"We take turns cooking. I cook, Tova cooks, Rena cooks … but C.O. doesn't," Mr. Durie said, laughing. "The four kids really love each other. They are a very tight-knit group. There is some bickering among them, but lots of playing and jumping. Cian has had to grow from the only child in this house to having to share. They all figured that out pretty quickly. That's another thing we wanted out of this, for Cian to build relationships."

Mr. Durie and Mr. Owens are out the door at 7 a.m. most days for a long day of training, practices, film study and meetings, so the two women get the three kids off to school and are often the ones taking the boys to their Atom football, too.

"My kids are very outgoing – they have a lot of aloha and get along with everybody, and will have incredible stories to tell back home," Mr. Owens said. "I know there will be a day when they say, 'Dad, we want to stay home,' and I'm not going to hold them back. I will do my best to make sure they're happy always."

The two families arrive early for the kids' game, a rare evening contest that will be played under the lights. Mr. Owens and Mr. Durie wildly click photos of their boys, who just happen to play for a blue team called the Argos, lining up across from a black-and-gold Ticats squad.

The coaches have the two pros stand on the sideline with the team. Mr. Owens and Mr. Durie bark out the odd tip about safety and technique, and can't wipe the grins off their faces as they watch their two boys deliver hits and make plays. The men laugh and holler and cheer, jumping and pumping their fists, giving a hearty wallop on the back to every little boy who scuttles over.

"It's great bonding time for both families," Mr. Durie said. "My voice is gone – I've been screaming and jumping all game. I had to be on the sidelines for that – I couldn't experience it in the stands."

On the opposite sideline, the two women and the little girls watch while bundled in coats and blankets. The Owens girls bounce around the turf and eat snacks while singing "Let's go Argos, cha cha cha."

"We didn't own heavy coats when we lived in Hawaii – I don't remember it ever dropping below 55 (Fahrenheit) there," Ms. Owens said. "The kids love and miss Hawaii – they miss the beaches and Poppa and Grandma and their cousins, but they are having a lot of fun in Canada – and just think of the amazing experiences they're having." 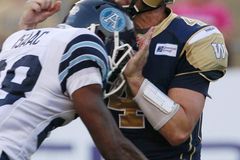 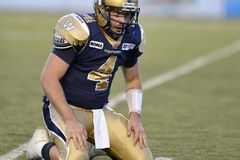