Thousands of Quebeckers marched in the streets for the first time in weeks on Sunday, reviving a vacationing protest movement that faces difficult tactical choices in a looming provincial election campaign.

Even as they banged drums and sang songs along downtown streets, students and their supporters were weighing options: Do they resume the intense protest tactics of the spring and risk pushing fence-sitting Quebeckers into voting for the incumbent premier, Jean Charest?

"It's a classic double-edged sword. I think it's going to get rough, and if it does, people who have not decided could turn against us," said Michel Thériault, a student of administration at the Université du Québec à Montreal. "On the other hand, people are mobilized and fed up with Jean Charest, and you don't want to lose that advantage."

The protests went quiet in July as students and activists headed off to summer jobs and vacation, but organizers are sticking to the 22nd of every month for a major protest. The police helicopter that hovered over Montreal nightly in the spring was grounded for weeks until Sunday. Even the peaceful clanging of pots of pans has faded into a sporadic vestige.

The loss of momentum was inevitable as campuses went dormant, student leaders say. They are also recalibrating their approach for an election campaign widely expected to be called next week.

Student groups plan peaceful rallies and a tour of the province, but they say they do not intend to dog Mr. Charest at campaign events. Others might. Protesters have proven difficult to control in the past.

The forthcoming election will be decided on razor-thin margins, and the last thing student leaders want is to drive swing voters who favour a tuition hike and law-and-order into the Liberal camp.

In the spring, polls showed the majority of Quebeckers supported a tuition hike and they gave Mr. Charest a gentle nudge upward in a tight race with the Parti Québécois, which came out firmly in favour of protesters.

The possibility Mr. Charest might win again was not lost on the street Sunday, where students like 18-year-old Jasmine Latendresse rattled off the many ways votes could split with two big parties and two smaller left-wing parties presenting alternatives to the Liberals.

They also expressed anxiety about what could happen next. "Civil war?" said Ms. Latendresse, a college student, punctuating her words with a nervous laugh. "Really though, what a total, lamentable failure it would be for us," added her friend, Mr. Thériault, 24.

Preparations for a summer election campaign have ramped up among all of Quebec's main parties. Candidates and organizers have raced to rent office space, print publicity material and sign up for social media like Twitter.

They've also been forced to deal with their first eruptions of controversy. François Legault, leader of the Coalition avenir Québec, dumped candidate Kamal G. Lutfi after he went on a tweet-rant accusing Quebec separatists of being racist.

Mr. Lutfi complained he had been the object of "hatred" from sovereigntists because of his ethnic origin, which he did not specify. (Mr. Lutfi's account was locked down and renamed "Gone Fishing" by Sunday afternoon. He could not be reached.)

"The words of Kamal Lutfi are unacceptable and I've excluded him from running," Mr. Legault said in a statement. "My apologies to anyone he offended."

Mr. Legault's party, which has promised to set aside questions about Quebec's independence for at least 10 years, has attracted candidates from both the federalist and sovereigntist camps.

While Mr. Legault tried to douse controversy, Mr. Charest wrapped up a tour of northern and eastern regions of Quebec where he poured money into projects. The government pumped out funding announcements, from tens of millions of dollars for northern mining infrastructure to $50,000 for a blueberry interpretive centre in Saint-Léon, in the Saguenay region.

Charest’s fate in Quebec election comes down to these six ridings
July 23, 2012 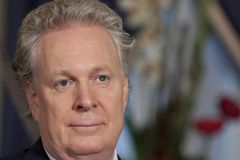 Opposition parties gearing up to take down Charest’s Liberals
July 18, 2012 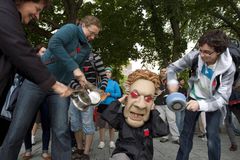 Opinion
Charest’s political life is on the line
July 18, 2012

Opinion
Why Quebec’s election is too close to call
July 20, 2012
In Montreal, a new-look patriotism peeks out on Canada Day
July 1, 2012 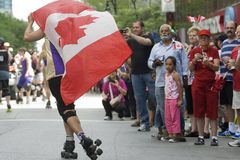