It was an attack that shocked the world and struck at the heart of Canada's government: A soldier dead at the National War Memorial, gunfire at the Parliament Buildings and a city's downtown core put on lockdown. As details began to emerge Thursday and Friday, questions remained about the shootings in Ottawa Wednesday, the slain suspect and the incident's impact on the capital – and the country. This is what we know so far.

WHAT HAPPENED IN THE PAST 24 HOURS?

Click on the map for a visual timeline of events 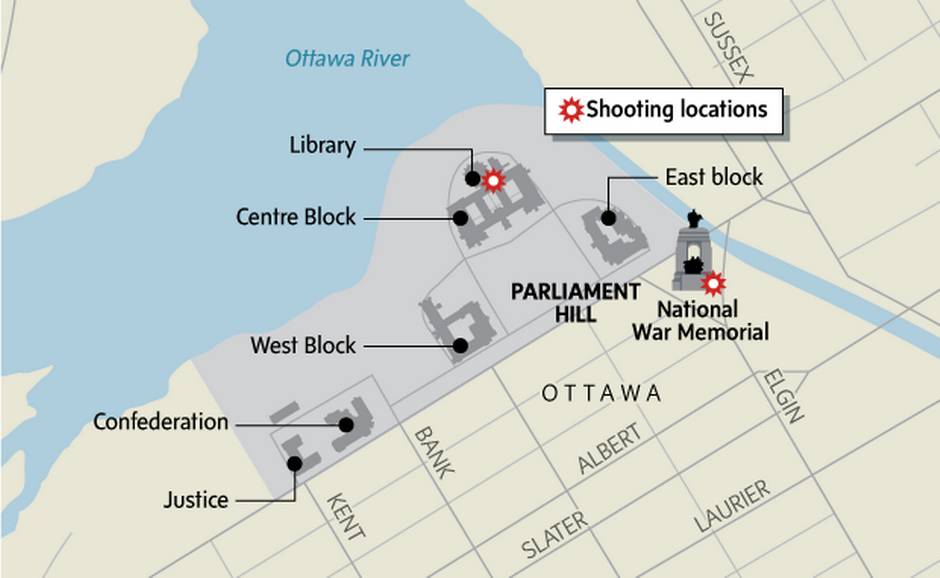 Read Ann Hui's profile of Nathan Cirillo and a first-hand account of the efforts to save Cpl. Cirillo's life

MEMBERS OF PARLIAMENT RETURN TO HOUSE

Social media: Canadians react to the Ottawa shooting with hashtags, hope and patriotism

THE MAN OF THE HOUR

Kevin Vickers, the sergeant-at-arms who was one of the people who opened fire on the gunman inside Parliament, was greeted with applause and hugs on Thursday as he carried Parliament's ceremonial mace to reopen the House.

Ongoing investigation: Investigators attempt to determine if Mr. Zehaf-Bibeau was executing a well-thought-out plan or acting on impulse when he stormed through the front doors of Parliament brandishing a large rifle. (Read more about the investigation of the brazen attack on the capital and watch the surveillance footage released by the RCMP that shows Zehaf-Bibeau entering Parliament)

Canadian soldiers: Canadian Armed Forces personnel in the Ottawa area have been ordered not to wear their uniforms in public, unless on duty. Military bases across the country have ramped up security measures. (Read more about how soldiers are being told to keep safe)

Ottawa: The gunman's assault on the Parliament buildings has raised questions about how to balance security with access to the public – and renewed interest in a 2012 report by Auditor-General Michael Ferguson about security on the Hill. (Read more about security on Parliament Hill)

Prime Minister Stephen Harper: "In the days to come, we will learn more about the terrorist and any accomplices he may have had, but this week's events are a grim reminder that Canada is not immune to the types of terrorist attacks we have seen elsewhere around the world." (Watch footage of Mr. Harper's speech Wednesday night)

Patrick Martin (subscribers only): "On Wednesday, a lone gunman was able to make his way to the centre of Canadian government, shaking an entire nation. Imagine what might have happened had the assailant been part of a larger more sophisticated operation. Is Canada ready for that?"

H.A. Hellyer: "Canada can either make its Muslim community suffer twice for this attack – first as Canadians who feel pain about what happened, then as Muslims unfairly suspected of collusion – or they can continue to stand with their compatriots against any threat."

Globe Editorial: "Kevin Vickers, the sergeant-at-arms of the House of Commons, routinely carries the ceremonial mace into the House as a symbol of authority. On Wednesday, in extraordinary circumstances, Mr. Vickers and his colleagues rightly and capably used weapons somewhat more modern and effective than a mace – guns."

Margaret Wente: "We Canadians are steadfast and a bit phlegmatic. These are among our finest traits. We don't get that excited, and we won't be cowed into giving up our freedoms. Also, when necessary, we can shoot to kill. So long as we retain these virtues, the terrorists don't have a chance."

Doug Saunders: "Of the approximately 40 national legislatures I've had the opportunity to visit, few have been as open to the public, as easy to walk into off the street and observe up close, as Ottawa's. Many have started out that way – but it is hard to find a country whose national seat of government has not been threatened with, or actually experienced, the sort of violence that Ottawa did on Wednesday. The angry gunman in the legislature is a constant, distressing phenomenon worldwide, and the way we respond tends to be depressingly similar: by turning democracy into a fortress."