It could have been a celebration of the federal NDP winning power for the first time in its history.

Instead, Tom Mulcair stood in the crowd and gamely tried to look happy as Rachel Notley – the lone NDP Leader in the country to run an effective campaign since Jack Layton in 2011 – addressed Thursday evening's Broadbent Institute gala in downtown Toronto.

And around him, drowning out much of the evening's program as they talked among themselves, the NDP's version of the chattering classes seemed to be slowly waking up from their postelection stupor.

It is a strange state of denial that New Democrats have been in since Oct. 19. Apparently intent on keeping his job, Mr. Mulcair has been trying to claim moral victories for the NDP, as though losing well over half its seats wasn't a disaster.

Meanwhile, defeated candidates, party workers and members of the grassroots have been making excuses – a principled stand on the niqab, strategic voting, media bias – as if huge strategic mistakes and a lacklustre performance from their leader did not contribute to blowing the lead they held at the outset.

Now, the tone seems to be shifting a little. Not that New Democrats are yet having all the necessary conversations. But they're at least acknowledging they need to have them, which is a start.

Leading up to their national convention in April, at which, among other things, they will vote on whether Mr. Mulcair should stay on as leader, there is a lot for New Democrats to ask themselves about how this campaign went down, and how to respond.

Why did they respond so badly to the whiff of success?

Entering every previous federal campaign, a member of the NDP's campaign team observed before this one began, the party's biggest imperative was getting attention. This time, leading in the polls, it would be managing the attention.

It's safe to say the NDP overadjusted. The tone was set on the campaign's first day, when Mr. Mulcair refused to take questions from reporters. He looked more like he was trying to get through the first leaders' debate than to impress. Like an underdog hockey team surprised to find itself with a two-goal lead, the NDP fell prey to the sort of risk aversion that gets away from what was working in the first place.

Although a new experience federally, blowing leads with cautious and tentative campaigns has been a familiar story for New Democrats – notably in British Columbia's last provincial election. It's probably not a coincidence that the biggest NDP victory in recent years, in Alberta, came in a campaign nobody expected it to win. But it can't always work that way.

Why were they so poor at articulating their values?

Another familiar story , including in last year's Ontario election, has been trying so hard to reassure voters it's not the same old NDP that the party is no longer perceived to offer much change.

In this case, the most glaring example was refusing to consider running a deficit, and sharply attacking the Liberals for doing so. New Democrats counter that their platform had plenty of progressive planks. But voters could be forgiven for not having known about most of them. Some, such as a pharmacare program, weren't even unveiled until it was too late; others, such as national daycare, were undermined by the balanced-budget pledge.

There's some danger of now veering back toward unabashed socialism, as emboldened NDP hardliners never comfortable with pitching to the mainstream will advocate. Somewhere between pragmatism and principle, there has to be a balance.

Why did they so badly misread the campaign's arc?

Mr. Mulcair's strategists made two costly assumptions at the campaign's outset. One was that most voters wouldn't pay attention until Labour Day, so it was best to conserve resources before then. The other was that Justin Trudeau had suffered too much from self-inflicted wounds and effective Conservative advertising to get his Liberals (then running third) back in the game.

In fact, August turned out to be a sort of primary to determine who would get to be the main alternative to the Conservatives. The Liberals, who spent millions of dollars on advertising while the NDP held fire, won handily.

It's comforting for New Democrats to tell themselves their collapse only happened after the mid-September flareup of the niqab debate. But by that point, the Liberals were already polling well ahead of them outside Quebec and Mr. Trudeau had surpassed Mr. Mulcair on most leadership perceptions – often a harbinger of shifts in parties' popular support. Rather than firmly establishing itself as the country's dominant centre-left party, the NDP had let the Liberals off the mat.

Why weren't they more nimble?

Once it became clear the Liberals were gaining traction, the NDP did little to adjust its messaging. And once it was running third, it didn't do much (beyond opposing the new Pan-Pacific trade deal) to pivot, still trying to convince voters it was the only party that could beat the Tories.

Despite improvements to some aspects of their organization – fundraising, and to some extent voter mobilization efforts on the ground – the New Democrats also continued to lag behind their rivals in the professionalism of their communications. (The quality of their advertising, when they aired it, was a particular problem relative to the Liberals.)

The NDP's top backroom people, including campaign director Anne McGrath and strategist Brad Lavigne, are mostly well-liked. Both stepped in relatively late this time, when the people with whom Mr. Mulcair initially surrounded himself were struggling. But the party will be doing itself a disservice if it gives them or others a free pass.

Is Mulcair capable of better?

Mr. Mulcair became leader not out of sentimental attachment, but because he seemed best-suited to building on the 2011 breakthrough. He failed miserably at that, and even at his baseline imperative of consolidating gains in Quebec – partly because of the strategic and tactical problems, but also because he was outperformed on the hustings by a younger and more dynamic opponent.

The onus should be on him, in the next few months, to stop spinning this campaign and make a real case for why he could be better next time. And he needs to convince New Democrats he's capable of the painstaking work of rebuilding his party before then, having built a reputation in his first couple of years as leader for spending too much time in Ottawa.

The NDP prides itself on not turning on its leaders the way other parties do, which is admirable to a point. But that shouldn't be a crutch in dealing with this question or the many others facing it. 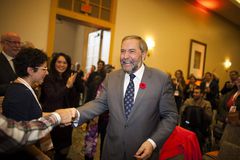 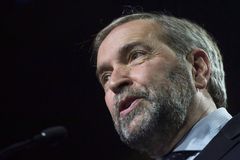 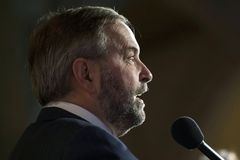