Midway rides are a go, the chuckwagon track and grandstand are restored, and federal politicians wearing large belt buckles have arrived. Calgarians are ready for 10 days of Stampede celebrations.

After a frenetic, around-the-clock effort to clean up the Stampede grounds that were flooded by the swollen Elbow River waters just two weeks ago, many hope the rides, rodeo and entertainment will help cheer Alberta from a series of devastating June floods, and the long cleanup and rebuilding that lies ahead.

Thousands are expected to line the streets of downtown Calgary Friday morning for the Stampede parade – marshalled by retired astronaut Chris Hadfield – that marks the beginning of the celebration focused on Alberta's ranching and cowboy history. A massive cleanup effort around the city and at the Stampede grounds, covered by water and silt just two weeks ago, has ensured the party could go ahead.

"It's very easy for naysayers to say: 'People are still out of their homes. What are you doing having a big celebration? What are you doing having a big party?" That's not really what this is about," said Calgary Mayor Naheed Nenshi. "Yes, it's about economic impact, but it's even more about showing the world that, yeah, we're looking after our neighbours but we're also looking after people who want to visit here."

Cowboy hats, shirts and boots are now the standard uniform in downtown Calgary. The parties that go along with the Stampede have already begun. But some events, including big-name country and rock acts Carly Rae Jepsen, Tim McGraw, the Dixie Chicks and Kiss, have been cancelled as a result of the flood damage to buildings.

Along with the hedonistic festivities that will still go ahead comes bits of sobering news, including that the silt-laden Calgary Zoo – which won't fully reopen until late November – has laid off 287 members of its staff. Animal exhibits are still heavily damaged from Bow River flood waters, and the zoo will soon have to make the decision whether to ship some animals to other facilities for safe keeping.

"It's going to take months to get back to where we were," said Calgary Zoo spokesman Lindsey Galloway.

"The thing I think is coolest is it's alligator and it still flexes with the alligator hide," he said. "I'm like a six-year-old boy. I think that's pretty cool."

Politicians of all stripes make the annual pilgrimage to the 10-day festival to shake hands, flip pancakes and be seen, but this year the flooding disaster has made the tone slightly more reverent.

Prime Minister Stephen Harper was scheduled to arrive in Calgary on Thursday afternoon and will attend the parade. Federal Liberal Leader Justin Trudeau will arrive in the city on Saturday and attend Stampede events on Sunday, as well as helping with flood cleanup efforts.

Green Party Leader Elizabeth May arrived earlier in the week to help with a fundraiser, and planned to volunteer with the cleanup efforts in High River on Friday morning. Her party will hold its annual Stampede bannock breakfast this weekend.

She said in the aftermath of the floods, the focus needs to be on helping people and rebuilding. But down the road, Ms. May said the disaster in Alberta is another sign the Harper government needs to take action on climate change.

"Climate change was clearly a factor. We know that a warmer atmosphere will hold more moisture than a colder atmosphere," Ms. May said. "The scientists have seen a clear shift in Calgary's and southern Alberta weather patterns."

At a Calgary pancake breakfast on Thursday morning, Official Opposition Leader Thomas Mulcair said he doesn't think the rest of Canada has a full understanding of the devastation caused by the southern Alberta floods that hit two weeks ago. The massive scale and scope of the cleanup and rebuilding in the wake of billions in flood damages is easily underestimated, he said.

Mr. Mulcair also travelled to the Siksika First Nation on Thursday and visited the town of High River – where the cleanup of thousands of homes and businesses is in full swing. There, he met Alberta's official Opposition Leader Danielle Smith, who heads the province's right-of-centre Wildrose Party.

He said the flooding disaster means politicians must set partisanship aside. "Everybody has to come together to understand that getting Calgary back up and working is not just a local or a provincial priority, it's a national priority for all Canadians."

With reports from Jeffrey Jones and The Canadian Press

Why Mulcair is a big fan of the Calgary Stampede
July 3, 2013 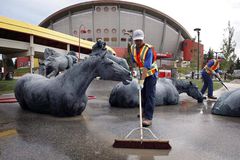 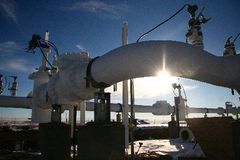