Canadian police have charged Mokhtar Belmokhtar, a fugitive al-Qaeda-aligned bandit based in the Sahara Desert, with the kidnapping of two Canadian diplomats almost five years ago.

The charges amount to a largely symbolic act against one of the world's most wanted terrorists, given there is almost no conceivable scenario where Canadian authorities will get to arrest or try him and his co-accused.

Rather, the intent of the arrest warrants, obtained without fanfare by the RCMP in a Montreal court last week, is to showcase the range of Canada's laws. The Anti-Terrorism Act, passed by Parliament in 2001, criminalizes alleged terrorist actions regardless of where they take place.

The planned prosecution, however, could renew a controversy for the Conservative government. Prime Minister Stephen Harper has spent years denying recurring allegations that his government facilitated a ransom payment to foreign terrorists to free the Canadian hostages.

More recently, the same federal security agencies that have spent half a decade painstakingly putting together the Belmokhtar case overlooked the emergence of a "homegrown" Canadian terrorist cell whose members left London, Ont., to join Mr. Belmokhtar's faction in Africa. Two of these Canadian citizens died in Algeria in January, while staging an attack that killed 37 Japanese, American and European gas-plant workers.

A one-eyed Algerian jihadist who has been rumoured to have been killed several times over the past 20 years, Mr. Belmokhtar claimed credit for that massacre. Rumours of his demise now abound – in recent months, he has contended with a $5-million (U.S.) bounty on his head, efforts by French and Chadian soldiers to hunt down and kill him, and revelations that senior al-Qaeda bosses regard him as an insubordinate rogue.

Given all this, the new Canadian terrorism charges against Mr. Belmokhtar and his co-accused, a Malian named Oumar Hamaha, may matter little to the suspects. Yet the Mounties – who've charged both with two counts of kidnapping for the purposes of financing terrorism – regard the arrest warrants as important.

"Both accused are abroad and their whereabouts are unknown," reads a criminal information document filed in court by RCMP Corporal Gerald Chasles on June 20. "It is therefore in the interest of justice that a warrant for their arrest be issued in order to take measures so that they can be brought before the court to be dealt with according to the law."

A jihadist fighter in 1990s Afghanistan, Mr. Belmokhtar already faces several life sentences in his native Algeria. Now 41, he had spent the past decade associated with a group of Africa-based desert warriors called al-Qaeda in the Islamic Maghreb (AQIM). He broke away last year to form his own Islamist faction, known as The Signed in Blood Battalion.

Mr. Belmokhtar surrounds himself with like-minded fanatics who make homes in the sweltering no man's land between Mali, Libya, Algeria, and Niger, while living off the fruits of smuggling and by reaping ransoms after taking Westerners hostage.

In December, 2008, Canadian diplomats Robert Fowler and Louis Guay were working for the United Nations when they were abducted at the Niger-Mali border. The two men spent the next 130 days as captives of Mr. Belmokhtar's gang in the desert before being released under mysterious circumstances.

Ottawa officials dispatched dozens of federal agents to Africa in hopes of finding and freeing the Canadian hostages. During this "whole of government" mission, spies, soldiers, diplomats and police were told to use their respective skill sets to do what they could .

As commandos contemplated taking the diplomats back by force, spies scoured the desert for signals intelligence, and diplomats engaged in negotiations with local powerbrokers. Meantime the Mounties pursued the case as a criminal investigation.

The release of Mr. Fowler and Mr. Guay on April 23, 2009, coincided with three European hostages also being freed, a British captive being beheaded, and four jailed AQIM terrorists being suddenly released from prisons in Mali.

And a sum of money was also paid – a fact that emerged as controversial within Canada's Parliament and also within al-Qaeda circles.

Just who paid what money has never been made clear. However, this spring Associated Press reporters in Mali recovered al-Qaeda correspondence where senior terrorist figures criticized Mr. Belmokhtar for only getting the equivalent of $1.1-million for Mr. Fowler and Mr. Guay.

"Here we must ask, who handled this important abduction poorly?" one letter reads. " ... Does it come from unilateral behaviour, along the lines of our brother Abu Abbas [Mr. Belmokhtar], which produced a blatant inadequacy: Trading the weightiest case (Canadian diplomats!!) for the most meagre price (700,000 euros)!!"

Over the years, the RCMP police probe plodded along at its own pace – taking twice as long to culminate as did Mr. Fowler's own tell-all book about his captivity, A Season in Hell, which was published in 2011.

"The offenses were committed in association for the benefit or at the direction of a terrorist group," reads RCMP charge sheet filed in court last week. "Furthermore they were committed abroad against United Nation's [sic] diplomats of Canadian nationality."

In March, the Chad military claimed it had killed Mr. Belmokhtar during an operation against a terrorist base in northern Mali, though it provided no proof of that claim.

Last month, the U.S. State Department announced bounties for the two men: up to $5-million for for information leading to Mr. Belmokhtar and $3-million for Mr. Hamaha. 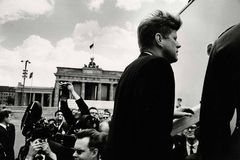 Follow Colin Freeze and Les Perreaux on Twitter @colinfreeze @Perreaux
Report an error Editorial code of conduct
Due to technical reasons, we have temporarily removed commenting from our articles. We hope to have this fixed soon. Thank you for your patience. If you are looking to give feedback on our new site, please send it along to feedback@globeandmail.com. If you want to write a letter to the editor, please forward to letters@globeandmail.com.
Comments