A top Iranian banker who resigned amid a massive embezzlement scandal, one that has soured the political fortunes of President Mahmoud Ahmadinejad, has fled the country and is reported to be in the Toronto area – where a $3-million home is owned in his name.

The scandal is described as the biggest fraud in that country's history. The amounts of money involved exceed even the $2-billion loss the Swiss bank UBS recently sustained due to a rogue trader.

Iranian-Canadian Mahmoud Reza Khavari was the chairman of the board and managing director of Iran's largest bank, the state-owned Bank Melli, until he handed in his resignation Tuesday. He flew from London to Frankfurt the next day, boarding a Lufthansa flight to Toronto, according to the Mashreghnews website.

Mr. Khavari faces no charges in Iran, though prosecutors are seeking to question him and officials at several Iranian banks suspected of facilitating fraudulent payments. News agencies report that, in his resignation letter, he insisted that his bank was not directly involved in the scandal but that he was stepping down "to respect public opinion."

It not uncommon for Iran's elite to have dual citizenship or close relatives living in the West. "His family, they were living in Canada," said Ali Reza Nourizadeh, an exiled Iranian dissident and journalist based in London. "Based on the official statement of the bank, he's gone to Canada on an official business, that's what the bank says."

Property records show a Toronto home that's registered in Mr. Khavari's name not far from newspaper magnate Conrad Black's mansion in Toronto's affluent Bridle Path neighbourhood. The Suncrest Drive property was bought for $2,925,000 on July 30, 2007. When The Globe and Mail approached the house Friday, a woman at the property would not answer any questions.

The scandal may affect politics in Iran, where Mr. Ahmadinejad has lately been at loggerheads with the ruling ayatollahs. His term concludes in 2013, but his rivals are already working to weaken him.

These rivals have tried to tie the controversy to Mr. Ahmadinejad's chief of staff, Esfandiar Rahim Mashaei, who signed a letter ordering the $600-million sale of a state-owned steel plant. The sale was to a key player in the scandal – magnate Mahafarid Amir Khosravi – who is alleged to have forged letters of credit that he used with several banks to secure financing for his purchase of state-owned companies. It's being reported that Mr. Khosravi and the heads of two branches of different Iranian banks are among 19 people who have been arrested.

"Death penalty could await defendants should their intention to undermine the Islamic ruling system by damaging the economy [be proven]" the Fars news agency said.

It unclear what the legal implications are for Mr. Khavari. "It is in Mr. Khavari's interest to come back to Iran to defend himself against the accusations," Iran's top prosecutor, Gholam Hossein Mohseni-Ejei, told the Fars news agency this week.

Officials in Canada are not speaking to the case. But the Canadian government has no extradition treaty with Iran, nor can it legally extradite individuals to countries that are likely to torture prisoners or impose death-penalty sentences.

"This is a huge huge scandal in the history of my country," said Morteza Abdolalian, an Iranian-Canadian blogger based in Oakville.

He added that bank officials in Tehran have circulated statements reassuring clients and shareholders the scandal will not affect their money.

Another top banker, Mohammad Jahromi, head of Bank Saderat, a partly private bank, was also forced to resign this week. He complained he was being made a scapegoat. "Despite my follow-ups and contacting the intelligence ministry and judiciary for the arrest of the main culprits, the main backers of this corruption have publicly blamed Bank Saderat and its manager," he said in comments carried by Fars news agency.

Mr. Ahmadinejad has denied any government wrongdoing and has urged the judiciary to pursue the case vigorously.

With reports from Celia Donnelly and Reuters 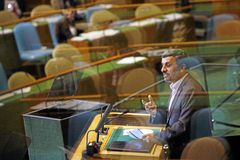 new
Americans convicted in Iran as spies return to U.S.
September 25, 2011
Follow Colin Freeze and Tu Thanh Ha on Twitter @colinfreeze @TuThanhHa
Report an error Editorial code of conduct
Due to technical reasons, we have temporarily removed commenting from our articles. We hope to have this fixed soon. Thank you for your patience. If you are looking to give feedback on our new site, please send it along to feedback@globeandmail.com. If you want to write a letter to the editor, please forward to letters@globeandmail.com.
Comments