New measures put in place by Health Canada to screen medical marijuana companies for contaminants have turned up further problems in the industry, with the discovery of a banned pesticide at Hydropothecary Corp.

The company, one of more than three dozen federally licensed cannabis producers, was told by Health Canada on Monday that leaf samples taken during an inspection of its Gatineau facility contained myclobutanil. The chemical, which is used to kill mildew, is a known carcinogen that is strictly prohibited for use on plants that are smoked because it produces hydrogen cyanide when heated.

"Earlier this year, Health Canada announced it would begin conducting random testing of medical cannabis products for the use of unauthorized pest control products to provide added assurance to Canadians that they are receiving safe, quality-controlled product," Health Canada said in a statement Tuesday.

"The first results of this random testing were received yesterday and have identified low levels of myclobutanil, a pesticide that is not authorized for use on cannabis."

Hydropothecary has halted all sales and shipments to customers while it investigates the problem. The company told The Globe and Mail it will be screening all of its products for safety in the coming days and making those results public on its website.

"This is an evolving matter and we are working closely with Health Canada to determine the next steps," said Shane Morris, Hydropothecary's vice-president of quality assurance and scientific affairs.

Mr. Morris said the problem was discovered in trimmings taken from some of the company's mother plants – which are used to produce offspring plants that are harvested. Hydropothecary is now testing its offspring plants to see if they also contain the chemical. Mr. Morris said the company does not know how the banned pesticide got into the plants in question, and that will also be a subject of the investigation.

Though harmful chemicals are a known problem in the black market, this is the fourth time in less than six months that the government-regulated sector has been hit with a tainted cannabis problem. Mettrum Ltd., Organigram Inc. and Aurora Cannabis Inc. each announced recalls in December because of chemicals such as myclobutanil and bifenazate, an insecticide. Both can lead to serious health problems if inhaled directly into the lungs.

The discovery of myclobutanil at Hydropothecary indicates heightened scrutiny by Health Canada, though, since the regulator had previously not been testing companies for banned chemicals and had essentially left the industry to police itself.

But after the recalls, Health Canada announced in February it would begin randomly testing producers. The department has so far conducted seven unannounced inspections of licensed producers, Health Canada said, and these results are the first of that effort.

The amounts of myclobutanil evident in the Hydropothecary tests are smaller than the problems that triggered the Organigram, Mettrum and Aurora recalls, which involved myclobutanil levels of up to 20 parts per million (ppm).

According to Hydropothecary, Health Canada's tests found levels of myclobutanil of 0.023 ppm and 0.012 ppm.

Mr. Morris said Hydropothecary had been proactively screening its products for pesticides down to a level of 0.05 ppm, which was a policy it introduced a few months ago after the industry met with Health Canada, and had found no problems. However, Health Canada's test results show the regulator is testing for even smaller amounts of banned chemicals than companies are, indicating the government is clamping down.

It is unclear whether Hydropothecary will issue a product recall in the days ahead. Mr. Morris said that determination has not been made.

When the three recalls came to light in December, Health Canada and some of the companies involved said the levels found (of up to 20 ppm of myclobutanil) were "trace" amounts and that consumers were at low risk for health problems.

But a top U.S. toxicologist disputes that assessment, noting that "trace amount" isn't a scientific term, and is often used subjectively to play down any problems. Minute levels of chemicals can have dangerous effects on the body, said Dr. Warren Porter, at the University of Wisconsin-Madison. Another expert told The Globe that levels above 1 ppm are not considered trace amounts.

Because myclobutanil is approved for use on some food crops, such as grapes, the medical marijuana companies involved in the recalls have told consumers it is not harmful. Toxicologists say those statements are misleading, since pesticides are designed to be metabolized by the digestive system. When smoked, they enter the bloodstream directly through the lungs without being broken down.

In fact, the effects of inhaling myclobutanil through smoking have never been studied and its manufacturer, Dow AgroSciences, said in January it has no intention to seek such approval for the product.

Hundreds of patients exposed to myclobutanil and bifenazate through the recalls announced in December have come forward complaining of serious health issues, ranging from breathing problems to persistent headaches and nausea, blistering rashes and muscle pain. Health Minister Jane Philpott will not comment on the matter, despite several attempts to pose questions through her spokesman. 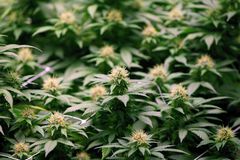 Health Canada under scrutiny for enforcement of marijuana safety
April 13, 2017
Follow us on Twitter @globeandmail Opens in a new window
Report an error Editorial code of conduct
Due to technical reasons, we have temporarily removed commenting from our articles. We hope to have this fixed soon. Thank you for your patience. If you are looking to give feedback on our new site, please send it along to feedback@globeandmail.com. If you want to write a letter to the editor, please forward to letters@globeandmail.com.
Comments