Black Lives Matter staged seven rallies across Canada on Wednesday to protest the recent police-involved death of a Somali-Canadian man in Ottawa, its first nationwide action that signals rising momentum in what some activists consider a new civil-rights movement.

The rallies were far-reaching, spanning the country from Vancouver to an all-day demonstration in Mississauga at the entrance of the Special Investigations Unit (SIU) headquarters.

"This is an exciting time for us," said Rodney Diverlus, co-founder of BLM Toronto, at the Mississauga rally as passing cars honked in support.

The movement now has official chapters in Toronto and Vancouver, with two more set to launch in Edmonton and Montreal.

"Black folks know that anti-blackness and police violence doesn't happen in a vacuum," Mr. Diverlus said. "We look at a situation that happened in Ottawa, and no matter where you live in this country, you think, 'This could happen to me, too.'"

In Toronto, BLM's long-standing target has been the SIU, the Ontario police watchdog that investigates fatal encounters with police in the province. The arms-length agency is currently reviewing the death of 37-year-old Abdirahman Abdi, which could take months to complete.

On July 24, Ottawa police responded to reports of Mr. Abdi groping a woman in a coffee shop. Witnesses said that police violently beat Mr. Abdi, who had unspecified mental-health issues.

BLM Toronto is demanding that charges be laid against the two Ottawa police officers involved in the altercation. It is also calling on the SIU to release a full report into Mr. Abdi's death. Such reports are normally kept secret.

"The SIU actually works to protect officers and to ensure they're absolved of their responsibilities," Mr. Diverlus said. "We want to come to their doors to point a magnifying glass on the SIU and draw folks to take action."

"In an ideal world, the SIU would be disbanded," he added.

"All Canadians enjoy the right to protest and express their opinions in a peaceful manner. The Special Investigations Unit respects this right," the agency said in a statement Wednesday.

The SIU also shouldered the responsibility for legislative change to the Ontario government. The government has appointed an Ontario Court of Appeal judge to lead an independent review of the SIU and two other agencies that oversee police conduct in Ontario.

Mounting pressure from BLM Toronto and other activists prompted Ontario's then attorney-general Madeleine Meilleur to release in April 10 pages of the SIU's report into the fatal shooting of 45-year-old Andrew Loku by Toronto police.

Other rallies for Mr. Abdi were held on Wednesday in Vancouver, Edmonton, Winnipeg, Ottawa, Kitchener-Waterloo and Hamilton.

The coast-to-coast play echoes the movement's surge in the United States, where a recent spate of police-involved shootings of black men has ignited racial tensions and sparked calls for police reform.

"There's a critical mass, much more than there may have been 20 years in places away from Toronto," said Alok Mukherjee, a professor at Ryerson University and former chair of the Toronto Police Services Board.

"It is certainly growing into a national movement. Clearly, their success in Toronto and then in Ottawa has had resonance."

The Mississauga rally on Wednesday was strikingly amiable. Hip-hop music blasted as supporters streamed in for a two-hour demonstration planned for the evening. Nearby, a dozen protesters held a large blue flag that read "Justice for Abdirahman Abdi." Participants wrote messages with colourful chalk on the SIU parking lot, including "Stop killing us" and "We Ain't Sorry #AllBlackLives."

Belen Samuel, 23, joined the rally after flying from Edmonton to Toronto that morning. "I was interested to see how radical the chapter is here," she said.

The rally's friendly tone struck Ms. Samuel. "Everyone here is so loving," she said. "I think it's beautiful."

"Going back [to Edmonton], I want to see how things can be adopted so that we're more progressive and pushing for change rather than just having common conversations."

Wednesday's rallies come a week after members of BLM Toronto briefly shut down the busy Yonge and Dundas intersection in downtown Toronto to issue nine demands regarding Mr. Abdi's death. 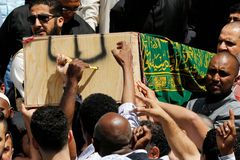