They're the farms of steel behemoths that may one day liberate us from our fossil-fuel dependence.

By 2015, new wind-power developments will double the amount of wind energy produced in Canada.

But as government investment in wind power has increased, opposition has risen in tandem.

Local and provincial legislators are finally acknowledging opponents' growing concerns, but they certainly aren't putting the brakes on development.

This week, the Ontario government proposed that wind farms should have a setback of 550 metres - meaning they should be at least that far from houses. The province was bowing in part to pressure from those who have complained about noise near the base of turbines.

This doesn't mean much for Toronto Hydro's controversial proposal for the Scarborough Bluffs wind farm - a 60-turbine offshore project that would generate 200 megawatts of wind power. Its proponents say the closest it will be to shore is two kilometres, far more than the province's minimum setback.

"I have very little use for the whole NIMBYism argument," he said. "I think the good that comes from it far outweighs the fact that the landscape of an area may not be the same as it was before."

But Mr. Gerretsen's position hasn't weakened the voices of citizens groups opposed to wind-power projects. This year, 32 of them in Ontario joined forces to become the Wind Concerns Ontario coalition. They've co-ordinated mass letter-writing campaigns to legislators and staged a roadside protest in April.

Carmen Krogh said Ontario's proposed setback changes are a good start, but not enough. She doesn't live anywhere near a wind farm, but has spoken out against their development after she had a bout of what she calls "wind turbine syndrome."

After she spent a few days near a wind farm in Southern Ontario, she developed nausea, headaches and heart palpitations. She's one of 50 members of the Victims of Wind support group in Ontario, and the proposed setbacks have helped to ease her concerns, though she said they should be far more than half a kilometre.

"Having been there, I don't know how people live there," she said. "My full dedication is on the health side. Whatever is done with wind energy, I don't want to see anybody sick."

Sandy MacLeod's house is about 800 metres from the base of a wind turbine on the Ripley Wind Power Project in Southern Ontario and she said the sound of the spinning blades keeps her awake at night. When she's outside, it's deafening.

"It was like you were standing in an airfield of jets going by. The roaring [is]unbearable," she said.

Ms. MacLeod said her insomnia got so out of control that she persuaded the project developer to pay for her to stay at inns and a rooming house for 2½months.

But developers have largely dismissed the theory that the spinning blades on a turbine can cause illness.

"I don't think any health concerns with turbines are valid," said Peter Clibbon, vice-president of RES Canada Inc. His company plans to erect two 43-turbine wind farms - one in Northwestern Ontario, the other along the northern shore of Lake Erie - by the end of 2010. On track with two other substantial wind-farm proposals is Calgary-based NaturEner Energy Canada Inc. The company's projects, Wild Rose 1 and Wild Rose 2 - planned for the southeast corner of the province - would boast 136 wind turbines each. Together, they will generate 400 megawatts of electricity, or enough to power 156,000 homes a year. Cypress County has already approved rezoning the first project and NaturEner hopes to receive approval from the Alberta Utilities Commission this fall so it can began construction.

But the projects have also faced opposition. Locals complain that wind turbines would be a blight on pristine prairie, kill birds and ruin the views in a nearby provincial park.

In Quebec, the province has tried to beef up its wind-power capacity while keeping both developers and landowners happy.

In 2003, Premier Jean Charest's government held public tenders to develop 1,000 megawatts in the Gaspé Peninsula. The contracts were firm and Hydro-Québec offered to pay companies 8.3 cents a kilowatt hour. In return, companies were required to produce part of the equipment locally. The move created 500 jobs in impoverished Gaspé communities.

The government made the same offer a few years ago for another 2,000 megawatts of power and accepted 15 projects across Quebec worth $5.5-billion.

By promising jobs, investments and a cut of the profits, the Quebec government helped appease opposition in many communities and allowed the penetration of wind farms in regions that had been reluctant to accept the projects.

"Ontario is now looking closely at what we've done here in Quebec," said Daniel Deschênes, director of energy production at the Quebec Ministry of Natural Resources. "Just look at the Gaspé region. We helped revitalize a region by helping to establish a new industry. And now Quebec has become a gateway for others."

His company has launched wind-power projects in Newfoundland and Labrador, Nova Scotia and Ontario, and he has welcomed the proposed changes by the Ontario government because they make parameters clear for developers.

He said the Ontario government has taken steps toward listening to critics of wind-power projects, and now it's the opponents' turn.

"If I had a choice of having 100 wind turbines in my backyard [and it meant]a small blight of my view, or not being able to see out my backyard because we have so many emissions out there, I'd choose the wind turbines," he said. "At the end of the day, you've got to find the middle of the road."

'ECSTATIC' AT THE EX

An ambitious plan for two windmills in Toronto is in jeopardy after proposed Ontario government regulations were released yesterday.

If approved, the rules would require wind turbines to be located at least 550 metres away from homes, compared with 250 metres proposed by the city's electrical utility and a community green power co-operative.

"At first glance ... we may not be able to install any more machines there," said Joyce McLean, director of strategic issues for Toronto Hydro, which operates one wind turbine at the proposed site at city-owned Exhibition Place on Lake Ontario.

Last month, the board of Exhibition Place approved leases for the two turbines. Even before yesterday's proposed regulations, however, Toronto Hydro and its partner were not set to make a decision until this summer.

"We'd want to see if there could be exemptions or regulations to permit a situation such as Exhibition Place to have wind turbines," he said.

Despite opposition in some areas, he said his residents are "ecstatic" about the current wind turbine.

The first modern wind farm in Canada is the Cowley Ridge development in Cowley, Alta. The 57-turbine, 21.4-megawatt project was erected by Canadian Hydro Developers in 1993 and 1994.

Wind farms cost about $1.8-million to $2.2 million per megawatt to build.

The Canadian Wind Energy Association predicts that by 2025, 20 per cent of Canada's electricity will be generated by wind.

A growing source of energy

Where Canada's electricity comes from /

Wind power is not a significant source of electricity 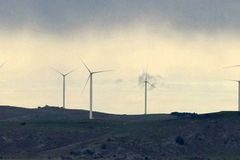