Three Klondike killers have been unearthed in Dawson City.

On Nov. 4, a backhoe operator peered into the pit he was digging for the new sewage treatment plant and saw bones tumbling from the side of the hole. Human bones.

Three coffins were unearthed in a hurried, two-day dig. Historians agree they almost certainly contain the remains of convicts executed by the North-West Mounted Police during the fabled Klondike gold rush.

Their crimes occurred at a time when Canada's northern sovereignty was reinforced with a hangman's noose. In contrast to America's Wild West, the Yukon was a remarkably orderly place, largely because of the series of police posts established by the Mounties shortly before the frenzy of prospecting and mining thatpeaked in 1897 and 1898.

Murderers in those days were vigorously tracked and captured, helping the Mounties establish their reputation for always getting their man. And Ken Coates, a historian with the University of Waterloo, suspects the corpses uncovered on the old site of the Mounties' Fort Herchmer compound are those of brothers Dawson and Jim Nantuck, and Edward Henderson - the first men executed in the Yukon.

The Nantuck brothers, two natives from Tagish, were hanged for murder on Aug. 4, 1899. Their brothers Frank and Joe were sentenced to the same fate, but succumbed to tuberculosis six months earlier.

Prof. Coates and William Morrison, a professor with the University of British Columbia, describe the Nantucks' demise in their book Strange Things Done: Murder in Yukon History.

The brothers were convicted of shooting two prospectors at the mouth of the M'Clintock River. Their motive remains murky. But it may have started with a can of white powder that fell into the hands of an old native woman from Marsh Lake. She took it to be flour. It turned out to be arsenic, which, besides being a potent poison, is used to refine gold. The woman baked bread and fed it to a boy and an old man. Both died.

All belonged to the Crow clan. So did the Nantucks, who would have "had a responsibility to avenge their death, in accordance with tradition," Prof. Coates wrote.

Whether the murdered prospectors had proffered the powder may have been considered irrelevant. Elders who spoke to anthropologist Julie Cruikshank 90 years after the executions suggested that "the two prospectors … were chosen as representing the 'clan' of the white people responsible for the incident, that the prospectors were chosen as social equivalents of the deceased."

The prospectors carried little of value. And there was no escalating violence leading up to the shooting. "These aren't marauding Comanches or Apaches from the Prairies," Prof. Coates said. "These are kindly, polite, northern aboriginal men."

The third man to hang, Mr. Henderson, was an irritable American convicted of shooting his partner at Marsh Lake. Mr. Henderson was afflicted by a painful bladder condition that required him to urinate several times each hour. At night he used a tin can. One evening, the can spilled on his companion's blanket, and the ensuing argument ended with Mr. Henderson shooting the man dead - hardly the stuff of a Robert Service poem.

The Yukon's first executions were intended to send a strong message, Prof. Coates said. "To first nations: If you step out of line, you'll face the full weight of the law, and that includes execution. For the Americans: Don't take things into your own hands - the government of Canada will take all measures necessary and impose justice of the highest order."

Walker Graham, an amateur historian from Dawson City, counts 10 convicts hanged by the Mounties in his town. Hangings were a public event, with Mounties handing out tickets for 100 spectators. The bodies would then be cut down, encased in a coffin, doused in lime and hastily buried.

That was the end - until the remains were found.

Work halted at the sewage plant site when bones were seen tumbling from the excavation wall into the pit. Greg Hare, Yukon's senior archeologist, was flown in. It was about -10 C, and it wouldn't be long before the exposed remains would be frozen into the dirt for the long winter ahead. A team of volunteers was quickly assembled, and rotating shifts toiled late into the night on Friday and Saturday. "It was pretty backbreaking work the whole weekend," Mr. Hare said.

The remains are being kept at a secure site in Dawson. Their identities will likely be resolved through a battery of scientific tests.

Bones tell tales. The shape of a skeleton speaks to posture, height and disease. Teeth may reveal ethnicity, as well as poverty or wealth. Possessions found on site, such as buttons and buckles, also offer hints. Only once the remains are identified will their final resting place be decided.

"People may think this is a wee bit morbid and dark," Mr. Graham said. "But this is how we became a territory. This is an important thing we should talk about."

Another pair of suspects in the Yukon bones mystery
November 13, 2010
Gold Diggers: Striking It Rich In the Klondike, by Charlotte Gray
October 29, 2010
The incredible journey
August 27, 2010 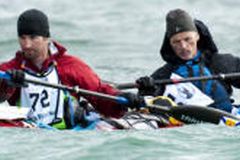