He'd been on the run for 40 hours, and his world was closing in.

After a shooting in Edmonton Friday that left three security guards dead and a fourth injured, the fifth guard became the subject of a manhunt.

His mother begged him to give up, police were reaching out to his friends, and authorities across Canada and abroad knew what kind of truck he drove and what licence plates he had.

All that heist suspect Travis Baumgartner had, it seems, was a backpack with $334,000 in Canadian money and a half-baked plan to evade first-degree murder charges: head for the border.

At 3:08 p.m. local time on Saturday, his blue 2011 Ford F-150 pulled up to a small border station in southwest B.C., between the American town of Lynden, Washington and the Canadian town of Aldergrove. The Kenneth G. Ward border crossing, named for an American border officer shot and killed by a murder suspect in 1979, handles about 3,000 vehicles on a typical weekend day. The Ford, though, raised a red flag.

As the truck approached, cameras automatically scanned his Alberta licence plate, CAA 636, and raised an alert. The plate belongs to his mother, Sandy, and had been stolen. "Armed and dangerous" popped up on American officials' screen.

Seconds later, Mr. Baumgartner arrived at the gate. He had no chance to show a passport (which was just as well, since he didn't have one) or say where he was going; instead, half a dozen U.S. border guards surrounded the truck, .40-calibre pistols drawn, shouting at Mr. Baumgartner to turn off the engine.

"Generally our greetings start with 'keep your hands where I can see them, do not move,' " said Thomas Schreiber, Chief U.S. Customs and Protection Officer in Washington state. "The first thing we wanted to do is gain control of that 2,000-pound weapon – the vehicle."

He gave up without a fight. A guard opened the driver's door and pulled the 21-year-old Albertan to the ground, wet from an afternoon of rain. They patted him down for a weapon, finding nothing, and handcuffed him. "He complied with the officers' demands. It went very smoothly," Mr. Schreiber said. Finally, they briefly searched the truck, finding the cash but no gun, careful to not ruin forensic evidence.

Edmonton police were told of the arrest soon after, and were relieved: they'd been repeatedly telling the public that Mr. Baumgartner was likely armed and dangerous. "Mr. Baumgartner was arrested peacefully and without incident, which was the best outcome that we could have possibly hoped for," said Bob Hassel, superintendent of criminal investigations for Edmonton police.

So ended a manhunt stemming from the notorious homicide case, one with Mr. Baumgartner as the lone suspect. He'd been on the job for G4S Cash Solutions, a private security company, only a few months before the shooting that took place just after midnight Friday morning during a stop to refill a bank machine at the main University of Alberta campus in Edmonton. Five G4S staff were on the job, including Mr. Baumgartner. He's accused of shooting the other four, grabbing cash and fleeing.

It was Saturday evening when word of the arrest reached the Edmonton-area family home of Brian Ilesic, 35, one of the guards fatally shot. His family burst into applause. "We're very happy that he was arrested," said his mother, Dianne. The family had gathered to share stories about Brian, laughing as they coped with grief. "We have to have some laughter to cover up so much sadness," she said.

Mr. Baumgartner was formally rejected entry to the U.S., leaving Canadian authorities free to arrest him without any extradition complications. Cameras captured his transfer, Mr. Baumgartner looking dishevelled with an unkempt mop of hair and a long-sleeve white shirt.

There was virtually no chance the border rush would work. He had only an Alberta driver's licence – his own – which isn't enough to enter the U.S. And within four hours of the crime, or more than a day before Mr. Baumgartner arrived at the Kenneth G. Ward station, Edmonton police had notified the RCMP and U.S. border officials to be on the lookout for him and his truck. "We had the border covered fairly quickly," Supt. Hassel said.

Border officials say people occasionally underestimate the level of security at a crossing station, but the officials are left dumbfounded by some attempts. About a million people apply to enter the U.S. each day, on average, and roughly 50 are arrested, said Mike Milne, a spokesman for U.S. Customs and Border Protection.

"I am always amazed. This is a port of entry on the U.S. border. People understand arrests happen on the border," added Mr. Schreiber. "For someone to drive up and, by their own free will, come in contact with a law-enforcement agent does not always make sense. But we're happy to arrest them anyways."

Mr. Baumgartner is scheduled to be returned to Edmonton this week, where he'll face three charges of first-degree murder, one of attempted murder and four counts of armed robbery. Meanwhile, at the G4S offices in Edmonton, a makeshift memorial popped up for the dead and injured. They include Michelle Shegelski, 26, who had worked for G4S since 2008 and was training two new workers before her death Friday, and both Mr. Ilesic and Eddie Rejano, 39, the new employees who were killed.

"One of the things we need to be mindful of is this is a terrible tragedy," Mr. Schreiber said Sunday afternoon. "Tragically, sometimes, the only thing we can do is help bring closure and justice to a case. And that's what happened yesterday." 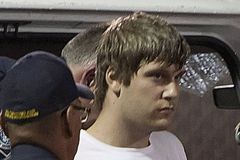 Inside job suspected in fatal University of Alberta shooting
June 15, 2012 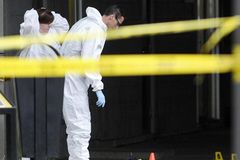 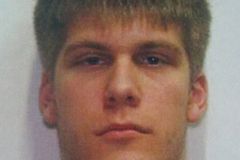 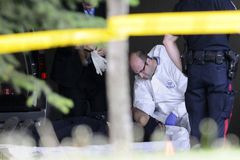