A fourth fugitive whose face was posted online by border authorities has been nabbed.

He was one of 30 people whose names and faces were posted online by the Canadian Border Services Agency earlier this month.

Mr. Carbonel is a 53-year-old Peruvian.

Mr. Toews says the website has generated a lot of tips from the public, although he didn't say if the latest arrest was the result of such a tip.

The minister says the wanted 30 have all been deemed inadmissible to Canada and are subject to deportation.

They are all alleged to be complicit in war crimes or crimes against humanity.

Mr. Toews said the public response demonstrates the usefulness of the exercise.

"We do not want Canada to be a haven for those who have been implicated in war crimes and crimes against humanity," he said. 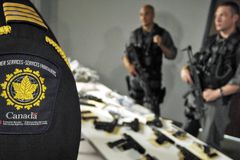