Ruth Ellen Brosseau says she has faced personal attacks since she was elbowed in the House of Commons by Prime Minister Justin Trudeau, including that she should be "ashamed to be a woman" and that she is "not a feminist."

In an exclusive interview Friday with The Canadian Press, the New Democrat MP said her office has received a number of phone calls from people across the country, many of them suggesting that she is "crying wolf."

"My office has received countless phone calls … saying it is my fault, I should be ashamed, I should resign, I should apologize, it is my fault," a visibly shaken Ms. Brosseau said during a conversation at her Ottawa office.

"I get elbowed in the breast and it hurts. It was very painful."

Ms. Brosseau, who used to to break up fights as a bartender prior to entering political life as the MP for a Quebec riding, said she never expected to have to deal with a situation like this once becoming a member of Parliament.

"I am a tough woman, I know how to stand up and deal with situations," she said. "I was just shocked … I was overwhelmed."

Footage from the Commons television feed showed Mr. Trudeau trying to pull Conservative whip Gord Brown through a crowd of MPs, including Ms. Brosseau, who were milling about in hopes of delaying a vote related to the bill on doctor-assisted dying, C-14.

In so doing, Mr. Trudeau collided with Ms. Brosseau, who could be seen reacting with visible discomfort as Trudeau pushed past her, forcing her against an adjacent desk.

New Democrats reported hearing the prime minister mutter, "'Get the f--- out of the way."'

Ms. Brosseau, who teared up several times during the interview, recalled how she felt herself beginning to cry in the immediate aftermath, and decided it would be best if she left the chamber immediately.

"I wasn't going to go running after the Prime Minister," she said. "I was shaking … it is completely inappropriate what happened."

Mr. Trudeau had no right to behave the way he did, she said.

"The Prime Minister intentionally walked over, swore at us, reached between a few members of Parliament to grab the [Conservative] whip … how did he think he wasn't going to hit anybody else?"

Ms. Brosseau said she has accepted Mr. Trudeau's multiple apologies in the House, including in the moments immediately afterward as well as the following day, but noted that the Prime Minister has not contacted her directly.

On Thursday, Mr. Trudeau told the Commons he takes "full responsibility" for what happened.

"I sincerely apologize to my colleagues, to the House as a whole and to you Mr. Speaker for failing to live up to a higher standard of behaviour," he said.

Mr. Trudeau said he did not pay sufficient attention to his surroundings before making physical contact with Ms. Brosseau — something he regrets "profoundly."

Ms. Brosseau said the scrutiny she has received since Wednesday's encounter has been worse than in 2011, when as a rookie candidate she was publicly ridiculed for travelling to Las Vegas during the election campaign.

"I had a lot of media attention in 2011 and after that, I always wanted to just put my head down and work – and work hard," she said. "This kind of attention, I didn't ask for it."

She also said it remains painful to have to justify what she experienced, adding she feels like she is being attacked from all sides when she insists she did nothing wrong.

"If I was a man and I was hit in the nuts, would we having the same conversation? I don't know," Ms. Brosseau said.

"And then [people are asking]: 'Was she hit hard enough in the breast?' Do I have justify how hard I was hit in the breast? It doesn't matter."

She also said she has seen comments on social media suggesting she is minimizing sexual assaults and rapes. She said she has never made such a correlation. "Rape and sexual assault, domestic violence — those are serious, serious crimes and sadly it happens all too often to women and men across Canada."

A Liberal-dominated Commons committee will now be tasked with reviewing the conduct of Mr. Trudeau, although Ms. Brosseau said she hasn't given much thought to what sanctions might be appropriate. "It is just going to be important, moving forward, what happens to make sure something like that does not repeat itself."

House committee to review Trudeau’s conduct after Commons spat
May 20, 2016 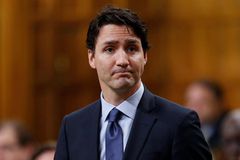