Family and friends gathered this week to mourn the victims of last Tuesday's stabbing attack at a Calgary house party.

Separate funeral services were held for Jordan Segura, Josh Hunter and Kaiti Perras on Monday, for Zackariah Rathwell on Tuesday and Lawrence Hong on Wednesday. 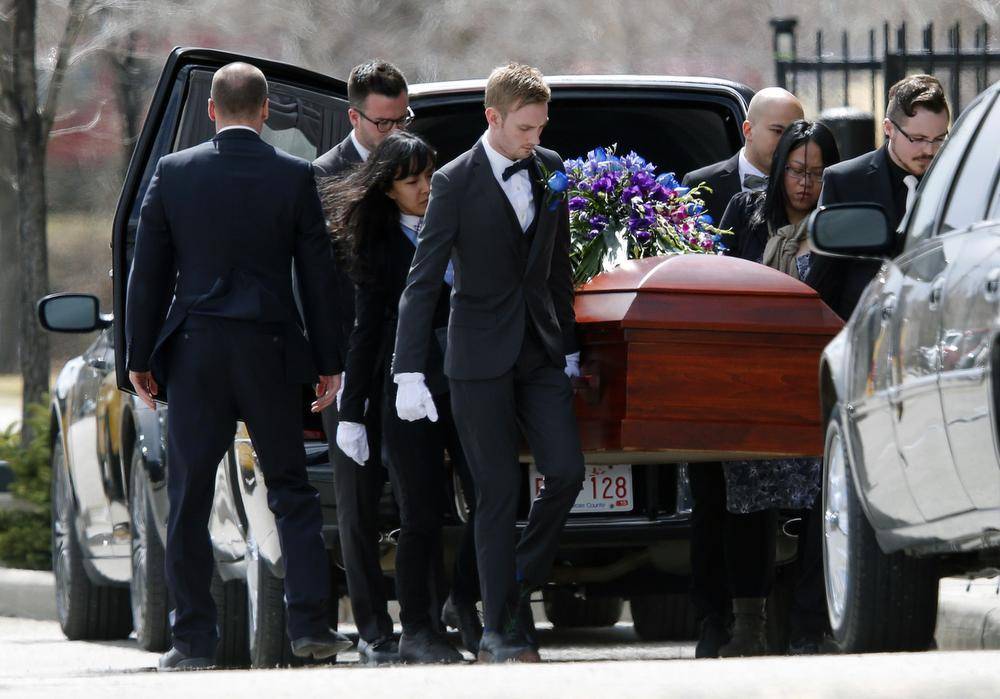 Lawrence Hong’s friends and family members wore bow ties as they streamed by his blueish Peugeot bike Wednesday to attend his funeral – the fifth in three days for Calgary’s stabbing victims.

The bow ties – blue, green, black, patterned, polka dotted, you name it – were a nod to his fashion sense. The Peugeot, his beloved ride, was a reminder of Mr. Hong’s passion for urban pedalling and public transportation.

Some people even rode the 430 Lawrence Hong Express, a special Calgary Transit shuttle ferrying mourners from the University of Calgary to the Centre Street Church for Mr. Hong’s service. (Mr. Hong was born April 30 – the 30th day of the 4th month – in 1986.) He died, along with four other young people in their 20s, after being stabbed April 15 at a house party celebrating the end of the academic year. Mr. Hong, 27, was one final exam away from graduating from the University of Calgary with a degree in urban studies.

“If you were a friend and you needed anything, you could call him in the middle of the night and he would be there,” Miles Hong, Mr. Hong’s younger brother, said delivering a eulogy while wearing a dark bow tie. “And it was sometimes to the frustration of me and my dad, because we would chauffeur him to your house.” The crowd laughed.

Lawrence Hong was born in Iloilo City, in the Philippines. In Calgary, he was an advocate for sustainable transit, and a supporter and mentor in the gay community.

“My brother loved people – he loved interacting with them,” Miles Hong said. “Know that to him, you were family.”

The younger Hong remembered his only sibling as someone who would take care of him, making sandwiches and soup for him even when they were children.

“One of the first things I always tell people when I … describe my brother – maybe after I finished ranting about him for a little bit – is always about how much he cares for me,” Miles Hong said. “Cared. Past tense.” 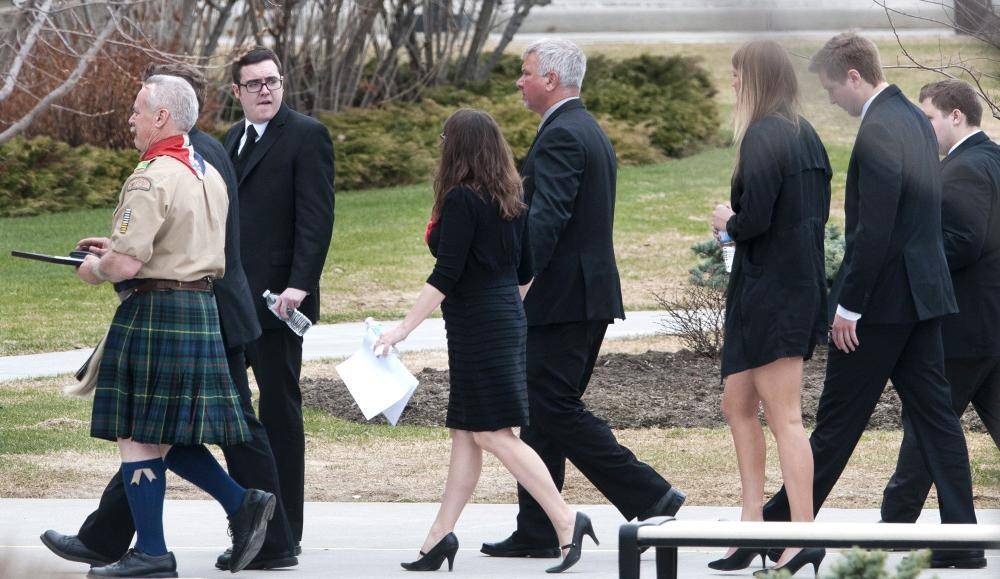 Three guitars sat on stage at Zackariah Rathwell’s funeral, a ceremony centred on his love of music, and songs by long-haired rockers and bandmates were part of the memorial.

Mr. Rathwell played guitar and sang in the band Zackariah and the Prophets. Their music was part of Mr. Rathwell’s funeral at Centre Street Church on Tuesday, a service filled with upbeat tunes like Play That Funky Music.

Bruce Rathwell remembered how his son spent a summer’s worth of savings on his first guitar, a Gibson Les Paul. The elder Mr. Rathwell was taken aback at its price, but his son was unconcerned.

“He wanted it. And he got it,” Mr. Rathwell said in a eulogy. He was dressed in a Scouts uniform, complete with a kilt, to honour his son’s love of the organization. When Zackariah and the Prophets was formed, the members had two priorities: “Friendship first, the band second,” Mr. Rathwell said.

The band rocked The Palomino on the Saturday before the killings at the release party for their first EP. Mr. Rathwell asked his son why his band was the last act.

“Dad, we’re the headliner,” Zackariah replied. “We’re it.” Then the 21-year old excused himself. “Dad, I’ve got to work the room.”

Ronda-Lee Rathwell, Mr. Rathwell’s mother, also addressed mourners. Her son was nicknamed Zoo Boy in the family, and loved hockey. “This past week has been the hardest of my life, but hanging out with Zoo’s friends has made it so much easier,” she said.

“They introduced me to a whole new Zack. Yeah, he drank a lot more than I thought,” she said, drawing a loud laugh from the crowd. “Oh man. The stories and the laughter. I’ve fallen in love with my son all over again.”

Zackariah’s brother, Mason Rathwell, also delivered a eulogy. Mason wanted to be like his brother or better, but usually came up short. “Zack was always better, with one exception: school.” Again, more laughs.

Five friends told also told the congregation stories, occasionally addressing Zackariah as “dude.” They supported each other, with their arms over each other’s shoulders.

One of the five friends quoted their pal. “Get stoked, my friends. Get stoked.” 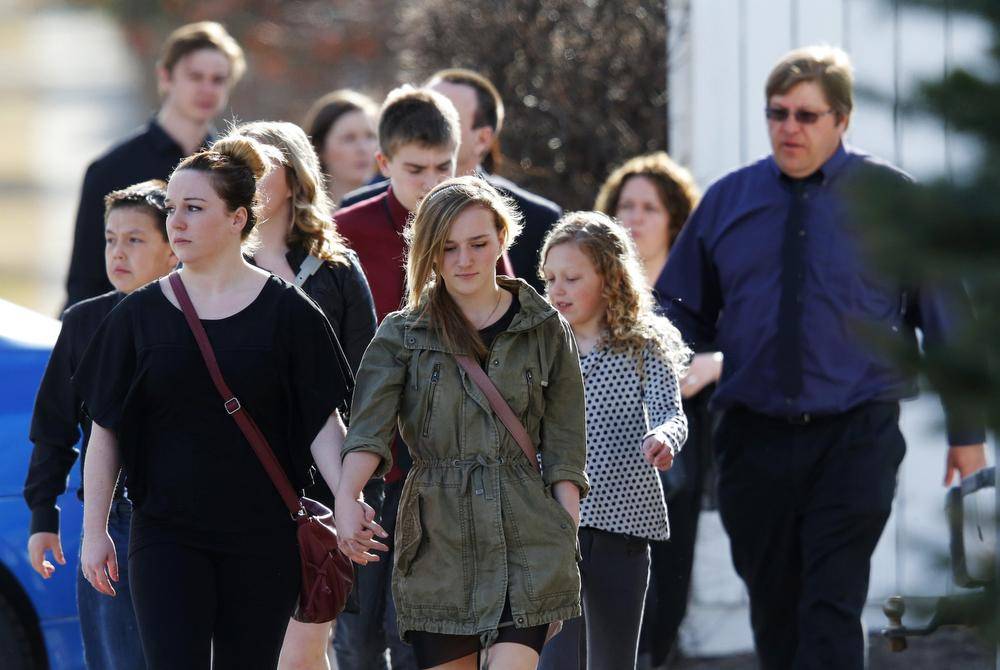 Jordan Segura was remembered on Monday as a gentle and loving son and brother with a close-knit circle of friends and family he put first – even enduring teasing to knit tuques for others .

It was standing room only as hundreds of Mr. Segura’s family and young friends, and Calgary Mayor Naheed Nenshi, packed into a funeral home on the north side of Calgary where 22-year-old University of Calgary religious studies student had worked part-time.

“A good word for Jordan would be integrity,” Jullien Segura, Jordan’s older brother, said speaking at the service. “He would speak his truth, even though it might create conflict or tension. He would make choices based on what he believed, and not what others believed.”

He ended his eulogy with tears. “His friends were his family. I just wanted to say thanks for coming and for the overwhelming support.”

His friend Jayda Shreenan remembered a witty, funny friend full of kind words for others, who loved to order pizza – and even received a Christmas card from the pizza delivery guy – but also baked bread and cookies, and cooked homemade noodle bowls, perogies and falafel.

“When I was hungry, I avoided his Instagram feed at all costs,” Ms. Shreenan said. “He loved to cook and he loved to share the meal with his friends.”

Ms. Shreenan also suggested she was with Mr. Segura when he died.  “Myself and a couple of friends were with him right at the end, and I want you all to know that Jordan was not alone.

“He wasn’t alone when he was living life to its fullest – he was surrounded by his friends – and right at the end he was not alone.”

Pastor Wes Gorman said Mr. Segura’s mother, Maxine Patricia Segura, told him how her son would knit hats for others on the bus on the way to school.  His mom was worried he would get beat up or teased. “He didn’t care. His love for others never failed,” Mr. Gorman said. 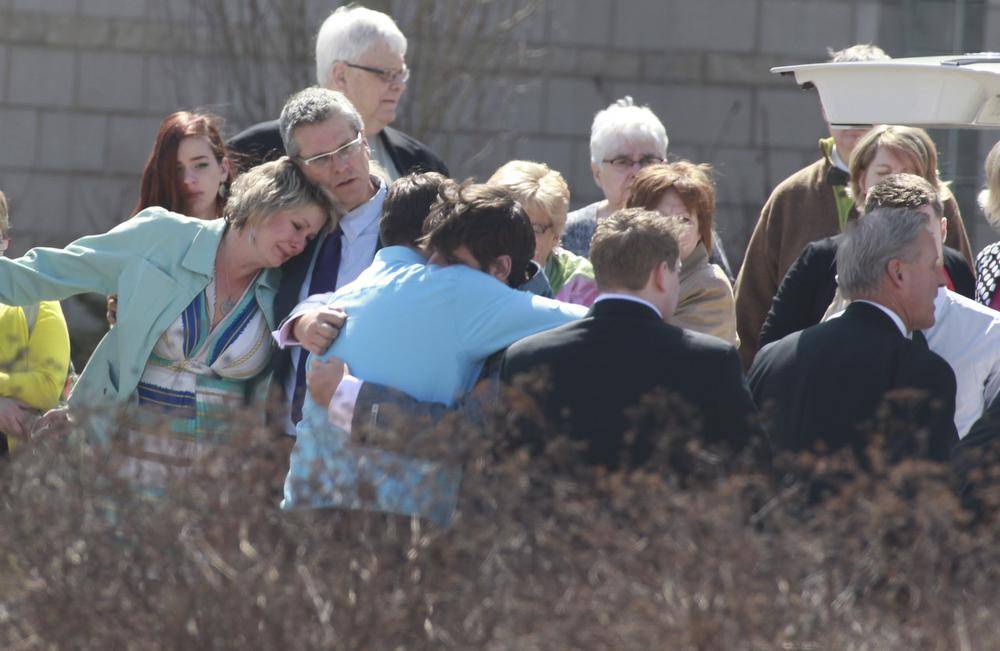 Friends and family were encouraged to wear colourful attire to Kaiti Perras’s funeral on Monday. That was an order from Ms. Perras, a fashion maven described as having an earthy, bohemian style.

“I don't want anyone to wear black to my funeral,” she had said in the past, according to family member Galen Perras, who spoke at the funeral on behalf of the family.

Many mourners gathered at Calgary's First Alliance Church lived up to the request, with one wearing hot pink shoes with a matching top.

“I first want to thank those of you who dressed interestingly today,” Mr. Perras said.

He bought a bow tie specifically for the day, because Ms. Perras loved bow ties. It took three people and a YouTube video to get it on, he said, drawing laughter from the mourners.

Mr. Perras thanked all those who reached out with flowers, food, words and money for the dance scholarship fund set up in Ms. Perras’s honour.

“This has been beyond devastating for us," he said. "Devastation does not‎ describe it. We are overwhelmed by all of it.”

He later added: “We also wish, of course, for you to think of four other young men” who were killed. “We reach out to those families‎ in our mutual horror in the face of savagery.”

Ms. Perras’s love of dance was a constant theme at the funeral.

“It was her heart and her gracious spirit that made ‎her exceptional,” said Shannon Hearn, one of Ms. Perras’s dance mentors.

Sandy Koskie said, again speaking on behalf of the family‎, said: “When she was dancing, she was truly free.” 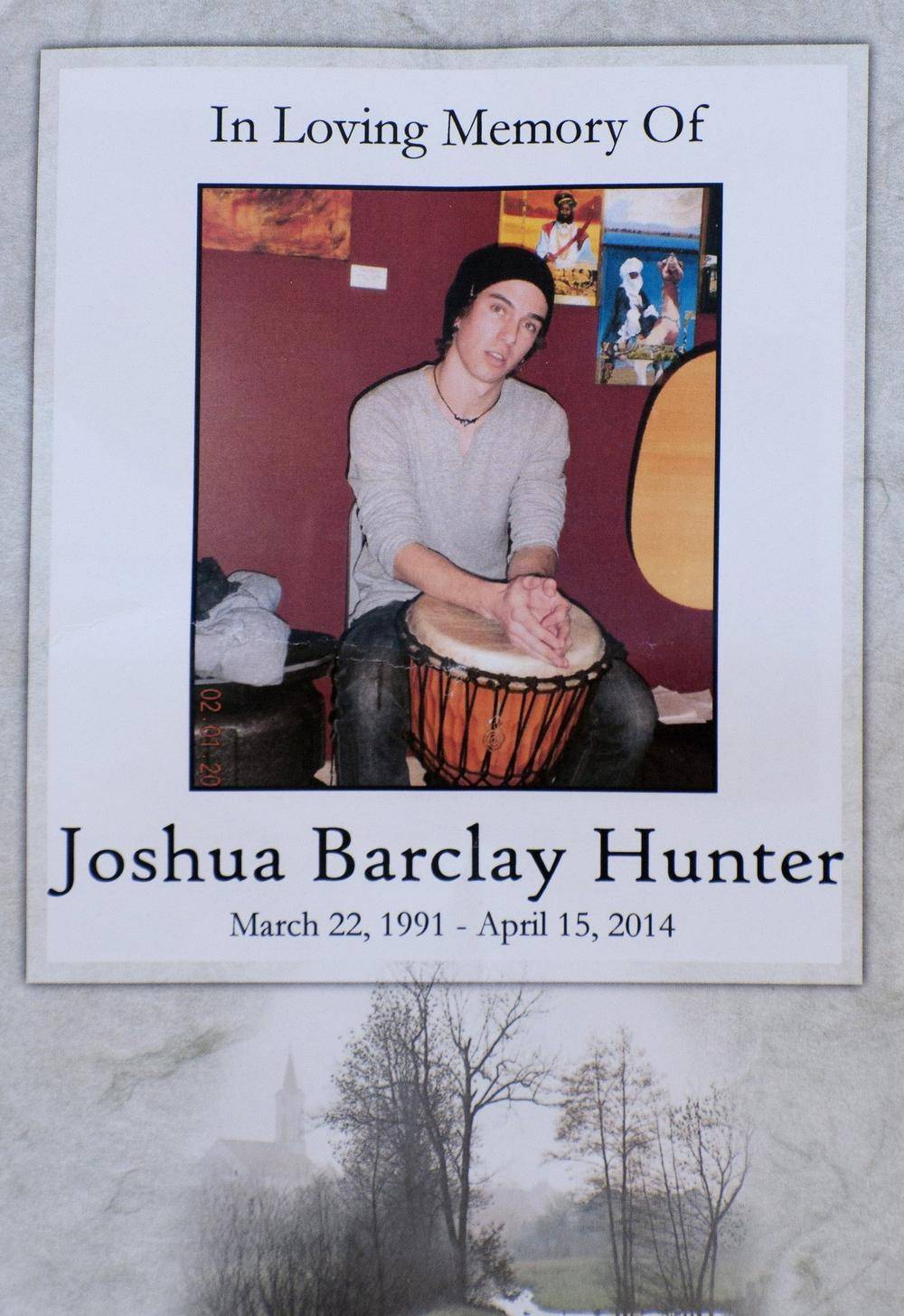 Josh Hunter’s funeral was held at the Anglican Christ Church in inner-city Calgary on Monday. Family friend Peter Gammell said Mr. Hunter – who had just finished the second year of a commerce degree at the University of Calgary – had the intelligence of “an old soul. Like that person is in possession of a secret that overrides all other wisdoms. They seem to know something we don’t.”

Mr. Gammell described the confident 23-year-old as caring and considerate, a brother who made snow forts with his sister Michaela, and an intense music over who was an integral part of the local funk-rock band Zackariah and the Prophets.

Editor's note: An earlier version of this story contained incorrect information. This version has been corrected.