Once again a threatening obscenity uttered in public has cost a Canadian man, as Calgary police have charged a passenger in a truck for shouting an insult at a female news reporter.

The now-infamous words, echoing around the world, have suddenly run into a wall of revulsion in Canada. And those who engage in the trend of harassing women on videotape are starting to feel repercussions.

Calgary police fined a passenger in a truck $402 for "stunting" – engaging in activity that distracts, startles or interferes with drivers, under Alberta's Traffic Safety Act.

In a separate incident in Toronto this week, Hydro One Inc. fired a man from his $107,000-a-year job after he said in a widely broadcast interview that yelling obscenities at female broadcast reporters is "amazing."

"The funny thing is that these people who do it are really stupid because most of us are recording," Meghan Grant, a Calgary CBC reporter who was on the receiving end of the obscenity that resulted in the $402 ticket, said in an interview. "We get their faces or their voices or their licence plates. We've been able to show there are repercussions."

She called the response by the Calgary police "perfect."

"A $400 fine sends a message. It doesn't leave him with a criminal record. I'm really glad that the Calgary police have essentially told the community that they're prepared to take this seriously."

Ms. Grant was working on a story on April 24 about one man's campaign to make a part of 17th Avenue known as the Red Mile – a strip of bars and restaurants popular with Calgary Flames fans – safe for women. There had been reports of obscenities and groping after games.

"We were out on the Red Mile, broad daylight, there was not a game on, it was late morning, and we're doing an interview about this movement to keep things positive in postgame celebrations," the radio, TV and online reporter recalled. "And somebody in a truck pulls up behind us and screams the saying" – a threatening obscenity known by its abbreviation FHRITP. The cameraman caught the licence plate number, and Calgary police investigated.

The driver "must have handed over his friend to them," said Ms. Grant, who has been with the CBC for seven years.

She said it was not the first time someone had shouted the obscene comment at her. "It's discouraging, and it's frustrating, and I don't say that just because it's disruptive to reporters who are doing their jobs. There are really concerning tones of sexism behind it. It's always discouraging when you're reminded that that is going on in society."

Her first response at learning the police ticketed the man was to announce it on Twitter. She said the investigating officer told her the man apologized and felt embarrassed. But "he hasn't apologized to me," she tweeted.

She said the man can go to trial to fight the ticket. A police spokesperson said she did not know whether the man had done so. The man's name cannot be released under the Traffic Safety Act, police said.

Alberta's fine for stunting increased to $543 on May 1.

The issue of on-air harassment of mostly female reporters has been widely broadcast since CityNews reporter Shauna Hunt confronted men on television after a Toronto FC soccer game last Sunday to ask why they joined in a degrading activity.

Herd misogyny overlooks the personal
May 15, 2018 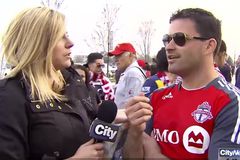 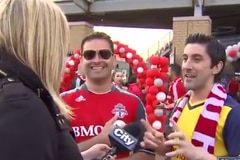 Sexually explicit taunts must be confronted, Justice Minister says
May 15, 2018 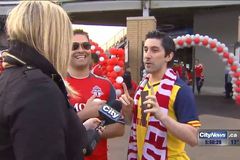 Dismissal of Hydro One staffer could lead to severance payout
May 15, 2018 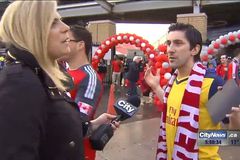