An eight-week investigation by the Calgary police drug unit into a fentanyl trafficking operation has yielded charges against four men.

Police say the investigation began in October after a tip from the public.

Lab analysis of some of the fentanyl pills showed that they contained two to three times the average lethal dose per tablet.

A search of two homes in Calgary's northeast on Thursday yielded 65 fentanyl pills, but police believe the suspects had access to and sold a large amount.

The four men face a total of 38 charges that include trafficking fentanyl and possession of the proceeds of crime.

Police have also laid drug-related charges against 11 other people after finding thousands of fentanyl pills and other illegal narcotics during eight police raids last week. 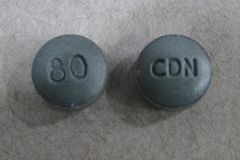