The young Calgary woman who was targeted in a swatting incident just days before Christmas is a video gamer and fitness vlogger with a substantial online following who had been livestreaming for more than eight hours when tactical units descended on her apartment with guns drawn.

In a livestream from a technology convention in Las Vegas this week, the 24-year-old gamer named Lisa Vannatta, who is known online as STPeach, said she was "terrified" by the ordeal.

"I didn't really want to talk about it but back when I was streaming for the Christmas event, I actually got attempted to be swatted," she told viewers who inquired about the Dec. 22 incident. "So, somebody had swatted me but it never happened on stream. … I was terrified, honestly. It was actually really scary."

Tyler Raj Barriss, a 25-year-old Los Angeles man with an alleged history of swatting – phoning authorities to report hoax emergencies such as bomb threats and hostage situations to elicit a huge police presence – has since been charged with three counts of mischief and fraud charges in relation to the Calgary incident.

He has no known connection to Ms. Vannatta but is believed to have watched part of her livestream that day, when she had dressed as Mrs. Claus and given away prizes such as microphones and gamer gloves to her viewers.

Calgary police had received a call that evening from a man who said he had shot his father and was holding his mother and younger brother hostage, giving an address in Calgary's Bankview neighbourhood.

At the same time, Ms. Vannatta, who lives at that address, was engaged in what was supposed to be a 12-hour livestream session on the video platform Twitch, where she has amassed 585,000 followers and often broadcasts herself playing video games. Her online footprint also includes 586,000 followers on Instagram and 132,000 on Twitter. As officers contained the scene and began evacuating nearby units, the woman received a warning from someone online that she may be the victim of a swatting call. She then phoned police to relay the information and police confirmed that the initial report of a shooting and hostage situation was a hoax.

"It's very frustrating because we have to take these calls seriously, we have to take them at face value," Calgary Police Service Acting Deputy Inspector Peter Siegenthaler said. "It puts not just officers, but the public at risk."

The livestream session ended suddenly, with viewers commenting and wondering what had happened.

Police say they believe she was targeted for no reason other than because of her online presence. The investigation into how her home address was obtained is still continuing.

Ms. Vannatta apologized for the abrupt ending in a message posted to Twitter the following day: "I would never do that unless I thought it was completely [necessary] or an emergency," she wrote. "Hope you all understand. Thank you for everything." A man with the same name, age and city of residence as Mr. Barriss is charged in connection with a similar swatting incident that occurred six days later in Kansas that led police to fatally shoot an unarmed man.

In that case, a man phoned police claiming he had shot his father in the head, was holding his mother and younger brother at gunpoint and had doused the home with gasoline. SWAT officers surrounded the home expecting a hostage situation.

When resident Andrew Finch, 28, answered the door, officers told him to put his hands up and move slowly. Deputy Chief Troy Livingston said that Mr. Finch moved a hand toward the area of his waistband and was shot by an officer who feared he had been reaching for a gun. Mr. Finch had been unarmed.

"The police have been in contact with me, trying to figure out if it was the same guy, you know, and I was trying to help them out with everything," Ms. Vannatta said on this week's livestream.

Mr. Barriss is currently being held without bail in Los Angeles in connection with the Kansas case. He is scheduled to appear in court Jan. 17. 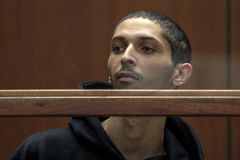