Violent winds that fanned fierce wildfires and pushed a heavy haze of smoke and ash toward the Northern Ontario town of Timmins this week were on the wane Saturday, stirring hope among some residents displaced by the crisis.

"It's not completely under control yet, from what they're saying, but they're making it sound pretty good," Denise Chiasson said after emergency officials delivered an update on the fires that have ravaged rural areas near the city since last Sunday.

She and her husband, Richard, were forced out of their home at the Old Mill campground Friday after powerful gusts knocked down a power line, sparking a new blaze.

Fire crews were still fighting the flames there Saturday, with some progress, officials said.

"They gave us five to 10 minutes to evacuate and we had to leave immediately," abandoning furniture and other precious belongings, Mr. Chiasson said. The pair live at the campground year-round while renting out their home in the city.

Timmins Mayor Tom Laughren praised fire crews for waging an "aggressive" war on the flames and stressed the city of 43,000 is "in no immediate danger."

"The fact the city declared a state of emergency doesn't mean we are planning to evacuate Timmins, it means that we are at the ready, with external support, should the situation worsen," he told those gathered for the daily briefing at the McIntyre Arena.

"At this juncture there is no immediate threat but it doesn't hurt to be prepared."

The main concern for Timmins residents has been the heavy, choking smoke that has drifted over the city at various times throughout the week. The acrid air, however, was starting to clear as winds in the area shifted Saturday.

The change in weather bolstered firefighting efforts that had previously been hampered by strong gusts which limited the use of water bombers, a spokeswoman for the Ministry of Natural Resources said.

Michelle Nowak said the size of the fire some 30 kilometres outside Timmins was estimated at about 41,210 hectares Saturday, or roughly 70 kilometres by 10 kilometres. It had grown from 31,660 hectares the day before, but didn't come closer to the city.

Meanwhile, an evacuation order for the lakeside community of Kamiskotia on the outskirts of Timmins was lifted Friday night as a heavy haze that blanketed the area suddenly cleared.

Roughly 300 people were allowed back into their homes, but all other evacuation orders remained in effect.

Another 800 were still barred from their cottages, campgrounds and camps. And an evacuation order issued earlier this week also saw residents from the nearby Mattagami First Nation relocate to Kapuskasing.

Daniel Geoffroy returned to his home in Kamiskotia late Friday and noticed a significant improvement.

"Tuesday night, the smoke was really, really bad," he said. "It smelled like if you're near a dump and they're doing a burn, it smelled like that. It didn't smell like a nice bush fire."

"The skies were a really, really nasty, colour. The sun was like a red ball... It was eerie," he said. "I think if the wind had kept going... in the same direction, I think we would be having more problems."

Provincial police said they are tracking the blaze and its fumes, ready to clear out any homes in the path of danger.

"Our primary focus is on security of persons who have chosen or by accident are ignoring the order to evacuate the area," said provincial police spokesman Marc Depatie.

But even as conditions seemed to improve Saturday, some residents said the situation has them on edge.

"Everybody's worried because we've got our life over there," said Eric Germain, who watched emergency crews from the fringes of the evacuation zone.

Mr. Germain said he and his family were told to leave their camp just west of the city on Sunday. Since then, the flames have also shut down the gold mine where he works.

So far, he said, there hasn't been any damage to his property, but a friend lost several pieces of heavy equipment to the blaze.

A fire ranger dispatched to battle the blaze described 17-hour days grappling with flames "big enough to eat trees in a gulp."

At one point, smoke from the Timmins fire was blowing toward Kirkland Lake, about 140 kilometres southeast, even as fire crews there tackled the remnants of a separate massive wildfire.

But emergency officials in the community of almost 10,000 said things were looking up Saturday, with the blaze reduced to 2,635 hectares from 2,757. It was not, however, under control.

Evacuated residents along the Goldthorpe Road area were told they could return home as early as 6 p.m. Saturday, while some residents on Goodfish Lake Road could go back home by 10 a.m. Sunday, pending any changes in conditions.

Schools in Kirkland Lake were shut down as a precaution Friday, as was the community's courthouse.

No relief from extreme burning conditions was expected in the northeast of the province until at least Sunday, the ministry said.

Throughout Ontario, some 1,300 people, 15 CL-415 water bombers, four Twin Otter medium water bombers and 77 helicopters were on hand Saturday to battle the flames from an estimated 46 active fires. 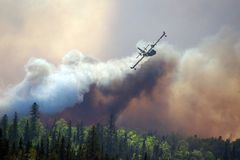 Raging wildfire leaves Timmins, Ont. in state of emergency
May 25, 2012 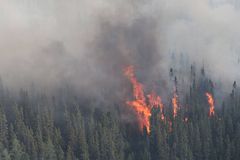