Canada 150 from coast to coast

See how people are celebrating Canada Day across the country. 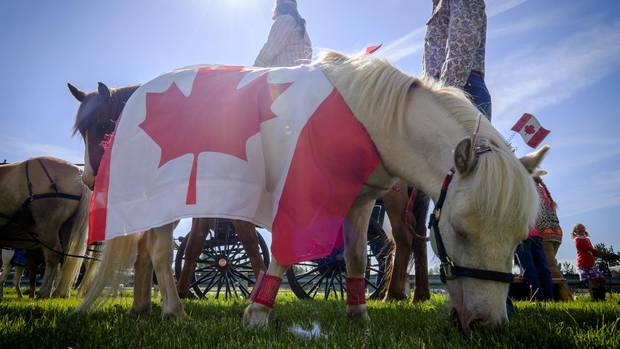 Winnipeggers got together today to celebrate Canada's 150th birthday by forming a "Living Leaf" at the historic downtown intersection of Portage and Main, Saturday, July 1, 2017. Organizers said that 4000 people showed up to show off their love for Canada.

Security has never been tighter for a Canada Day party on the Hill, and despite an initial police crackdown, Indigenous activists successfully set their tepee up at the foot of the Peace Tower and saw their message reverberate across the country.

In a video filmed inside the tepee and posted on Facebook, Mr. Trudeau told protesters their impromptu discussion symbolized the inherent difficulties of creating "nation-to-nation" discussions and getting out of "colonial structures."

The Canada Day agenda in the national capital included a visit from Prince Charles and the Duchess of Cornwall and a speech from Prime Minister Justin Trudeau.

Trudeau and the prince sat down for a meeting this morning at Rideau Hall, where the two commiserated briefly about the conditions outside.

"We're Canadians," Trudeau was heard to say over the din of camera shutters. "We can handle a little weather."

– Daniel LeBlanc and The Canadian Press

A giant rubber duck that caused feathers to fly for weeks before its arrival has settled into its temporary new home on Toronto's waterfront for Canada 150.

The six-storey-tall yellow duck was inflated on Toronto's harbourfront ahead of the weekend RedPath Waterfront Festival.

A colourful parade and a small protest are among the ways Canada's 150th birthday was marked in Montreal.

The parade route was lined with thousands of spectators on Saturday, many carrying umbrellas and waving red-and-white flags as they cheered groups of dancers who went whirling by.

But in another part of town, a handful of protesters marched through the city's Old Port to denounce what they call Canada's colonialist and racist policies.

About 20 people dressed in black threw coloured leaflets and chanted slogans as they made their way through one of the city's most crowded tourist areas, closely monitored by dozens of uniformed police officers.

In a speech, one of the organizers said there is no reason to celebrate Canada's 150th birthday due to way the country treats immigrants, indigenous people and the environment.

Montreal police say there were no arrests and no vandalism.

A traditional longhouse has been erected near the New Brunswick legislature, with a First Nations elder saying it's not to protest Canada 150 but to educate that indigenous people were present long before Confederation.

Alma Brooks of the Wolastoq Grand Council says the temporary structure on the Fredericton riverfront is a place of teaching and "a chance to celebrate time immemorial."

"It's not a protest. Hopefully it will be a way of opening the door a crack for discussions around many long term issues that have been ignored," she said Friday.

The birch structure in Fredericton, covered with tarps and cedar brush, is oriented east-west on a grassy strip along the edge of the St. John River.

It's an area frequented by people who walk and jog, and a good vantage point for Canada Day fireworks.

Fifty-three people from more than 20 different countries celebrated Canada's 150th birthday by taking the oath of citizenship in Halifax.

Members of the crowd joined the Canadians-to-be as they raised their right hands and vowed to fulfil their duties as citizens.

Politicians from all three levels of government lined up to congratulate their new constituents as they received their certificates of Canadian citizenship.

The ceremony was held at the Pier 21 immigration centre on the Halifax waterfront, where more than one million immigrants took their first steps in Canada between 1928 and 1971.

MORE FROM THE GLOBE AND MAIL: